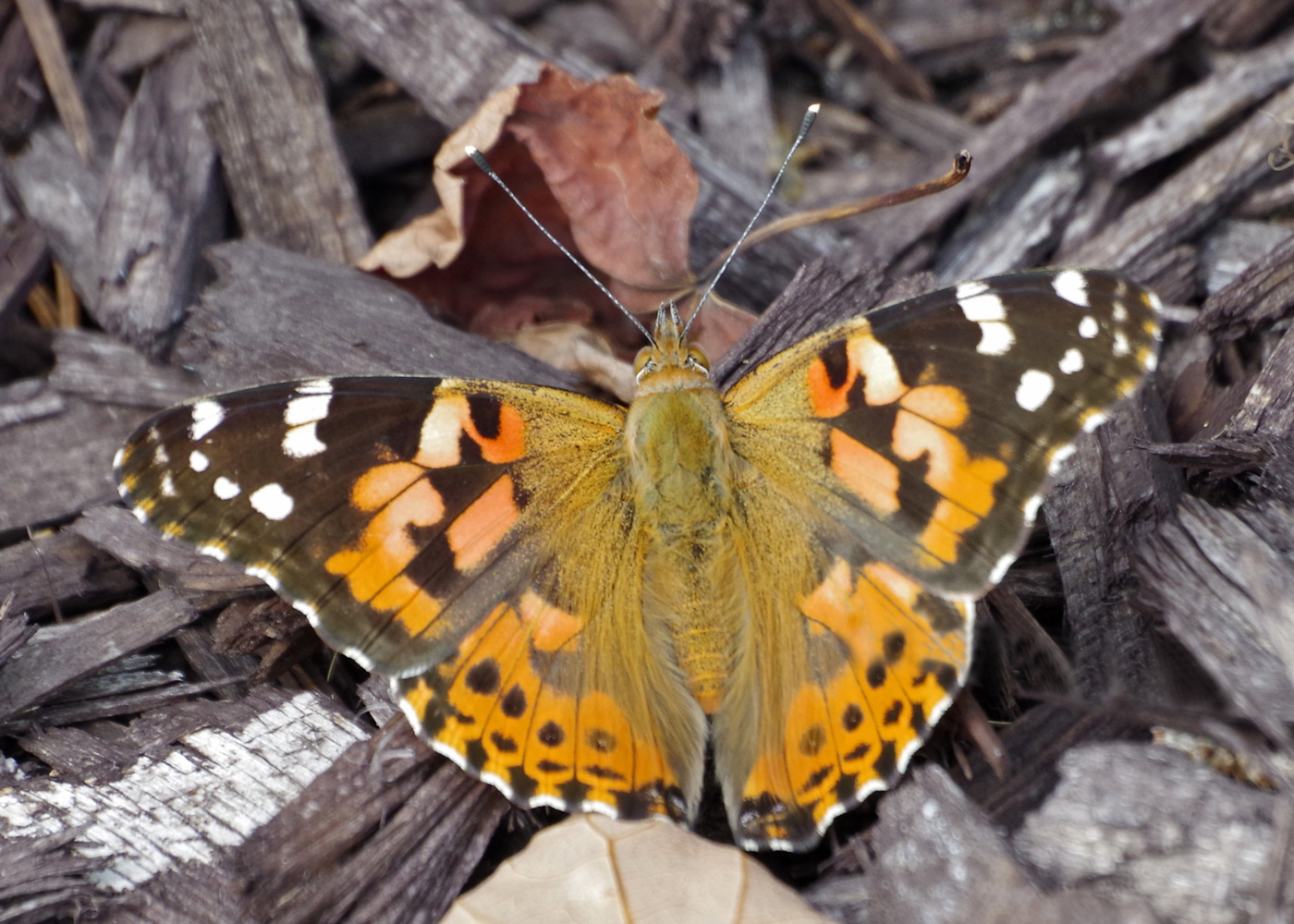 Note: Some links below go to external sites.

The general rule of thumb is that if you want to find insects, look at flowers. Even though summer is fading, there are still flowers in bloom. Some Liatris/blazing stars linger, along with brown-eyed Susan, wild sunflowers, asters and goldenrod (more than a century ago, Asa Gray said that the 12 pages about goldenrods in his Manual of the Botany of the Northern United States, from New England to Wisconsin and South to Ohio and Pennsylvania Inclusive (aka Gray’s Manual) were the most uninteresting in the Manual). Late summer and early fall are dominated by flies, bees and wasps, and by grasshoppers, katydids, and crickets.

Most adult insects die by the first frosts, leaving behind the next generation in the form of eggs or pupae (occasionally as nymphs or larvae), so the clock is starting to tick pretty loudly. As BugFan Mary stated dispassionately many years ago, they’re dead and they don’t know it yet. Meanwhile, their activities are centered on eating and on producing the next generation. 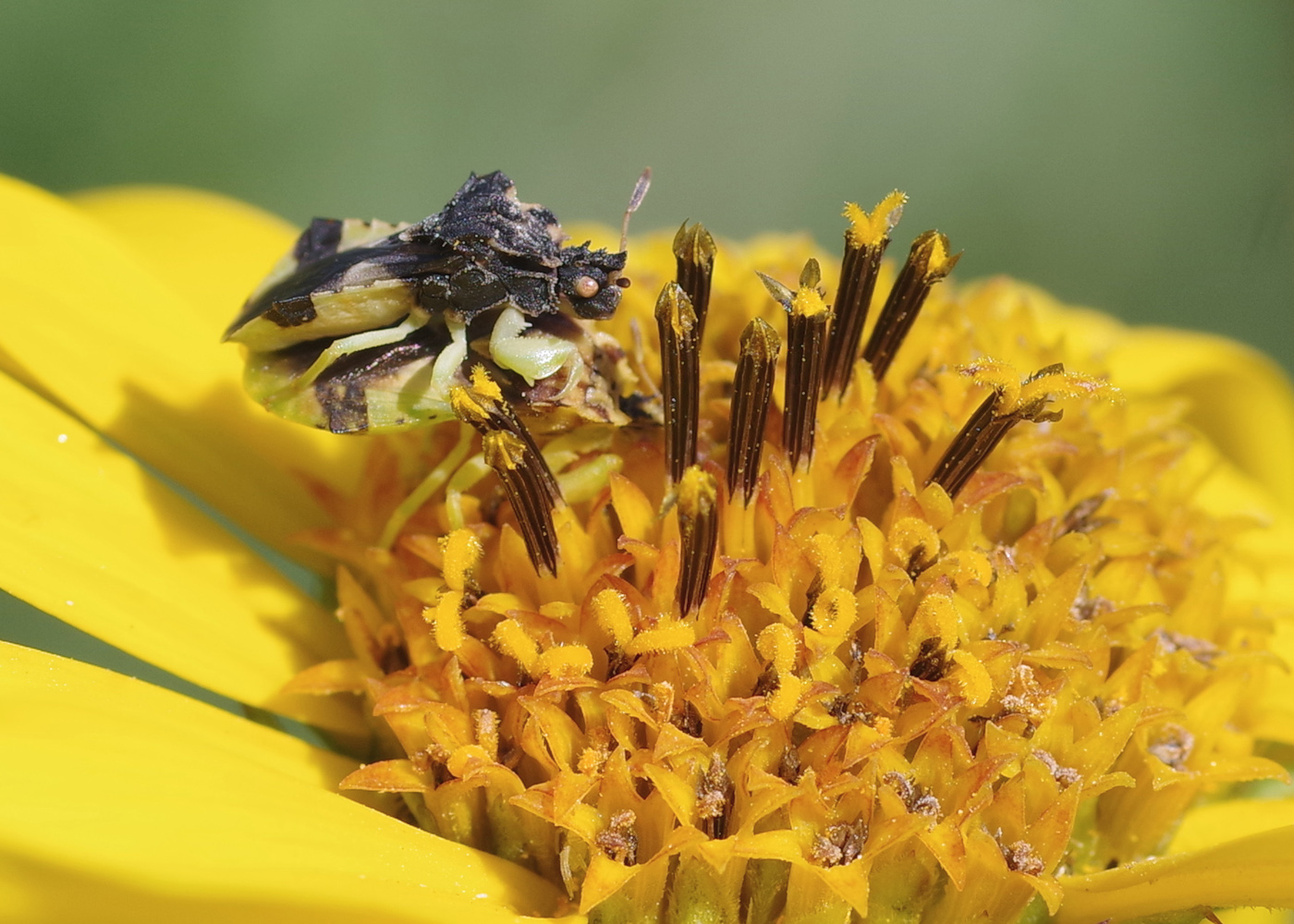 AMBUSH BUG – One of the BugLady’s favorite insects is the ambush bug (she’s always had a soft spot in her heart for predators). Ambush bugs tuck themselves down into the middle of a flower and wait for pollinators. They grasp their prey with their strong front legs, inject a meat tenderizer, and slurp out the softened innards. They’re paired up these days (the BugLady has a picture of a stack of three), and she has several pictures where the female is multitasking – eating an insect while mating. 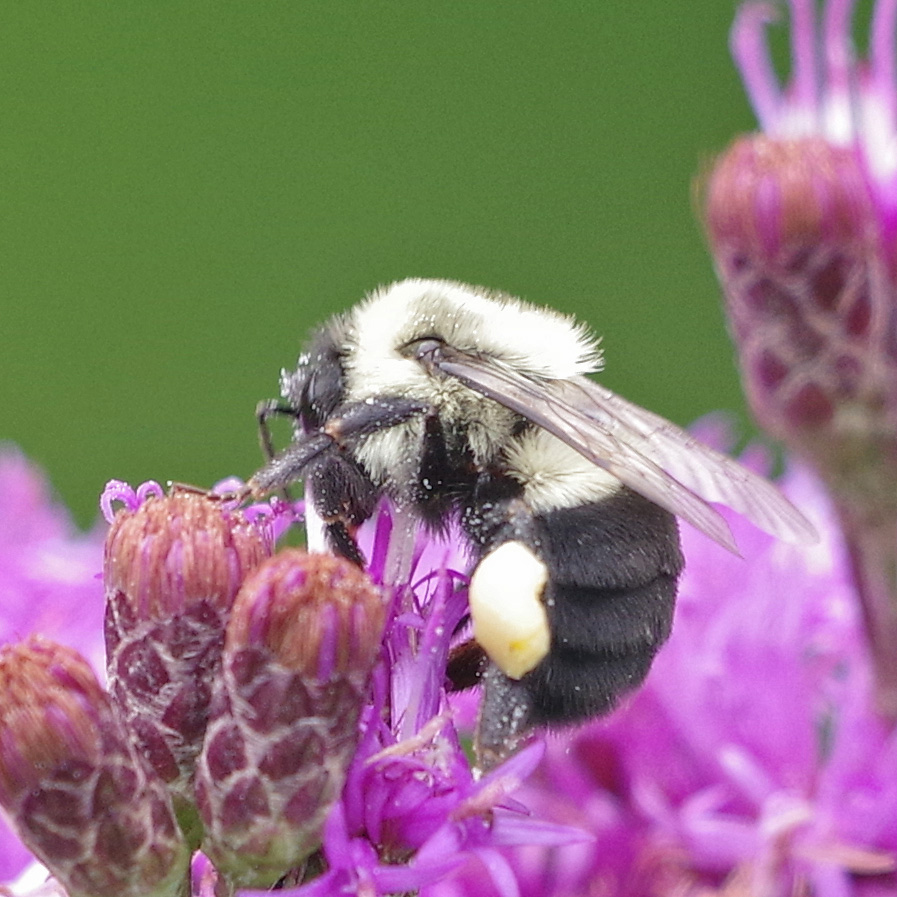 BUMBLE BEE – A bumble bee forages for nectar and pollen for the brood well into September, but the brood will not survive the winter. Only the newly-fertilized queens will see the spring and establish a new colony. Moral of the story – plant Liatris/Blazing star. 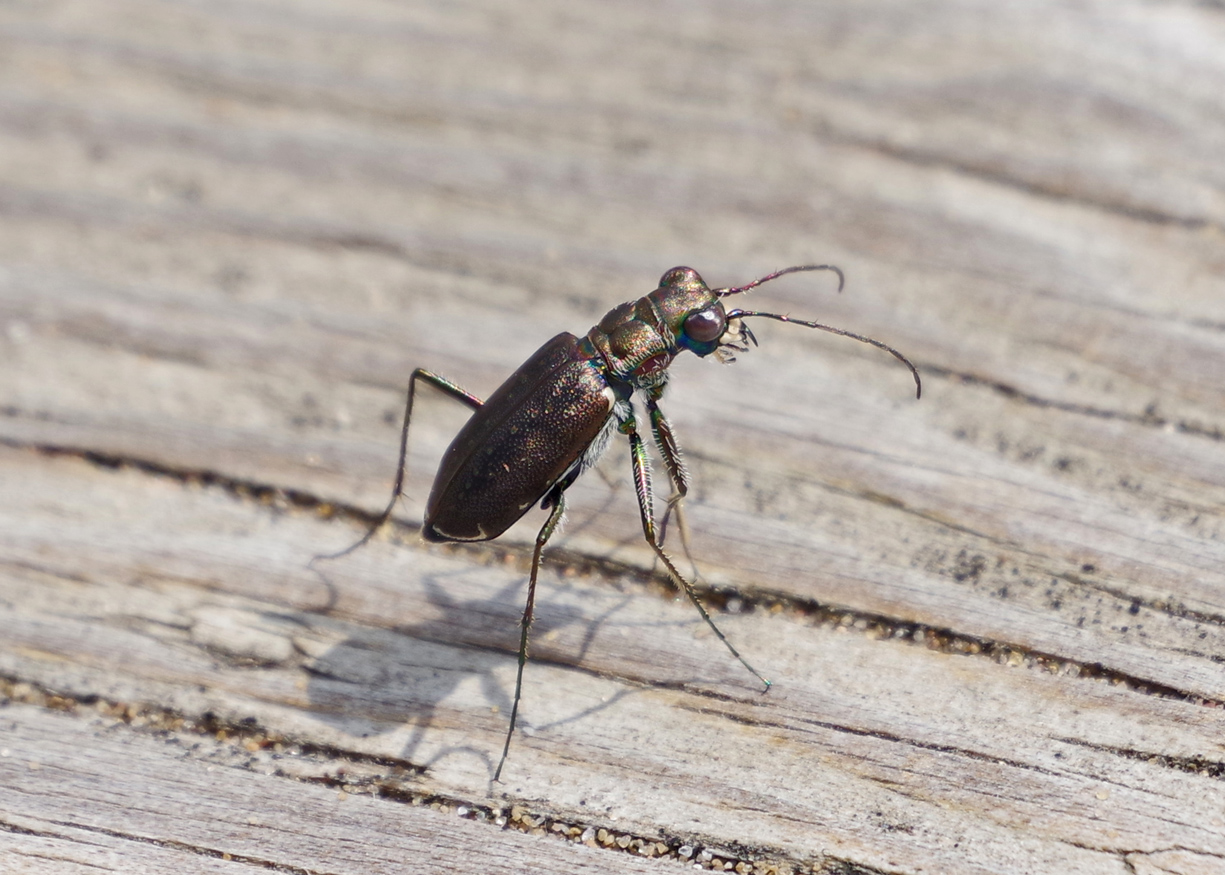 PUNCTURED TIGER BEETLES (aka Sidewalk or Backroad Tiger Beetles) are named for the rows of pits on their very-slightly-iridescent elytra (hard wing coverings). They’re common across the continent in dry, sandy, bare spots, and as one of their names suggests, they’re sometimes seen on sidewalks. Like their (much) larger namesakes, Tiger beetles chase their prey. Find more information about it here. 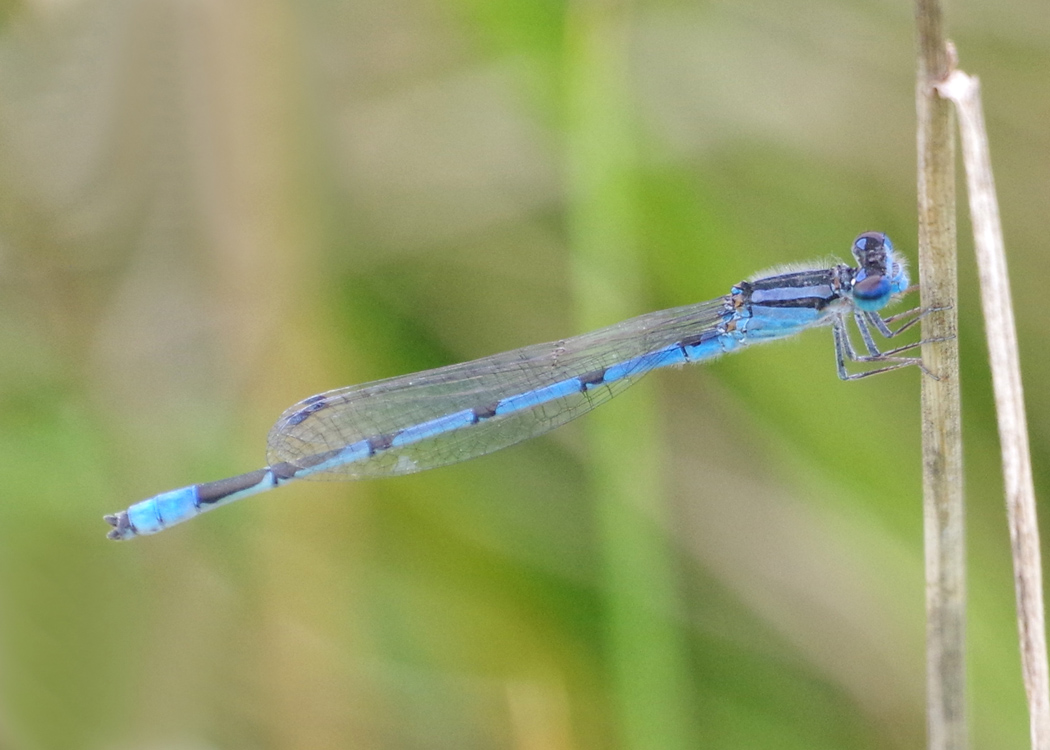 FAMILIAR BLUETS signal the end of the damselfly season. Big, robust, and startlingly-blue, they’re one of the BugLady’s favorite bluets. 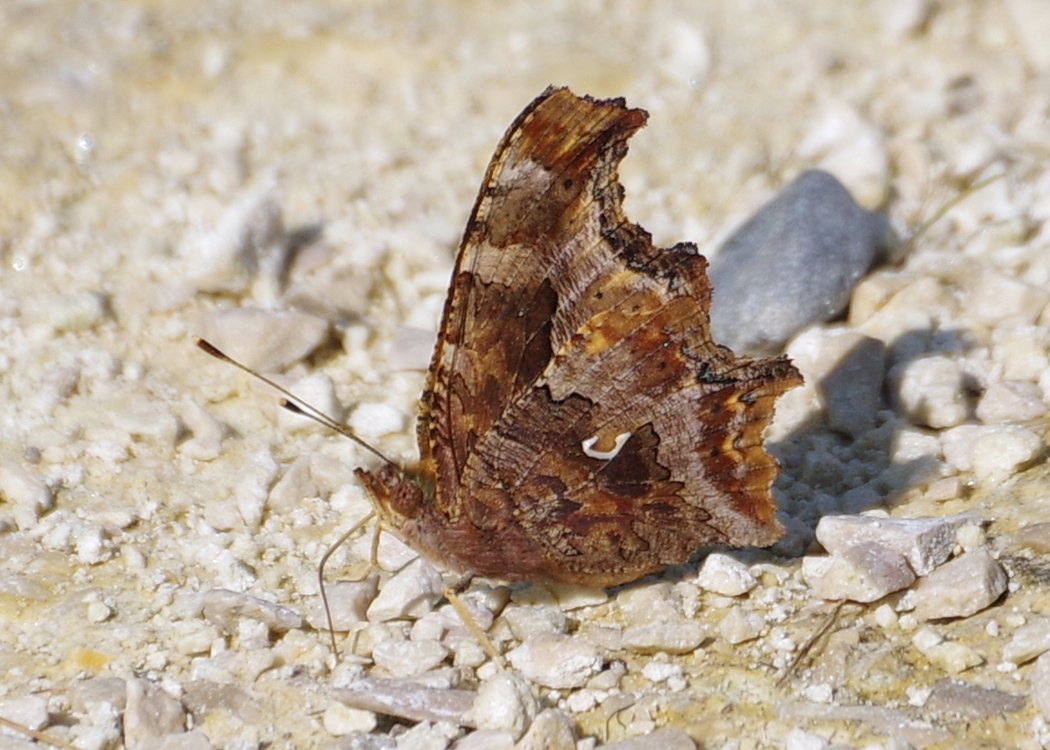 EASTERN COMMA – There are two generations/broods/”flights” of Commas (and Question Marks – the “anglewings”) each year. The second generation overwinters as adults, tucked up into a sheltered spot (a hibernaculum). They sometimes emerge during a January thaw, but they quickly resume their winter’s sleep. They fly briefly in spring – one of our early butterflies – and produce the summer brood. 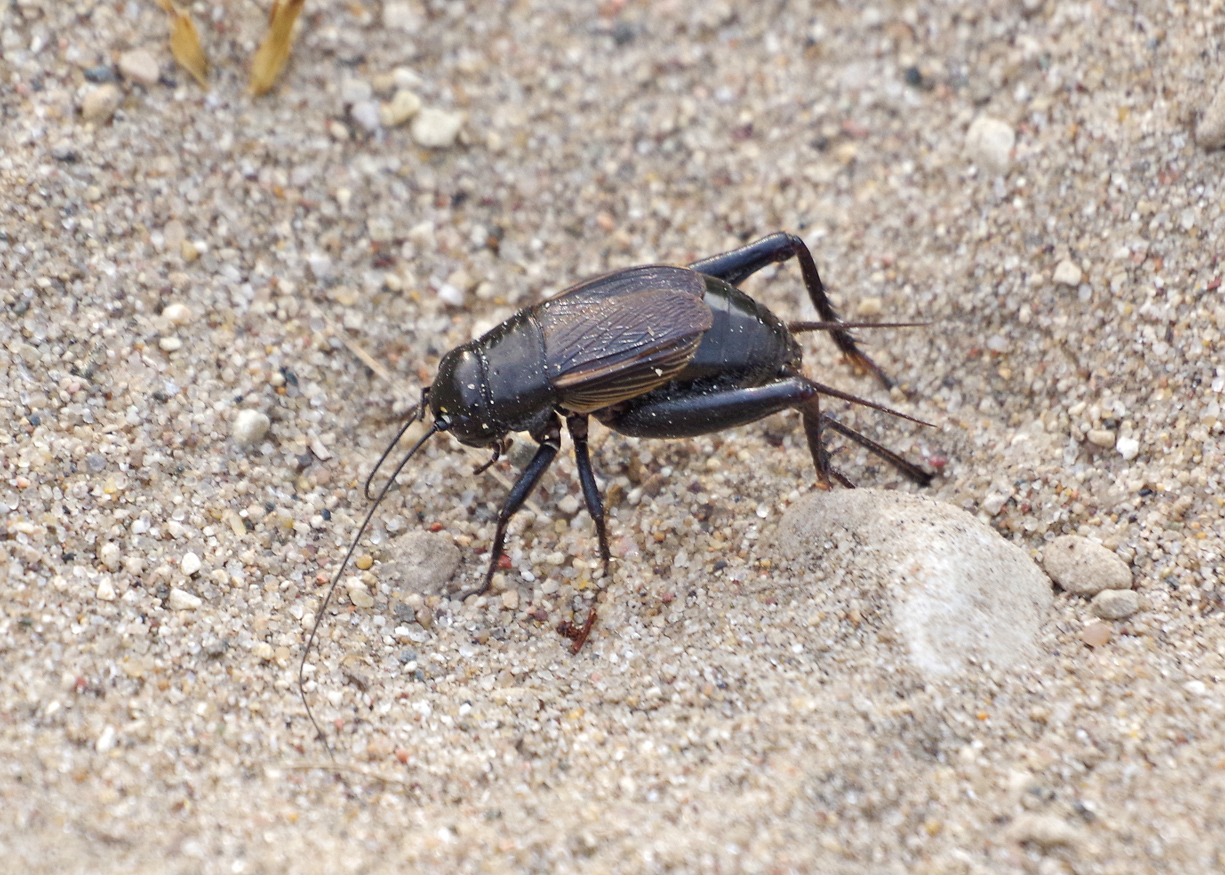 FALL FIELD CRICKET – Poking her ovipositor into the soil and planting the next generation. Her eggs will hatch in spring, and her omnivorous offspring will eat leaves, fruits, grain, and other invertebrates.

The BugLady loves their simple songs and is happy when a cricket finds its way indoors in fall. Males form a resonating chamber by setting their wings at a certain angle; then they rub their wings together to produce sound (one wing has a scraper edge and the other has teeth). There are mathematical formulae for calculating the ambient air temperature based on cricket chirps that give you the temperature in the microclimate on the ground where the cricket is chirping (add the number of chirps by a single field cricket in 15 seconds to 40). 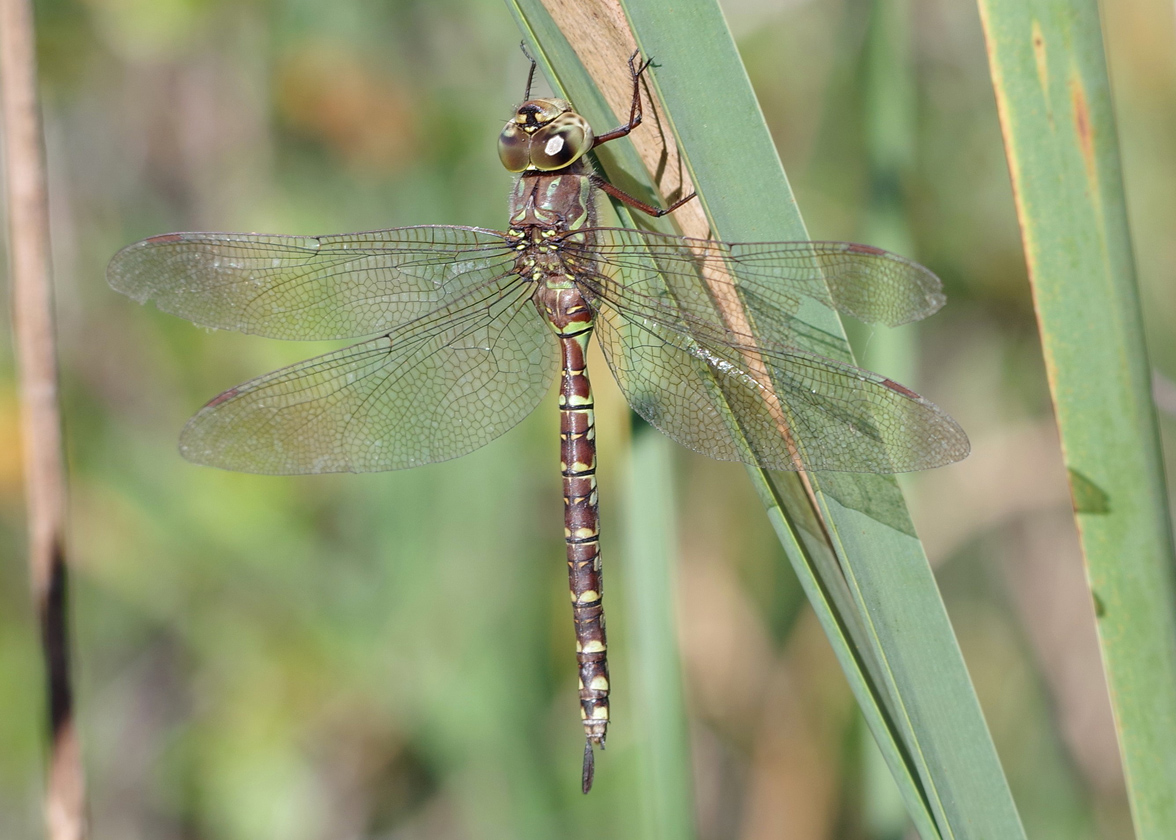 CANADA DARNER – Common Green Darners are robust dragonflies that fill the late summer skies with dramatic feeding and migratory swarms. There are other darners, though, primarily the non-migratory mosaic darners (like the Canada, Green-striped, Lance-tipped, and Shadow Darners) whose abdomens have blue and black, “tile-like” patterns. Identify them by the shape of the colored stripe on the thorax and by the shape of the male’s claspers (lest you think it’s too easy, females come in a number of color morphs – this is a green-form female Canada Darner). 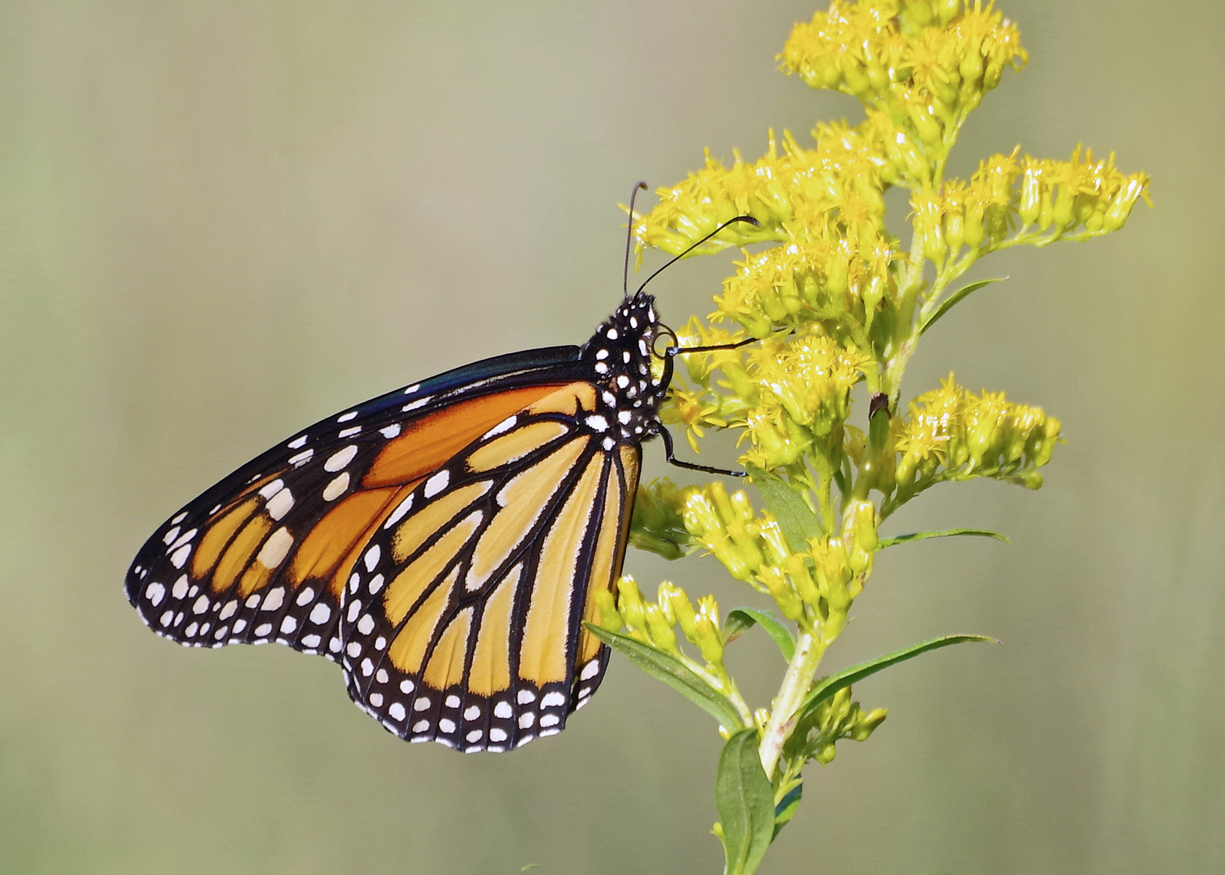 MONARCH BUTTERFLIES were alarmingly scarce this summer – the short-lived Gen 3 and Gen 4, whose job it is to build the population in the run-up up to the migratory Gen 5, simply weren’t there. But, on one of the BugLady’s recent stints on the hawk tower, she saw 289 Monarchs heading south during a six-hour watch. Moral – Plant goldenrod (and native milkweeds). 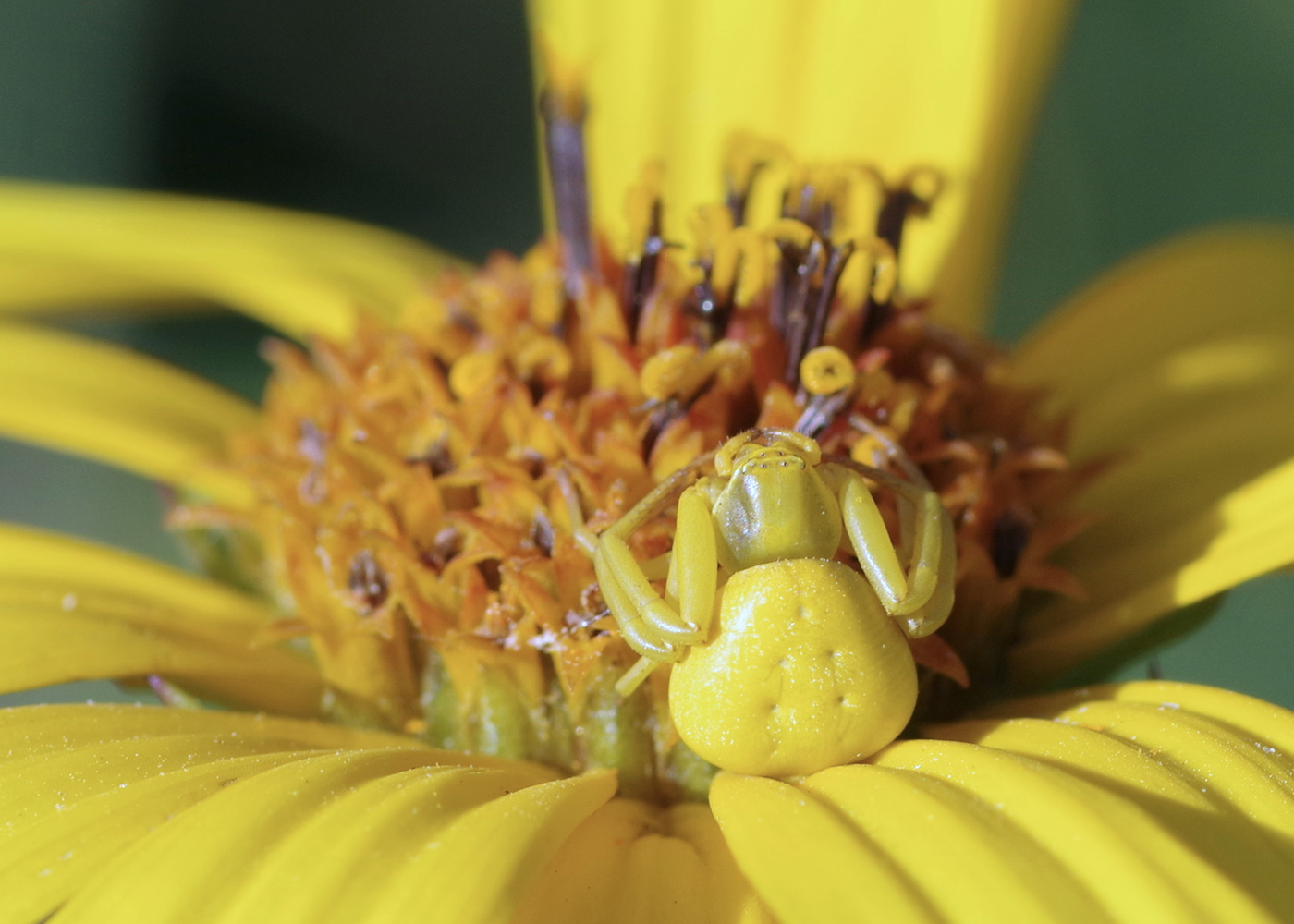 GOLDENROD CRAB SPIDER – Like ambush bugs, crab spiders live on a diet of pollinators. They don’t build trap nets and wait for their prey to come to them, they pursue it. Sometimes they lurk on the underside of the flower, but their camouflage makes hiding unnecessary. This female looks like she’s sitting at the dinner table. 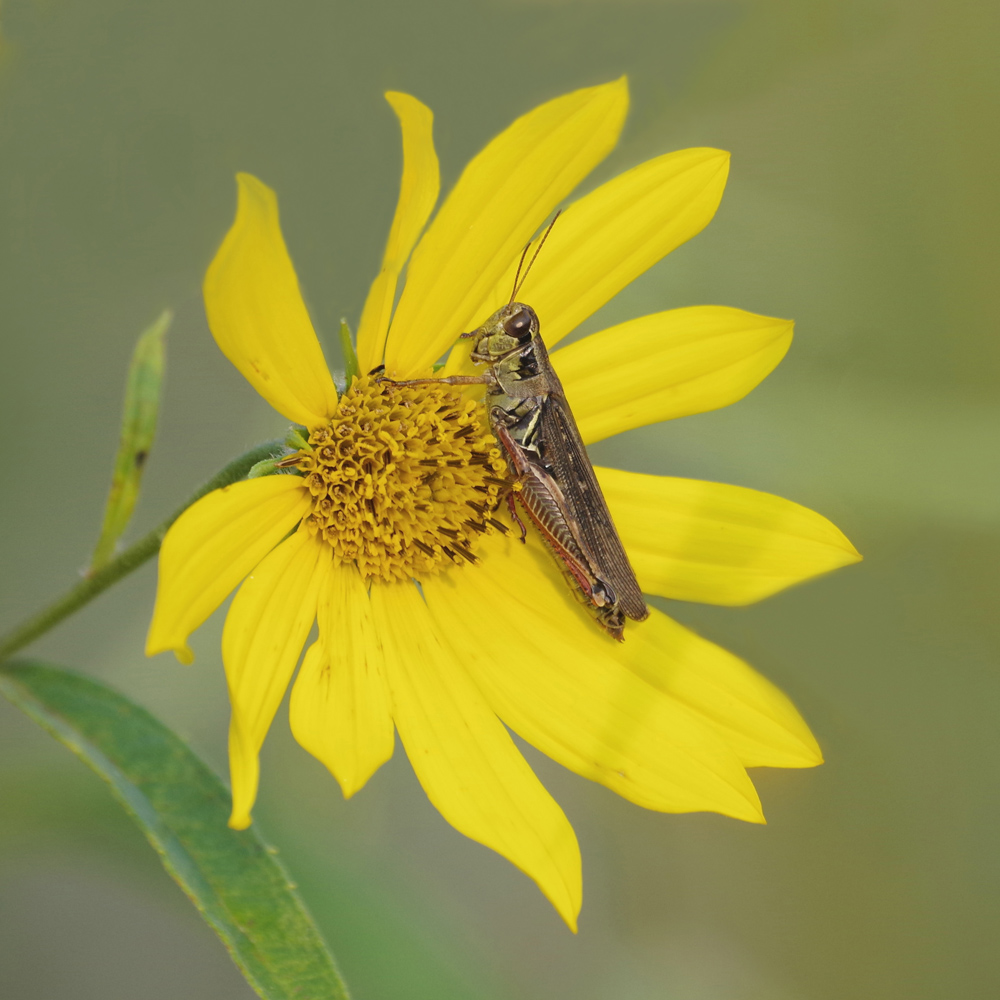 RED-LEGGED GRASSHOPPERS are very common in sunny grasslands at this time of year from coast to coast. They eat lots of different kinds of plants (including some agricultural crops, which does not endear them to farmers), but they prefer plants in the Legume/pea family and the Composite/aster family. As the air temperature increases – and when predators are around – they eat more carbs. Grasshoppers are food for spiders, many birds, and other wildlife. Moral of the story – plant wild sunflowers.

PAINTED LADY – You don’t get to be the most widespread butterfly in the world (found everywhere except Antarctica and South America) by being a picky eater. It migrates north in spring – sometimes in large numbers and sometimes in small. 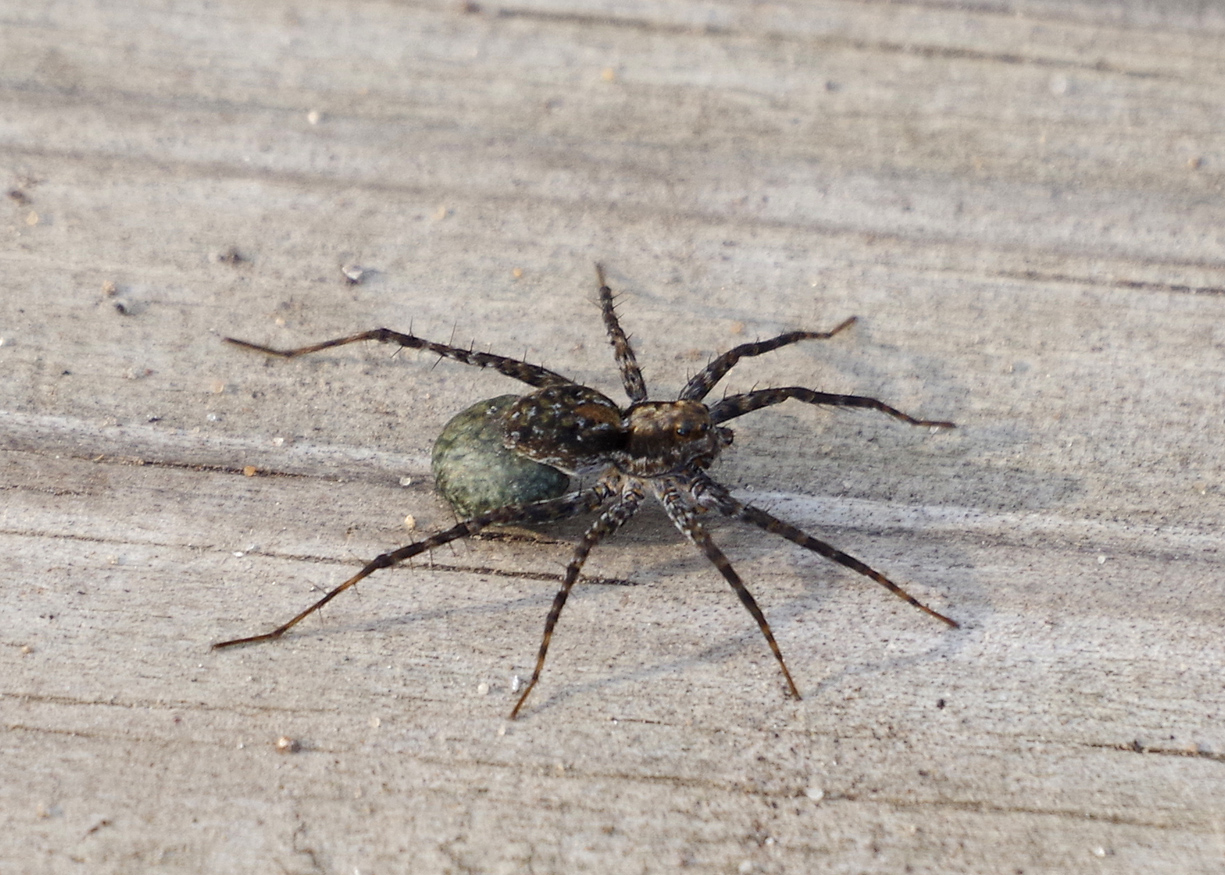 THIN-LEGGED WOLF SPIDER – This Thin-legged wolf spider formed an egg sac (with about 50 eggs inside), attached it to her spinnerets and is going about her business. When the eggs hatch, her young will climb up on her abdomen and ride around piggyback for a few weeks before dismounting and going about their lives. 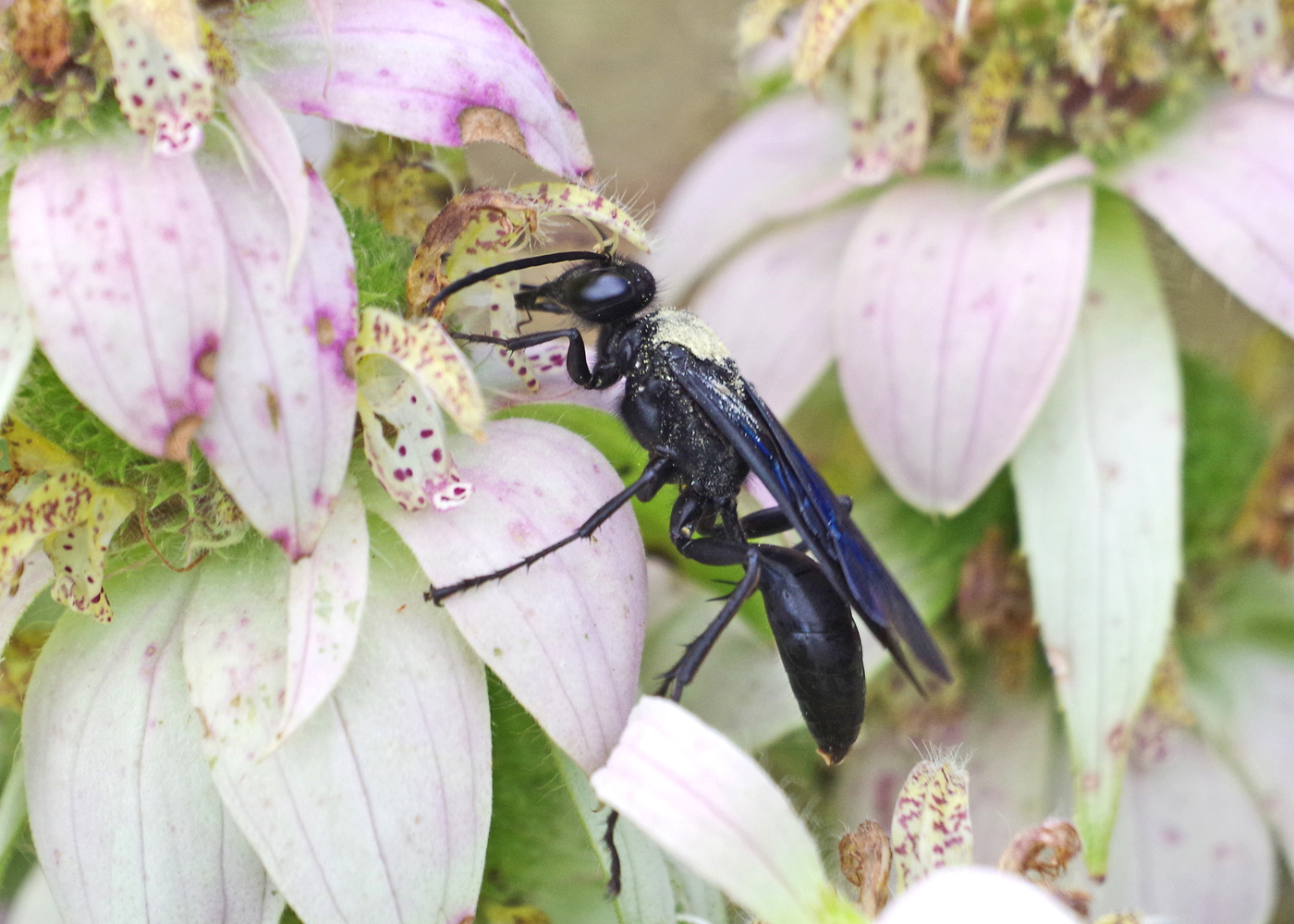 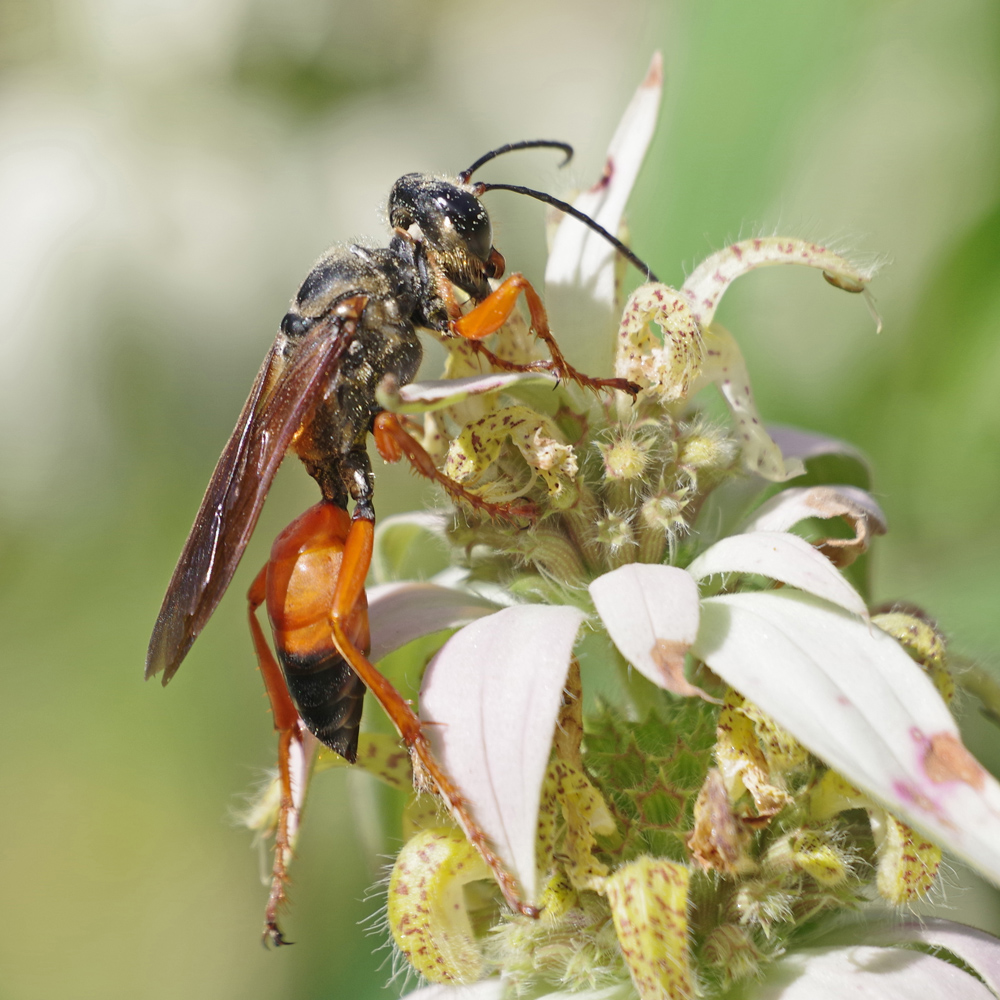 GREAT BLACK WASP and GREAT GOLDEN DIGGER WASP – Two impressive (1 ¼” long) wasps grace the flower tops at the end of summer. Both are good pollinators, both are solitary species that eat pollen and nectar, and both dig tunnels and provision chambers with paralyzed insects for their eventual offspring. Great Black Wasps select crickets and grasshoppers for their young’s’ pantry, and so do Great Golden digger wasps. Neither is aggressive.

The moral of the story? Plant lemon horsemint.