This one has “bugged” the BugLady for a while—a nemesis-bug. It photobombed shots of other insects and is so small (less than 1/8”) that the BugLady didn’t see it until she put a picture up on the screen, and then it defied identification. She could find insects with similar mouthparts and with similar antennae, but not on the same model. Thanks to Entomologist Dan for pointing the BugLady in the right direction.

Turns out that it’s a fly (order Diptera) in the Biting Midge family Ceratopogonidae. BugFans from coast-to-coast who spend time outdoors in biting midge country (where “extra-fine” screens and netting called “biting midge screening” are required to keep them out of houses and tents) may know them as no-see-ums, midgies, punkies, moose flies, pinyon gnats and a few more colorful names. They are closely related (no surprise) to black flies, of previous BOTW fame. The BugLady is going out on her well-worn taxonomic limb and guessing that the flies she photographed are male Forcipomyia brevipennis (no common name). Here’s a better picture of a male, and here’s a female.

For the etymologists among us, Ceratopogonidae comes from the Greek “keratos” (horn) and “pogon” (beard)—bugguide.net speculates that this may be a reference to the male’s hairy antennae.

It’s a big family, with 600-plus species in North America and 6,000 worldwide. Like mosquitoes, the females of many species may eat plant nectar, but they need the protein from a blood meal to produce viable eggs (adults are described as grayish in color, except when engorged with blood). Ceratopogonids that don’t bite humans and other large mammals (and most don’t) may get their protein boost from other insects (one species sucks blood from the wing veins of butterflies) or from reptiles, amphibians, and birds—the hosts’ carbon dioxide trail helps the midges find them. Some are generalist/opportunistic feeders, but others target specific types of hosts. The biters may be abroad in large numbers (the word “swarm” is commonly used), and the bite-ee’s are left with irritating/burning punctures and reddish welts.

Our domestic biting gnats are also related to some groups like sand flies (sub-family Phlebotominae!!), which, besides being annoying, spread some pretty nasty diseases in tropical countries. Biting gnats in the US do transmit Blue tongue virus to livestock in the West.

Males eat only nectar/sugars, which suggests that the individuals that landed on the moth and katydid were just passing through. Biting midges are considered important pollinators of some tropical commercial crops, including mangoes, avocadoes, cocoa, and rubber, and they also pollinate elderberries. Most biting midge larvae are carnivores, but others are omnivores or detritivores, and some eat bacteria, algae, and fungi. The adults tend to live around water but are also found in higher and dryer habitats like mountains and scrubland.

Biting midges lay their eggs in damp-to-wet spots like moist soil, mud, rotting vegetation, compost, tree holes, and in wetlands. Development is speedy, and there may be several generations over a year, with the final stage overwintering as larvae and becoming adults in spring. The almost-invisible-to-the-naked-eye larva pictured here was found while the BugLady was photographing ephemeral pond critters and is not the same species as the adults pictured. 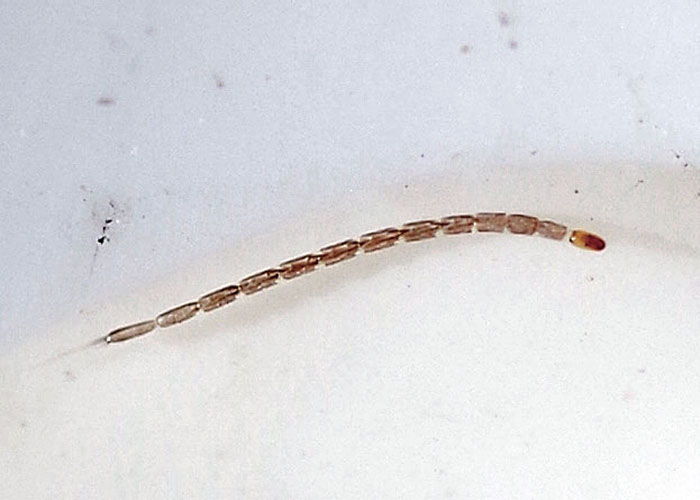 With 60 species here and 1,125 worldwide, Forcipomyia is the biggest genus in the family. The range of Forcipomyia brevipennis (“brevi” means short, and “pennis” means wing or feather) is described as “Holarctic,” which means that it can be found around the globe, north of about 22 degrees north latitude. The BugLady found articles about it from Russia, Spain, the Netherlands, Norway, England, and Honduras. It is described in bugguide as “a dark species with dark hairs;” males have long hairs on their antennae and females have short ones.

Forcipomyia larvae are terrestrial—eggs are laid in damp moss, rotting bark and logs, and even in anthills; Forcipomyia brevipennis eggs are generally found in manure, including under cow pies, and the larvae develop there.

Forcipomyia larvae have an interesting superpower. These terrestrial larvae take in oxygen through their skin by diffusion instead of through spiracles like many land-loving insects. The larvae live in pretty humid spaces—close to 100% saturated. They have two rows of setae/bristles along the dorsal surface of the body, and these setae have a secretory function. The substance they produce is sticky and hygroscopic (moisture-loving). It drips down over the top and sides of the body and forms a film that keeps the cuticle damp, which allows respiration to happen. It has been suggested that the fluid may also be both an anti-bacterial and an ant repellent.

In an article called “Morphology and histology of secretory setae in terrestrial larvae of biting midges of the genus Forcipomyia (Diptera: Ceratopogonidae),” researchers Urbanek, Richert, Gilka, and Szadziewski suggest that because Forcipomyia larvae are often found living in groups, there may be a shared effect of having all those sticky little bodies in one spot (though they may not have phrased it exactly that way). They report that:

“This [gregarious] behavior also facilitates the spread of the hygroscopic secretion from one larva onto another and these [sic] substrate when the larvae crawl in their microhabitats of small cavities under the tree bark or in the debris. The air-dried secretion forms net-like strands, which also collect water from the atmosphere. This way, the insects maintain a high humidity in their microhabitats. In addition, the pupae keep the larval skin (exuviae) on the abdominal segments, which prevents dehydration, while the larval cuticle and secretory setae covered by the secretion still absorb water from the atmosphere.”

All of which begs the Metaphysical question—How many biting gnats can dance on the head of a gypsy moth?