The BugLady takes lots of pictures as she moseys around—flowers, landscapes, a surprising number of people, and, of course, all manner of bugs. She recognizes some of the bugs she sees, and with a bit of judicious picture—keying she can discover the identities of many others (always remember—“What is it?” is only the first question to ask). Bug pictures may stall in the BugLady’s X–Files, awaiting identification—some for a long time. Here is a selection from the X–Files. In some cases the BugLady knows part of the story; in others, even less.

When she researched the life styles of lady beetles, the BugLady read that although a larval ladybug attaches to a leaf or twig by the tip of its abdomen when it’s about to pupate, it flips over within its pupal skin during pupation and is head-down when it emerges. Is that what happened here? An unsuccessful transmogrification? Or was it something more sinister? The path from egg to adult is a perilous one, and few actually make it.

Speaking of not making it, something crawled out through the top of this Withered Caterpillar Skin, but the question is—What? In restaurants, when she was a kid, the BugLady used to push the paper wrapper of the drinking straw down carefully from top to tip, forming an accordion-pleated tube. It writhed when a few drops of water were dripped onto it. Her Mother taught her how to do this. This caterpillar reminds her of the straw wrapper. The BugLady is guessing that whatever exited from this skin was not a hungry, newly molted caterpillar. 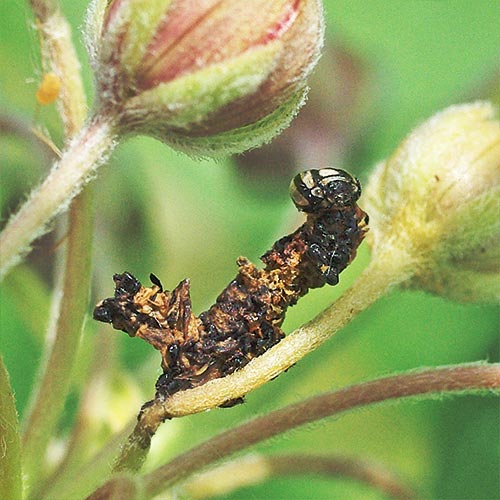 Bee In The Daisy

The Bee In The Daisy looks like it’s in one of those Fun Fair Jails that people throw their buddies into and release may be purchased with a ticket. She did not spy the predator/web—maker. 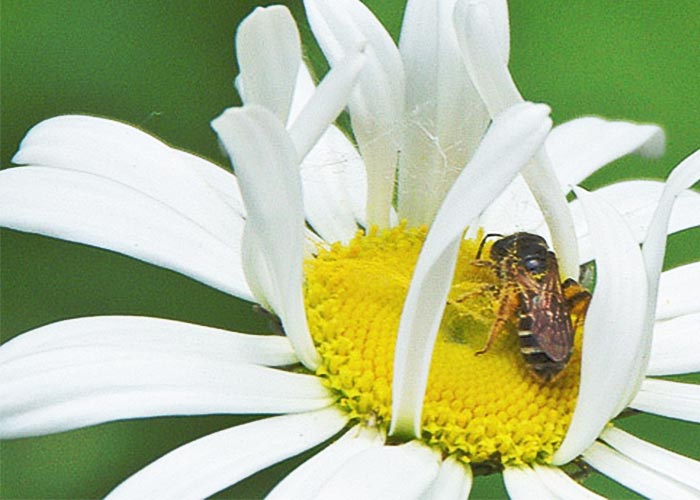 The BugLady holds to the credo that no insects will be harmed in the making of this series. None-the-less, there are always bugs that she realizes, as she is editing their pictures, she should have given a small poke so she could see what the rest of them looked like. She believes that this is a species of Bolas Spider (abdomen to the northeast; head and legs to the southwest) but would like to have demonstrated some legs.

What a cool bunch of spiders! They are bird-poop mimics. They get their name from the female’s preferred hunting method — using her forelegs, she swings at her potential prey a strand of web tipped with a ball of gooey adhesive. Not only that, but female Mastophora hutchinsoni (which this may well be) produces pheromones that mimic two species of female moth and so lure male moths for the spiders’ dining pleasure. It’s called aggressive mimicry. Some sources say the immature Bolas spiders are ambush hunters, but others say they attract various species of moth flies. Not only that, but a species of Bolas spider described in 1984 was named Mastophora dizzydeani (Baseball/BugFan Carl reminds us that the great pitcher, Dizzy Dean, never admitted to doctoring the ball). 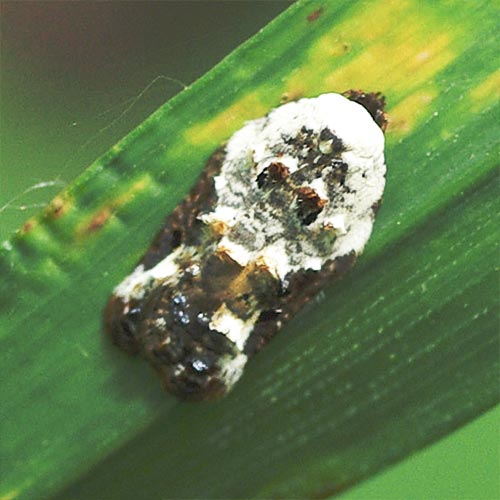 But then, it could be a moth…

The Monkey Slug bugged the BugLady subliminally for a long time, because she knew she had seen its picture somewhere (and it bears a resemblance to earth star fungi). As usual, she found it while looking for something else. A chunky brown moth called the Hag Moth (Phobetron pithecium) has a 12-armed larva that’s called the Monkey slug (according to the Nas New Testament Greek Lexicon, Phobetron means that which strikes terror, (cause of fright). Caterpillars shed five or six times between egg and pupa, and this is a shed skin. 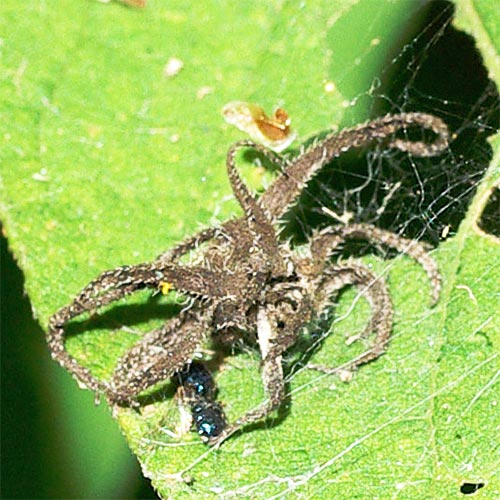 Adult female Hag Moths are said to be bee mimics, and tufts of pale hair on the female’s legs are supposed to look like a load of pollen.

Caterpillars in this family (Limacodidae) are called slug caterpillars and are known for their (sometimes very painful) stinging hairs. The Monkey Slug caterpillar’s reputation is for minimally irritating hairs (some people react more than others). According to Wagner in Caterpillars of Eastern North America, their shed skin mimics a tarantula skin.

Dead on the Road

DOR (Dead on the Road) was on the BugLady’s windshield one day, or, at least, part of it was (windshields make interesting and even surrealistic backgrounds to photograph insects on – the BugLady took a glamour shot of a deer fly, sitting on the windshield). She thinks this might be an ichneumon wasp. It has an interesting face, and not many wing veins. 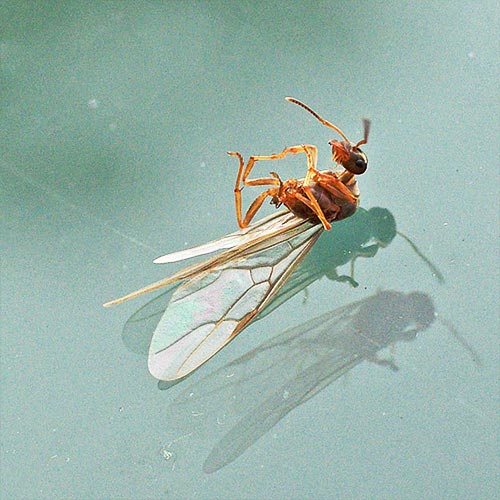 Consider this a Crowd-sourcing exercise. If any BugFans have more intelligent guesses, please send them to the BugLady and she will share your answers.

A Tale of Two Planarians