Even though she’s never exactly sure which species she’s looking at, the BugLady is always tickled when she finds one of these pointy little bugs. Here’s what you need to know about the improbable-looking Buffalo Treehopper – that it can fly and hop as well as walk, and that in Germany it’s called the “Büffelzikade” (“buffalo cicada”). The rest is lagniappe. 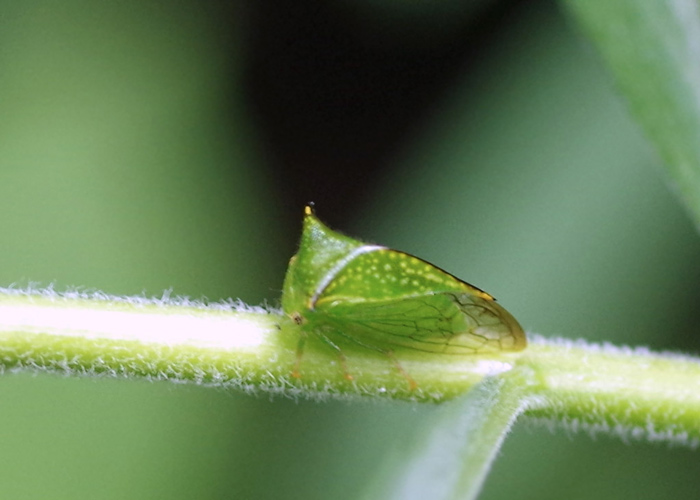 We’ll get the taxonomic confusion out of the way first: Buffalo treehoppers are in the treehopper family Membracidae and in the much-worked-over genus Ceresa/Stictocephala. A bugguide.net expert contrasts the current species placement in their guide pages with “the [former] fragmented classification, whereby our Ceresas got scattered among as many as four genera (Hadrophallus, Spissistilus, Stictocephala, Tortistilus).” Ceresa and Stictocephala seem to be synonymous in many species; and number of species have gone through several complete name changes – Ceresa alta is also known as Stictocephala alta and in the past has been called S. bisona, S. bizonia, S. bubalus, and C. bubalus. The BugLady has (maybe) pictures of Stictocephala/Ceresa alta and Stictocephala/Ceresa taurina here, but as biologist William Keeton once said, man is the only species that worries about the fine points of classification; the rest of the organisms know who they are. 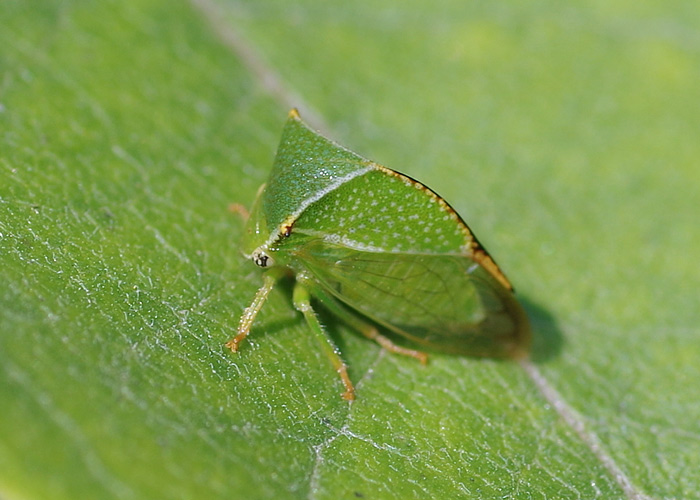 Adult treehoppers have an enlarged area behind their head that looks like a shield over the head, thorax, and first part of their abdomen. The design of this area can get pretty fancy, while another species with a far simpler blueprint, known as the Thorn treehopper, is known to inflict harm on people who walk on it barefoot. Some species of treehoppers are colorful and gregarious and are protected by ants in exchange for the honeydew they excrete; others, like buffalo treehoppers, are solitary and well-camouflaged. 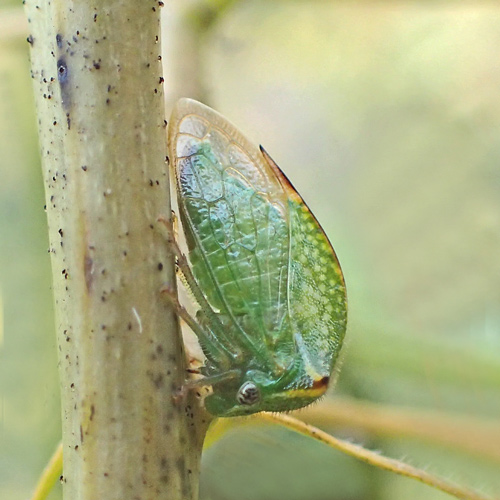 Treehoppers have been around for a very long time – fossil treehoppers found in amber have been dated to 40 million years old.

Buffalo treehoppers measure less than a half-inch long and are humpbacked and variously horned, supposedly reminiscent of their much larger namesakes (here’s a glamour shot of one species).. And their excellent, spiny nymphs look like mini-dragons. Buffalo treehoppers are mostly a New World, tropical bunch, and they’re widespread across North America, but a few species have stowed away and spread to parts of Europe, North Africa, and Asia, where they are unappreciated. 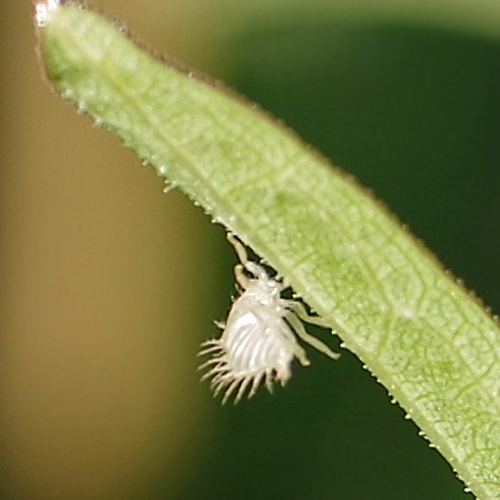 In their adult and immature stages, buffalo treehoppers feed on plant sap that they get by puncturing the stems of woody and non-woody plants with their strong “beaks” (and they can do minor damage to both in the process). They may begin their lives on woody plants, where Mom uses her sharp ovipositor to make shallow slits in twigs and to deposit her eggs. When the eggs hatch, the nymphs find their way to more succulent, herbaceous vegetation (Ceresa taurina moves from apple to aster, and Ceresa alta, from elm and apple to sweet clover). They molt five times on the way to adulthood.

In summer, when love is in the air, males attract females by emitting a sound that is inaudible to the human ear due both to its volume and to its frequency. 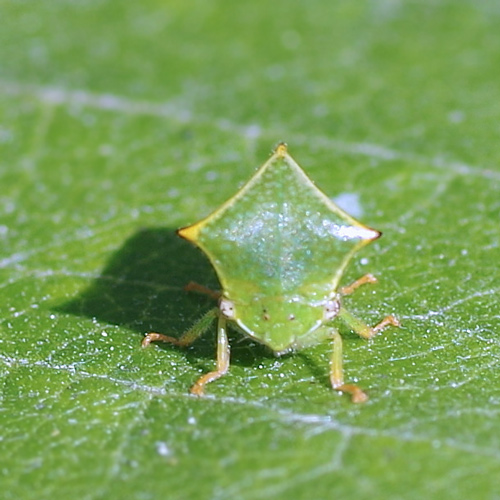 Writing in the “Thirtieth Annual Report of the College of Agriculture and Life Sciences at Cornell University and the Agricultural Experiment Station” (1917), W.D. Funkhauser tells us that “Eggs are laid in the bark of stems two or three years old. Egg slits are peculiar, being curved and parallel and so close together that the wound between them does not heal and thus considerable injury may be done to the twig. … six or eight eggs are laid in the slit. The eggs winter over and hatch in May.”

The slits can cause twigs to look rough and scaly, and multiple slits can weaken them; Funkhauser tells us that “Not only are the egg slits large enough to cause material mechanical damage, but the puncture allows the easy ingress of fungi and of other insects.” Buffalo treehoppers are also suspected vectors of some plant viruses. 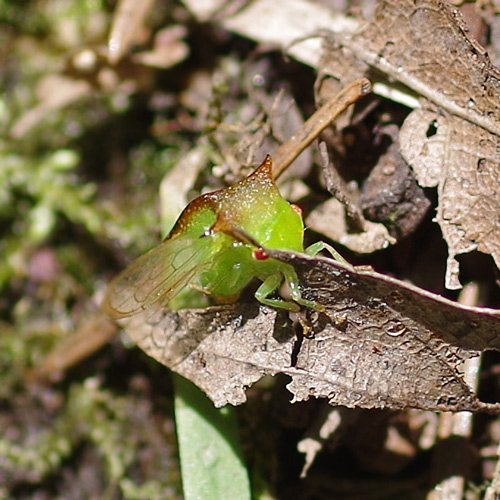 They don’t have a lot of enemies – the eggs are parasitized by a few small wasps. The BugLady’s picture of a Buffalo treehopper on some leaves was taken when she startled a damselfly that had grabbed the treehopper, wrestled it to the ground, and then ended up dropping it (for which the BugLady apologized) (but she couldn’t quite picture how a damselfly would approach the treehopper’s hard and slippery exterior.).

Treehoppers were featured a few years ago in a BOTW about Two-marked treehoppers (with a bonus picture of a buffalo treehopper).