The Buckeye (Precis coenia) belongs to the order Lepidoptera (scaled wings) which includes the butterflies and the moths. Of the 12,000 species of Lepidoptera in North America north of Mexico, only about 700 are butterflies. In common, along with the usual six-legs-three-body-parts insect stuff, moths and butterflies have four wings that are covered with easily-rubbed-off scales (the upper surface of a butterfly’s wing often has a different pattern then the lower surface does), and mouthparts in the form of a coiled tube called a proboscis that is used for feeding on liquids like nectar and sap. They do Complete Metamorphosis, moving from egg to larva (caterpillar) to pupa (in a chrysalis or cocoon) to adult. Caterpillars chew; butterflies and moths sip.

General rules for telling them apart are that butterflies sit with their wings held out to the side or folded vertically above their bodies, and moths hold their wings flat over or wrapped around their body. Butterflies have a thickened tip/knob on the end of their antennae; moths’ antennae may be bare or feathery, but are never knobbed. Butterflies are active by day (the BugLady has some night-feeding Northern Pearly-eyes who haven’t read that part of the rulebook); moths are generally active in late afternoon and through the night. Some day-flying moths have bright colors, but as a group, moths tend to be drab. Because of their pigmented and/or prismatic scales, many butterflies are the definition of the word “dazzling.”

Buckeyes belong in the “Brush-footed butterfly” family, a large group of strong fliers whose front legs are noticeably hairy and are reduced in size (leading to a nickname—“four-footed butterflies”). There are a number of brush-foots that migrate and others that, contrary to the usual insect policy, overwinter as adults. Many of their caterpillars are nocturnal and spiny. 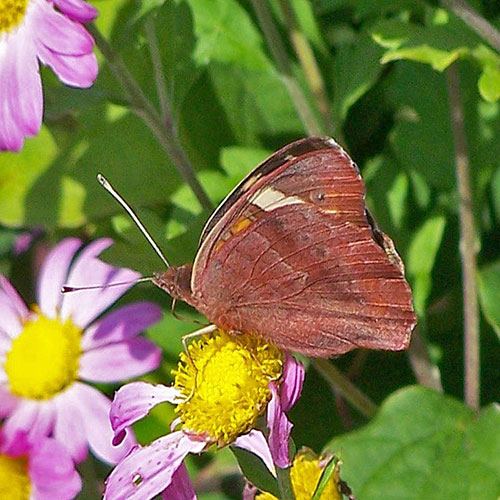 Buckeye caterpillars browse on plantains and snapdragons, and they are not very “freeze-tolerant,” so this species is more common south of Wisconsin. There are at least two generations of Buckeyes each summer, a generation born south of here that wanders north to re-colonize its summer range here in God’s country, and the offspring of that bunch, who migrate south in the fall (a third brood may be produced if fall is long and mild). The BugLady usually sees buckeyes after mid-summer and throughout the fall. Brock and Kaufman, in their Field Guide to Butterflies of North America, report that fall migrations of Buckeyes, especially on the Atlantic coast, can be spectacular. 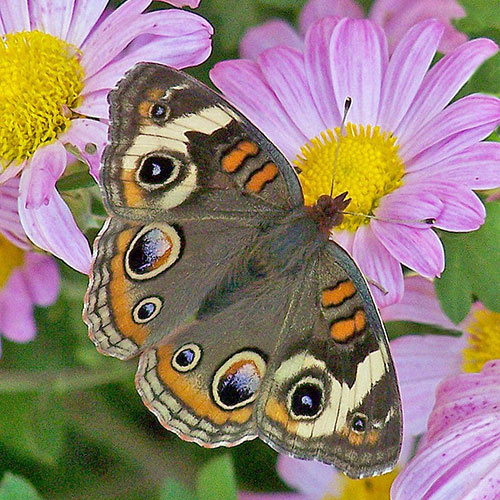 Buckeyes are sun-lovers, butterflies of the open fields, where they sip nectar from those confusing fall composites. The BugLady stalks through her fields, camera in hand and eyes peeled, but they always see her before she sees them, and fly up and away from their perch down in the grass. Males are feisty, chasing other flying objects, both butterfly and non-butterfly alike, out of their territories. The BugLady is married to an Ohio native who says that the eyespots on the top of a Buckeye’s hind wing are reminiscent of the eyespots on the fruits of the Ohio buckeye tree. Many members of the genus Junonia have eyespots to scare away predators, and an eyespot can even be seen in the Buckeye’s pupal wing case. There are no butterflies in Wisconsin that can be mistaken for buckeyes.