One of the last bugs to grace the BugLady’s porch light in autumn is the brown lacewing (she sees its jewel-like cousin, the green lacewing, in mid-to-late summer). Because of this year’s long, mild fall, brown lacewings straggled on into early November.

Brown lacewings belong to the order Neuroptera (“nerve-winged”). The order seems to be under constant review by taxonomists, and its inhabitants have been shuffled and re-dealt into suborders under the superorder Neuropterida, which embraces lacewings as well as oddballs like mantidflies (yes, these occur in Wisconsin), spongillaflies (so do these), antlions (and these), and owlflies. Snakeflies and the more familiar alderflies, fishflies, and dobsonflies (hellgrammites) have been dealt out and given their own orders but are sometimes included in discussions about the Neuropterida. Neuropterans are generally soft-bodied, weak-flying insects (they’ve been likened to drab, awkward damselflies) that are active in the dusk/dark and that have complete metamorphosis (egg-larva-pupa-adult). Brown lacewings are in the family Hemerobiidae, with about 500 species worldwide, 60 in the U.S.

Adult brown lacewings have four-wings and are a half-inch-long(ish), with light brown wings, often patterned, and they are less conspicuous—and hairier—than green lacewings (family Chrysopidae). They have chewing mouthparts and conspicuous eyes, and they somewhat resemble caddisflies. Despite what some books say, the stiletto-shaped larvae of brown lacewings do not (cannot, because they lack dorsal setae and tubercles to stick things to), disguise themselves by fastening the dry shells of their prey to their backs (green lacewing larvae do and are sometimes called “trash bugs” for their troubles). Larvae use their long abdomen as an aid in climbing, and they have pincer-like mouthparts designed for piercing their prey and then sucking out the juices.

Brown lacewing adults and larvae richly deserve their nicknames of “aphid lions” and “aphid wolves,” but they also prey on small critters like mealybugs, white flies, spider mites, scales, and on insect eggs (including those of their confreres). Despite their good camouflage, brown lacewings are eaten by birds, ladybugs (fellow aphid-eaters), dragonflies, and spiders.

Because their list of food items includes some agricultural pests, and because the adults are relatively long-lived (several months) and the females relatively fecund, they have been deployed to act as biological controls (you can buy them). In a 1923 “biography” of a brown lacewing named Micromus posticus (much of the brown lacewing literature is pretty dusty), Ohio Agricultural Station researcher Clifford R. Cutright noted that a brown lacewing may eat 41 aphids during its larval stage and an adult female may lay more than 450 eggs.

According to “The Life Histories and Stages of Some Hemerobiids and Allied Species (Neuroptera)” by Roger Smith, in the Annals of the Entomological Society of America, 1923,

Green lacewing eggs are set like tiny knobs on the end of stiff stalks, but brown lacewing eggs are laid directly on leaf surfaces, buds, bark, etc. near aphid populations. The larvae are active and fleet of foot in the first instar but may become more sedentary in the second two instars. One reference said that larvae whip their heads from side to side, a behavior that the BugLady saw in a larva that ran through a herd of aphids, brandishing one of their fallen comrades. They often hunt on milkweed leaves, but they prefer aphids that feed on plant juices from milkweed species whose cardenolide (toxin) levels are low. Mature larvae spin loose, double-walled cocoons in sheltered areas; there may be several generations per year, and the final brood may overwinter as a larva or a pupa (or as an adult in Southern climes). 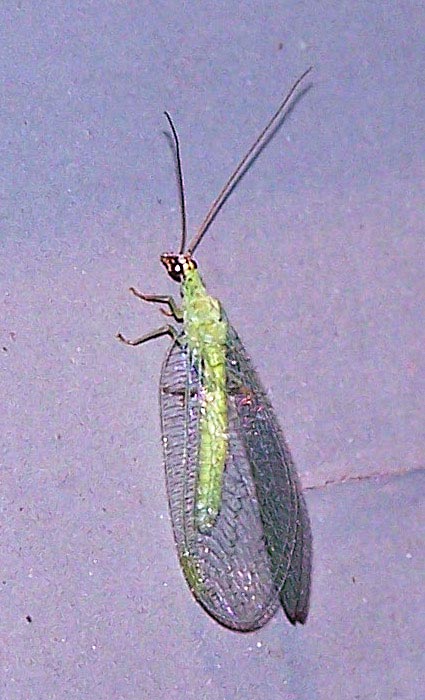 The BugLady thinks that a few of her lacewings with streaky wings might be Micromus posticus, a species that’s found across North America but seems more common in the Great Lakes area. This species was featured in an article suggesting that an increasing number of sightings of the species in Quebec could be part of a northern migration made possible by global climate change. The authors pointed out that the status of fall-occurring species can be hard to determine because systematic insect collecting drops off after September.