As butterflies go, the Bronze copper has a pretty standard biography, but we have other issues to tackle here and so will do a little multi-tasking.

Bronze coppers have gone through a number of scientific names—Hylloycaena hyllus, Lycaena thoe, and Chrysophanus thoe—before settling on Lycaena hyllus. They are in the family Lycaenidae, the Gossamer-winged butterflies, along with the Blues and Hairstreaks. BCs can be found in low, moist areas on both sides of the border from Maine west to the northern Great Plains and south to mid-country. Here in Wisconsin, they are rarer “up north.” One source suggested that the BC, like other coppers, favors areas where drainage is poor. 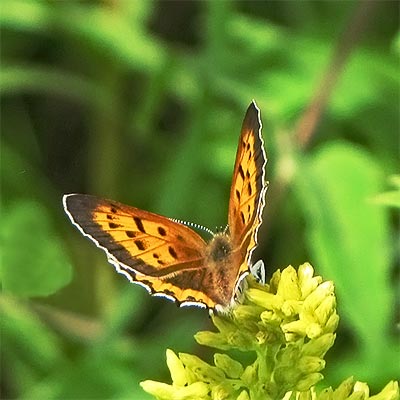 Adult BCs, especially females, take some nectar. Caterpillars dine only on a few species of the dock (Rumex), especially water dock, and smartweed (Polygonum) in the smartweed family.

BCs are dizzyingly similar to the American copper in their markings but with 1 ½” wingspreads are quite a bit larger than ACs. They are sexually dimorphic—the top surfaces of the male’s wings are dark and plain and the females are orange and black patterned.

Males scout for females from low perches. They are not enthusiastic flyers. The eggs are laid on the underside of the largest leaves of the host plant, and there are probably two broods each summer, the first brood more numerous. The second brood overwinters in egg form (eggs laid on large leaves at the base of the plant are sheltered in winter) and emerges in spring to feed. Adults die soon after producing the next generation.

According to accounts from several eastern states, BCs are now listed as threatened-endangered-of special concern-rare-absent in many parts of their original range due to draining and filling of their dampland habitats, urbanization, pesticides, and other realities of 21st century life. This, despite the abundance of the sun-loving curly dock along road edges.

And, then there’s this sexual dimorphism thing. What’s that all about, anyway—and by “What” of course, we mean “Why?” Why use the energy? What will it buy you? The term itself refers to genetically governed male-female differences in size, shape, color, behavior, vocalizations, etc. In many bird species, males have bright/exaggerated colors that they use in courtship and territorial defense displays (brighter coloration may be “encouraged” by females that fall for the gaudiest guys), while drab females are camouflaged for their child-rearing duties. Males are larger in some organisms (a male otter is twice the size of a female and therefore eats larger food items and doesn’t compete with her), but female birds of prey are larger, as are many insects and spiders. Egg-producing uses a lot of energy. In dance flies, of previous BOTW fame, the fringed legs of the female are thought to make her look like a wide-hipped fertility goddess. Males are more likely to present food to females that look receptive/fertile, and to further enhance their desirability, females may inflate air sacs located along the sides of their abdomen. It’s a huge and fascinating topic and is ultimately about who gets to pass along their genetic material. Meanwhile—Vive la difference!

Oh yes—butterflies have notoriously poor eyesight, so maybe sexual dimorphism keeps them from wasting their time on members of the same sex. Of course, many butterflies are not dramatically dimorphic.