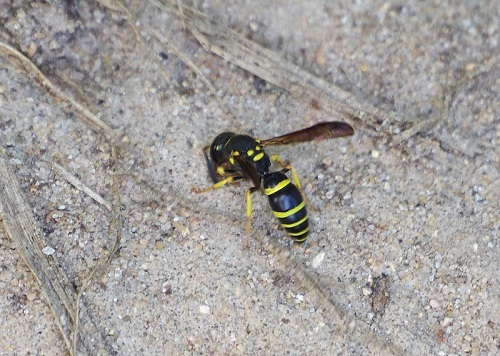 Who can resist a small wasp with a smiley face on its thorax, and a classy name, too? Certainly not the BugLady. When she found this camera shy wasp at Riveredge in early September, it appeared to be doing a little digging. It wasn’t tunneling; it was moving around, scratching a bit in several places. More about that in a sec. Here’s a glamour shot.

Bramble mason wasps (Ancistrocerus adiabatus) are in the family Vespidae (Yellowjackets, Hornets, Paper, Potter, Mason, and Pollen wasps) and are in the Potter and Mason wasp subfamily Eumeninae. Ancistrocerus means “hooked horn” and describes the shape of the last few segments of the males’ antennae.

Potter wasps fashion little clay jugs on plant stems for their eggs, and Mason wasps often employ mud on the interior of their egg chambers. There are about 3,000 species in the subfamily worldwide, and 260 in North America. They are solitary wasps that cache invertebrates for their larvae to eat when they hatch. BMWs are found across North America.

BMWs measure one-third of an inch or less (females are larger than males). Many have the smiley face, but some do not. Here are some nice pictures.

They nest in preexisting holes – hollow stems, rock crevices, old galls, used mud dauber wasp nests, and insect and man-made tunnels (the BugLady bought a package of bamboo garden stakes and left them on the porch. The ends of a half-dozen of them now have mud caps. She’ll be watching next year to see what emerges). The female starts at the end of the tunnel, where she lays a single egg that’s suspended from the ceiling by a thread. Then she hunts for (usually) small moth caterpillars and packs them into the chamber.

Before she lays the next egg, she makes a partition of mud (sometimes sand). Heather Holm writes in her book Wasps, that “Once a cell has been provisioned, the female gathers water and soil, mixes the two, and carries the clumps of mud in her mandibles back to the nest. Using the clumps of mud, she constructs partitions to separate each cell within the cavity and, when the nest is fully provisioned, to cap the end of the entrance with a mud plug.” The wasp that the BugLady saw was probably collecting bits of dirt to make into mud.

When the egg hatches, the larva will drop down onto its food supply.

BMW larvae pupate in their cells, and Holm tells us that “Gender emergence from the nest is protrandrous: Males emerge from a few to ten days prior to females. Like cavity-nesting bees, eumenine wasp cavities often have female offspring developing at the rear of the cavity and males situated closer to the front. Males emerge from the nest cavity first and often remain nearby waiting for females to emerge.” There can be several generations per summer, and the final generation probably overwinters in the cavity as pre-pupae.

Larger female BMWs lay more eggs and cache more caterpillars for each than smaller BMWs do. As a result, larger females will produce larger young. Adults feed on nectar.

While she was gathering information about the BMW, the BugLady came across a paper called “The first documented migration of a potter wasp, Ancistrocerus adiabatus (Hymenoptera: Vespidae: Eumeninae)” by Jeffrey H. Skevington and Matthias Buck about Skevington’s experience at Point Pelee (a peninsula that sticks down into Lake Erie from southwestern Ontario – and that is the destination of many a birding pilgrimage during migration) when he noticed a large number of BMWs moving along the peninsula. As they describe it, Skevington “noted an abundance of Ancistrocerus wasps (Hymenoptera: Vespidae: Eumeninae). Every goldenrod inflorescence contained dozens of these insects, mainly stationary, none moving farther than between flower heads on adjacent plants.”

Later, after a wind change, he “noticed Ancistrocerus wasps moving from east to west in large numbers, typical of the direction of movement of visibly migrating birds. The wasps were moving in a narrow band along the lakeshore, almost entirely between the agricultural fields and the lake over an 80-m wide swath of grasses, goldenrods, and other meadow plants. Their movement and flow were assessed over 69 min. For the first 50 min of observation, they moved steadily over the 80-m lakeshore buffer area.” He “estimated 880–1360 wasps were passing per min. Based on consistent passage observed for 50 min, that equals 44000–68000 wasps.” The next day, after the passage of a cold front, the show was over. Migration has not been noted in this species before.

The word “migration,” though, is a bit slippery, and the scientific community doesn’t seem to be in agreement about its definition. It’s often taken to mean a seasonal movement from one habitat to another, and it implies a return trip, either by the individuals that went south (or wherever) or by their offspring. Monarch butterflies are good examples of this definition – they move in a relatively straight line to a fixed destination (they’re not sidetracked by warm breezes and blooming flowers along the way), and the generation that migrates undergoes physiological and behavioral changes that ready them for the trip. Other scientists use it more inclusively, to refer to any deliberate movement that delivers the insect to a new habitat, like range expansions, or the dispersal of locusts when their population booms and food is scarce.

An article about insect migration by C. B. Williams offered two neat stories of insect migration. One is about a species of Australian moth that migrates from its breeding grounds in the lowlands to its wintering spot in caves in the mountains of New South Wales, settling in in Biblical numbers (1500 moths per square foot). Aborigines used to harvest the high-fat delicacies and eat them.

The other concerns a wasp in Africa: “In the Hymenoptera there is a remarkable case of something closely resembling migration in one of the burrowing wasp, Sphex aegyptiacus Lepeletier, which uses locusts as food for its young. In East Africa in 1939 the arrival of a swarm of Schistocerca gregaria was at once followed by the appearance of thousands of the Sphex, not one of which had been seen in the district in the whole of the preceding year. The wasps burrowed in the ground and caught, paralysed, and buried locusts from daybreak to sunset for two days. Then the locust swarm departed and within an hour not one Sphex was to be seen. ….. There is no doubt that this species has somehow developed a migratory habit in order to keep up with the wanderings of its prey. It seems probable that in such a case any orientation is only a question of imitating the locusts, and is not determined independently by the wasps.”