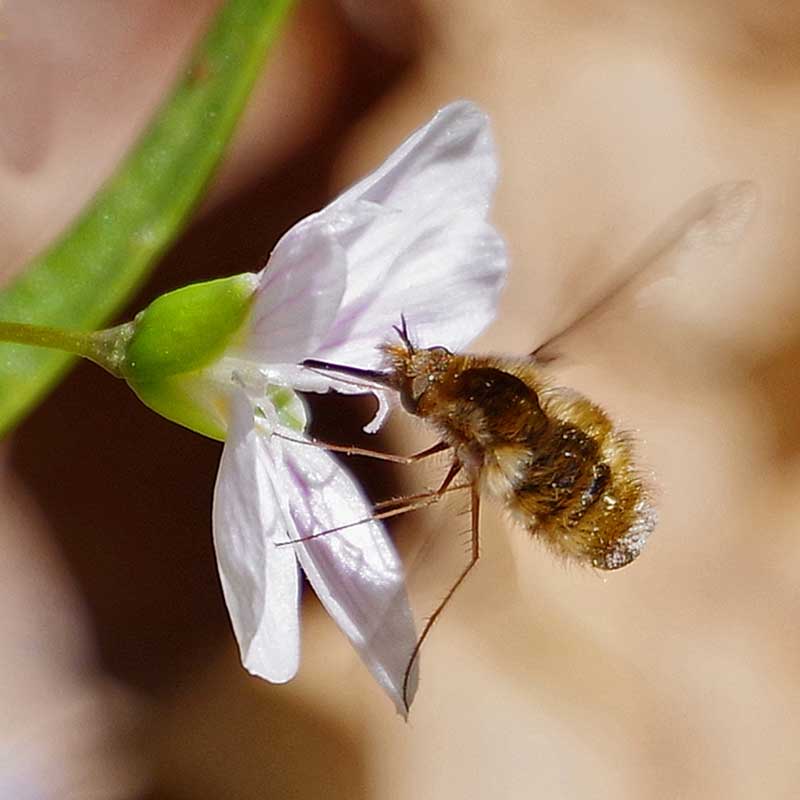 What a treat to come across one of these fuzzy little flies sipping nectar from a spring flower!

Bee flies are said to get their name from the fact that they are bee mimics that look and buzz like bees. (Note that bees have four wings and bee flies have two, which they splay out slightly when perched). The BugLady has heard the larger species, but not the smaller ones. And from the fact that the lives of their offspring are bizarrely intertwined with those of some native bees. Alternatively, Wikipedia lists the common name “humblefly.” 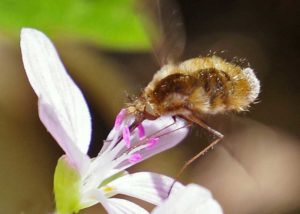 Bee flies are in the family Bombyliidae, and the BugLady thinks this one is in the genus Bombylius. There are 80 species in the genus in North America, and 300+ species worldwide. They can be found in spring and early summer in grasslands and woodlands across much of the globe (especially the northern half of it). Bee flies have appeared in these pages before.

They’re excellent flyers, fast and nimble, and they can hover, which causes people to mistake them for syrphid flies, and they’re pretty cute, too. Here’s why these bee flies are awesome: 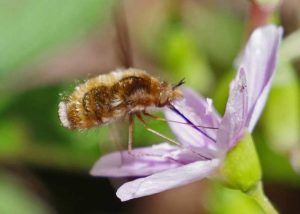 A terminology reminder… according to the classical definition (which has some loopholes), parasites live in/on their much larger hosts, imbibing nutrients from but not killing them. Parasitoids inhabit their hosts during certain life stages, and it is a zero-sum game. In general, the larval parasitoid boards the larval host and feeds on it, eating around the major organs in order to keep its food alive, and then killing it when the parasitoid is almost ready to pupate. The eventual adult is free-living. In the insect world, the larvae of various groups of wasps and flies account for most of the common parasitoids.

It is not a coincidence that Bombylius appears when the early mining, sweat, and cellophane bees (of recent BOTW fame) are active. The fact that they’re parasitoids isn’t unusual; it’s the delivery system that sets bee flies apart. Like their larger, later-season cousins, female Bombylius bee flies search for the excavations of these early bees and may even follow them home from flowers. When the tunnel’s excavator is off collecting pollen and nectar for her eggs, the bee fly hovers over the nest hole and lobs an egg down toward the tunnel. (Bee flies especially like to find a group of nest openings on a slope or embankment—the angle of the shot is better).  After the egg lands, it’s up to the larva to find its own food.

And the larva is uniquely equipped to do that, because bee flies practice hypermetamorphosis. In most insects, the larval stage is not an active one—it’s dedicated to eating and storing energy that will allow the insect to metamorphose successfully. Some larvae barely have legs. Like the larvae of a very few other groups, bee fly larvae are super active right out of the box, in their first instar (in this stage, the bee fly larva is called a planidium). This allows them to trek down the tunnel and find an egg chamber.

After the host female closes up the chamber, the bee fly larva starts in on the bee larva’s cache, possibly even sharing it with the cache’s rightful owner initially. Then it molts into a more typical, less-active second instar, and then it eats the bee larva. One source said that the bee fly maggot may even invade other egg chambers along the tunnel. The bee fly pupates in the egg chamber and emerges the following spring.

When the BugLady photographed her bee fly, she noticed that the rear of the abdomen was pale, and she wondered if that might be a field mark that would help her to identify the species. Turns out that the story was way better than that! Bee flies are small, and their eggs are light, and if the egg were heavier, it would sure help the female’s accuracy and the egg’s trajectory. She collects sand or dust on the hairs at the end of her abdomen, and some of it is taken into a tiny sac at the abdomen’s tip. Eggs that are about to be laid pass this supply of grit and some of it adheres, making the egg heavier (according to some scientific guesses) and more camouflaged (according to other scientific guesses).

Some Cool Things about Bombylius:

Although they usually fly close to the ground (it’s warmer down there), sometimes they fly up to the treetops to heat up, and they spend the night there. When it’s cool and cloudy, they may sit on the ground. According to one researcher, a chilly bee fly might perch with its abdomen pointed upwards for days. Like other fuzzy, early spring insects, they quiver their wing muscles to warm their thorax.

Hovering above a flower and deploying their long proboscis allows them to feed without alerting predators that hide in the blossoms.

That proboscis allows them to probe tubular flowers for nectar (they favor purple, blue, violet and white flowers). Although they barely touch the flowers, pollen does collect on their hair, and along with mining bees, they are considered to be important and underrated pollinators.

A final scenic side trip… when the BugLady read that bee flies hover above flowers and still collect pollen, she thought of “buzz pollination,” in which a visiting bee grabs a flower part and vibrates its wing muscles, shaking the pollen loose. Bumble bees and several other kinds of native bees are buzz pollinators. Buzz pollinators are far more effective than honeybees at pollinating plants with bell-shaped flowers, like tomatoes, eggplants, and blueberries.

But the other half of the buzz pollination equation is that the falling pollen sticks to the bees because pollen has a slight negative electrical charge, and the bumblebee has a slight positive charge that is generated by the friction that the bee encounters as it’s moving through the air. We’ve known for a long time that bumblebees generate this charge as they fly and that the charge attracts pollen from upright flowers, too. Other flying insects develop similar charges, and it’s possible that hummingbirds and flower-feeding bats do, too. The BugLady suspects that bee flies take advantage of this trick of physics. Stay tuned.

It gets better—a flower’s electrostatic charge changes after a pollinator visits it, at least for a while. Bumblebees can sense the charge on a flower as they approach. Their hairs stand on end and signal their nervous systems if the flower’s charge is negative, and they don’t waste time on a flower that’s been raided recently by another bee.

And then it gets even better. The Cross orbweavers (and other spiders) spin trap webs whose glue is negatively charged. When an insect with a positive charge flies past, the web is ever-so-slightly attracted to it, and the threads rearrange themselves just a little bit in the direction of the flying insect.