Every year, the BugLady prowls her favorite wetland, looking for Bog Coppers for the Riveredge Nature Center July Fourth Butterfly Count (an annual NABA—North American Butterfly Association—event). Butterfly counts are a phenology-driven snapshot of what’s around—“snapshot” because a species that’s nearly absent on the count day may have been present just prior to the Count or might emerge two days later in abundance. Weather can play a large role in phenology (Nature’s calendar)—very wet or cool springs delay caterpillars; early springs mean early butterflies—and climate change is causing shifts in timing for some species. Anyway, it’s been years since she found one of these uncommon butterflies.

Bog Coppers (Lycaena epixanthe), also called Cranberry-bog Coppers, are with hairstreaks, coppers, and blues in the Gossamer-wing family Lycaenidae. With wingspreads of slightly less than an inch, they are the smallest coppers. They occur in a band across North America on either side of the Canadian border, as far south as northern Ohio/Pennsylvania/New Jersey, and Maryland, and never far from cranberry plants. They are extreme food specialists (the caterpillars eat only cranberry leaves) that are considered rare overall (and declining in the western portion of their range), but they may be locally common. BCs are weak, erratic flyers that don’t disperse widely, so a whole population may spend their collective lives in only a single area of a single bog. If a population becomes extinct, it may be a long time before a new one is established. According to The Butterflies of Massachusetts website, commercial cranberry bogs do not support BCs. The effects of pesticides, drastic habitat destruction or fragmentation on BC populations are easy to guess. 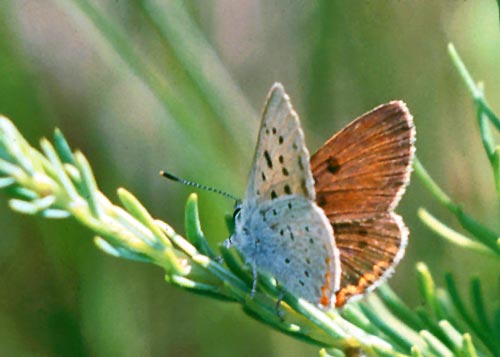 The life history of BCs was not thoroughly studies until the 1980’s. They are considered remnants of a larger population that existed before the most recent glaciers. Adults fly while cranberry plants are in bloom (cranberry flowers look like mini-versions of the shooting stars that bloom on the prairie), and males watch for females from low vegetation (they never gain much altitude). He woos her with wing vibrations; she accepts or rejects him using the same. The eggs are attached to the underside of cranberry leaves in mid-summer, and according to some reports, the eggs fall off the leaves in autumn. The larvae start to develop within the egg but then they aestivate for the winter—enter a state of suspended animation—and don’t hatch or feed until the following spring, eventually pupating in a chrysalis on the ground. BCs spend more than three-quarters of their lives as eggs, and those eggs can survive both water and ice.

The slug-shaped caterpillars of many Lycaenids are protected by ants in exchange for access to the sweet honeydew that they produce (one species of Lycaenid caterpillar is raised by ants because it imitates the sounds and smells made by the colony’s queen). Many Lycaenid pupae can make noise from within their chrysalis (the unrelated Monarch pupa makes clicking sounds, too). According to a paper written by John Downey and published in the Journal of the Lepidopterists Society in 1966, sound production in Lycaenid pupae was first reported in 1774, and the ability occurs in members of at least 40 families of Lepidoptera. A Lycaenid pupa may make noise by bumping against the inner walls of its pupal case, by rubbing bumps on its body against the inside of the pupal case, by friction from rubbing the 5th and 6th abdominal segments together, or rubbing the proboscis against the abdomen. Downey says that “the sounds produced by Lycaenid pupae have been described variously as ‘creaking,’ ‘chirping,’ ‘ticking,’ ‘humming,’ or ‘clicking’ noises.” Although many can make sound, no one has found any structure that allows them to hear sound, so they’re probably not communicating with each other. Because pupae make sounds when they are disturbed, scientists speculate that the sound is a defense mechanism (there must be some pretty surprised birds out there), but they wonder why the caterpillars, which are much more susceptible to predation than the pupae, are almost universally silent. The sounds may simply be accidental by-products of movements within the tight confines of the chrysalis as the pupa gets close to emerging. Coming full circle, the sounds made by pupae may also be related to their complicated relationships with ants. 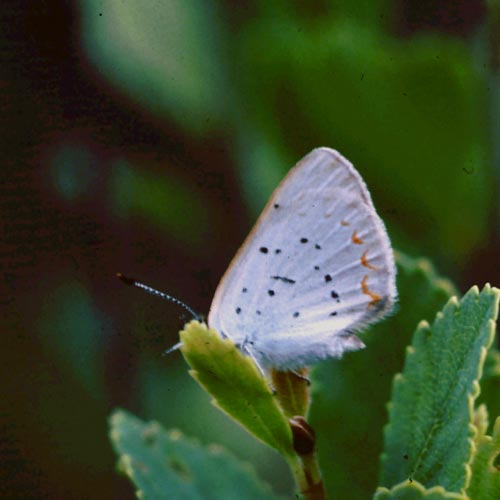 Adult BCs nectar on cranberries and on flowers in the aster family; they get liquid from dewdrops and from “mud-puddling.” BCs often bask in the sun early in the day, and they’re active from mid-morning until late afternoon.

There’s a lot of variation in color and degree of spotting between one BC population and the next (within a population, BCs may be pretty similar). Males are purplish and have more wing spots; females’ upper wings are more bronze. There are three races of BCs; the underwings of Eastern BCs are yellow, and our guys/gals have silvery underwings. When they sit with folded wings on a bog birch, they match the undersides of the birch leaves.

Butterflies in January? It’s never too early to start thinking about butterfly counts!