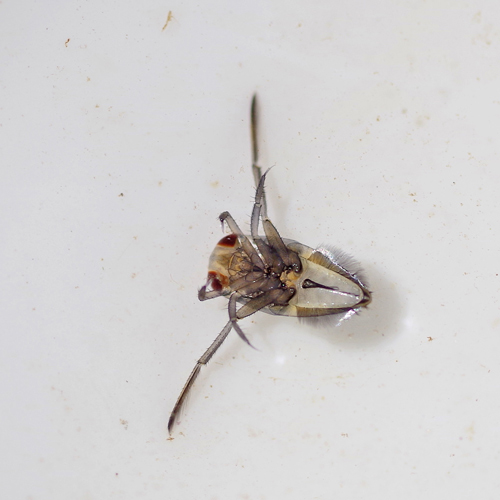 Life is busy, and besides, May is National Wetland Month, so here’s a rerun from ten years ago.  A few new words and pictures.

The BugLady will visit these guys together because even though they are, in a sense, photo-negatives of each other, they are often mistaken for one another (until you know the secret handshake). The majority of aquatic animals, from orcas to Mergansers to muskies to water boatmen tend to be dorsally dark and ventrally light (have dark backs and light bellies).  This coloring is protective because a predator looking down from above has to distinguish its dark-backed prey from the dark water surface, and a predator looking up from below sees a light belly against a surface that reflects the light of the sky.  The backswimmer, which spends its life rowing around belly-up, flip-flops the usual color scheme and has a dark belly and a light back.

These two aquatic, boat-shaped, less-than-a-half-inch-long, “True Bugs” (Order Hemiptera) are not in the same family, and the water boatman also departs from the usual mouthparts and diet of its compatriots, but they have many similarities.  They are found in still waters – preferably with aquatic plants – including ponds, lake edges, sewerage ponds, bird baths, and even swimming pools (lots of websites devoted to getting rid of water boatmen and backswimmers in swimming pools), and they are more active in the dark than in the light.  They locomote via rowing movements of their flattened third pair of legs (backswimmers) or second and third pair of legs (water boatmen) and are often seen swimming or grabbing plant stems in a head-down position. They are strong fliers, although the up-side-down backswimmer must climb out of the water and flip over onto its belly before it can spread its wings and take off.

Both bring a tank of oxygen with them as they swim underwater.  The backswimmer stores air in two hair-covered troughs on the ventral side of its abdomen (it can stay underwater for as long as six hours), and the water boatman wraps a bubble of air under its wings and around its abdomen and also picks up dissolved oxygen from the water (it is so buoyant that it must grab vegetation in order to keep from floating to the surface).  Both overwinter as adults, and some water boatmen may remain active under the ice. The males of both groups stridulate – rub rough area on their front legs against their head – “chirping” underwater to attract mates.


Backswimmers (family Notonectidae) are piercer-predators that kill and suck the bodily fluids out of any prey they can subdue – invertebrate and vertebrate alike – including tiny tadpoles and fish fry (but big fish eat backswimmers).  Each set of legs is used for a different function – the front pair for catching their prey, the middle pair for holding the prey tight, and the flattened, hairy third pair acts as oars.

These little “Davids” will sometimes go after Goliath, piercing the leg of a human swimmer or wader, a habit that has earned them the name of “water bee” or “water wasp.”  It is a painful, burning bite that can have lasting effects in those who may be “susceptible to poisons,” according to Anne Haven Morgan in the Field Book of Ponds and Streams.


The often red-eyed Water boatmen (Family Corixidae) are a bit smaller than backswimmers.  Collector-gatherers, they swim along the bottom of the pond, head down, in search of food, and they use their front pair of legs to scoop it up.  Lacking the standard piercing beak issued to other aquatic true bugs, they ingest living material – diatoms, algae, protozoa, nematodes, small insects – that they find when they stir up debris on the bottom of a body of water. Some suck juices from algae.

The eggs and the adults of water boatmen are eaten by birds and by humans (an Egyptian and a Mexican delicacy, according to some references) and were said to have been introduced to England as a food source. The Handy Bug Answer Book by Dr. Gilbert Waldbauer recounts how bundles of rushes that are put into ponds in Mexico as a substrate for water boatmen to lay their eggs upon are removed, dried, and beaten to loosen the eggs.  The eggs are then cleaned and ground into flour to make a cake called “hautle.”

Besides their surprising edibility and the fact that they are said to smell like bedbugs, the water boatman’s only other claim to fame is that the males of some species make ultrasonic mating calls with what Monty Python would call their “Naughty-bits.”  Do not try this at home.