In the absence of an official common name, the BugLady is calling this beetle, Epicauta atrata, the Red-headed Blister Beetle (with lower-case letters—rhbb—just in case). That it is a blister beetle (Family Meloidae) is clear from the soft, velvety-looking elytra (wing covers) that are shorter than the abdomen and seem to curl around it (blister beetles give the impression of being cylindrical), long legs, and a wide head with beaded or threadlike antennae. There are about 410 species of blister beetles in North America north of Mexico and about 4,000 worldwide, and various species have starred in these pages before. Eastern blister beetles are sedately (yet elegantly) colored, but in the Southwest, where the family is most diverse, there are some beauts:

Many blister beetles can be tough to ID to species from photos. In a discussion of the genus Epicautain bugguide.net, blister beetle expert John Pinto tells us that there’s no single correct angle to photograph your beetle from, because different species have different diagnostic field marks, and he concludes that “Many common Epicauta are simply difficult to identify from photographs—field photos are poor substitutes for having a specimen in hand…”  Even color may not help—the rhbb also comes in a soft gray with a red head, and in an all-black form that resembles several of its Epicauta cousins (blister beetle taxonomy is tricky, and because of the color phases, old records are suspect). 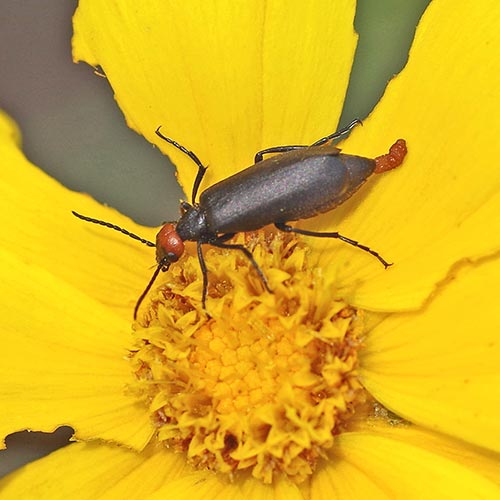 While most blister beetles have two claims to fame, the RHBB has three.

First, they have complete metamorphosis (egg-larva-pupa-adult), but because they develop by hypermetamorphosis, they’ve super-sized the larval stage. Most larvae are fairly low-key and even sluggish, but a blister beetle larva is, temporarily, long-legged and active. Why? Because blister beetle larvae are parasites, and the first stage larva (called a triungulin) must find its own way to its host (usually, the eggs of short-horned grasshoppers or solitary bees).

A bee-loving female blister beetle lays her eggs on a flower or leaf. The newly-hatched larva scrambles about, locates a visiting bee (triungulins of some blister beetles give off pheromones that attract bees to their flower), and hitchhikes back to the bee’s nest, where it takes over an egg chamber and feeds on the bee’s eggs, or on her larva, or on the food that she stored for her larva. Blister beetles that prey on grasshoppers lay their eggs on the ground, and their larvae seek out grasshopper egg masses. After they’ve found their host, triungulins molt into second stage larvae that look and act more grub-like.

Adult blister beetles are herbivores that feed on the pollen/nectar/vegetation of a large variety of plants, including many agricultural crops (in fall, they’re often found on members of the Composite/Aster family). Most sources that the BugLady looked at said, “Yes, they do feed on crops, but they’re generally not that destructive.” They have some natural enemies, including robber flies and ambush bugs.

Their second claim to fame is their defense strategy. Blister beetles are protected by a chemical called cantharidin, which is stored in their blood and which they can cause to ooze from their joints at will. It’s not random—Thomas Eisner, in Secret Lives, his book about chemical defenses, says that if you grab a blister beetle’s leg with a forceps, it will release a drop of cantharidin from that knee (reflex bleeding). Grab the body, and all six legs and the neck will bleed. The chemical causes gross, itchy blisters on tender skin (though the tougher skin of fingers may react less). Epicauta—from the Greek words epi (upon) and caut (burn).

Cantharidin is powerful stuff. According to Eisner, “taken orally, the substance induces severe, irreversible damage to the renal and reproductive systems, and is lethal (to both men and women) in very small quantities.” Despite that, it’s been used medicinally, with disastrous results; recreationally (it’s the main ingredient in Spanish Fly), ditto; and when blister beetles get caught up in hay bales, they may cause great distress to the livestock that inadvertently feed on them.

What’s sauce for the goose is sauce for the gander. Females don’t produce cantharidin, but males hand some over in their sperm packet, and both the females and their eggs are protected by it. In fact, cantharidin is such a good defense that other species cash in on it. Males of several genera of beetles climb onto blister beetles, lick off some cantharidin, and present it to their females, who cover their eggs with it.

And the third claim to fame? The rhbb doesn’t eat bee larvae or grasshopper eggs, it feeds on eggs of blister beetles in its own genus, for which it’s lumped in with the “Good guys.” Scientists who tried to feed grasshopper eggs (or pollen taken from bees) to rhbb larvae found that not only do they not identify grasshopper eggs as food, the grasshopper eggs were toxic to first stage larvae (but possibly more palatable to older larvae).

The rhbb’s full scientific designation is Epicauta atrata (Fabricius, 1775). Johan Christian Fabricius, the fifth in the “Who Were Those Guys?” sidebar series, laid down some important scientific building blocks at a time when the systematics of entomology was in its infancy—when the group called “Insecta” included spiders, crustaceans, molluscs, and more.

J.C. Fabricius, like the preceding four “Guys,” was in love with the natural world from an early age (Johan Christian is not to be confused with his contemporary—and distant relative – Otto/Otho Fabricius, who explored and catalogued the animals of Greenland in Fauna Groenlandica). He was born in 1745 in what is now the Schleswig-Holstein area of northern Germany, but what was then a part of Denmark. In 1762, he traveled to Sweden to study for two years with Carl Linnaeus, who was undertaking his vast overhaul of the unwieldy system of classification of living things, and whose works Fabricius had read as a boy.

Fabricius later worked at the University of Copenhagen, teaching and growing their collections, and then at the University of Kiel (which promised to build him a Natural History Museum and a Botanical Garden and to buy new equipment, but which never delivered). He wasn’t happy in either place and eventually spent long periods traveling and examining insect collections all over Europe. Three times he tried to resign from his job in Kiel, and three times he was persuaded to return by his students (once, even the king weighed in). In the course of his travels, he described almost 10,000 new species of insects, largely from the collections of the eminent natural historians of his time, though sometimes he inadvertently re-described and reclassified the same species he had seen in different collections—”In my youth this did not easily happen, my memory was better and my eye sharper; now both are weaker”.

Linnaeus, whose first love was plants, developed a system of insect classification based on the number of wings they had. Fabricius thought this an artificial characteristic and classified insects according to their mouthparts—”those whose nourishment and biology are the same, must then belong to the same genus.” Though he did not include it in his work, in 1804 he foresaw that the structure of male genitalia would someday be used in classification, and he believed that new species could arise from hybridization and from adaptation—“The enormous number and multiplicity of the species are due to an evolution of new species, partly as a result of hybridization among the species already existing, partly as a result of the facility of the external parts to attain new forms and thus to build up stable varieties which later evolve into species.”

Fabricius wrote many books about insects and classification in a period of 30 years, but his final manuscript was never published because its publisher went bankrupt and all the manuscripts were discarded as “waste paper.”

Although his terminology and divisions are no longer used (his Class and Order levels became our present Order and Family), he “invented” modern insect classification, and in 1778, he wrote Philosophia entomologica, the first real textbook of entomology. Fabricius has been called one of the most important of Denmark’s natural history scientists, “The Linnaeus of Insects,” and one of the founders of systematic entomology—”the number of species in entomology is almost infinite and if they are not brought in order entomology will always be in chaos”. He died in 1808; a biography can be found at http://www.annualreviews.org/doi/pdf/10.1146/annurev.en.12.010167.000245.

A final word from Fabricius—”generic names with more than twelve letters should always be avoided, since they are difficult to pronounce and awkward.”

This is, by the BugLady’s tally, BOTW #400. Sheer cussedness. Thanks, as always to BugFan Homer and his crew for their awesome job with the UWM Field Station archive (the BugLady numbers her collection a little differently than the archive). Yo—Patrick—who would have guessed!

The BugLady is not going to Disneyland, but she is celebrating by taking the rest of the month off—check out the archives. See you in March.

Bugs In The News