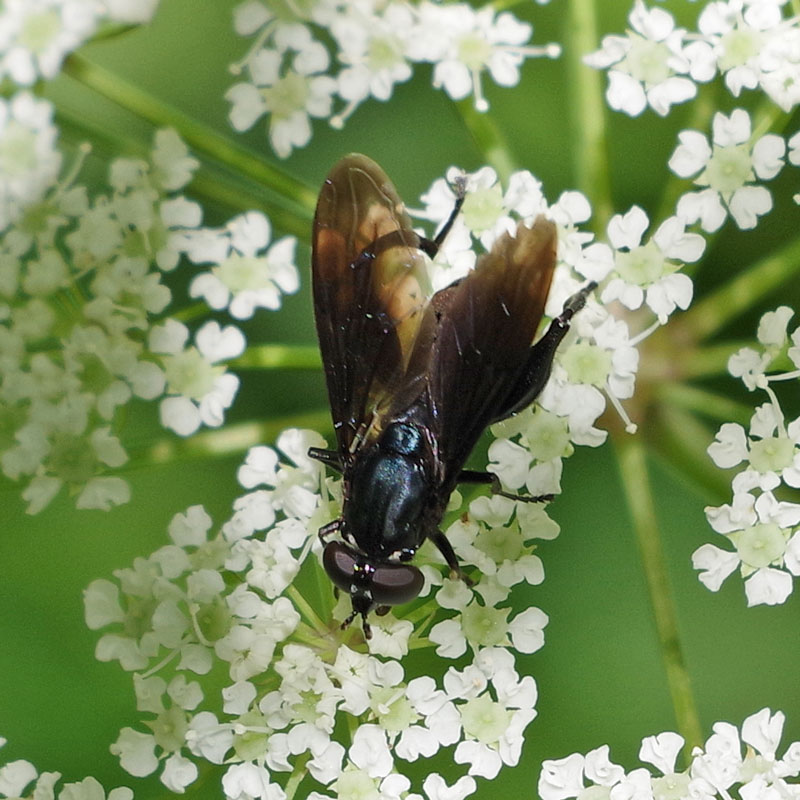 OK – the last of the Water Hemlock series (unless/until the BugLady discovers the ID of a really smashing ichneumon wasp that was also working the flowers).

The BugLady was stumped by this one.  It didn’t spend much time in her vicinity; when it first landed, she thought it might be a moth, then a wasp. When she got home and put it up on the screen, it looked like it had been put together by the proverbial committee. She looked into family called the Mydas flies (Mydidae), which have those “muscular” femurs, but the antennae were wrong, and she finally sent it to an real entomologist (thanks, BugFan PJ).

Syrphid/Hover/Flower flies are often (but not always) delicately-etched bee and wasp mimics that nectar at flowers. They come in a large variety of flavors, from svelte to chunky, and from smooth to hairy, and not all of them are yellow and black:

Short review because we haven’t for a long time. In the names of members of the fly order, Diptera, the word “fly” is separate. Flower fly, house fly, bee fly, etc. In other orders – dragonfly, mayfly, dobsonfly, stonefly, etc. – it’s part of a single word (a “closed compound word,” to grammarians). 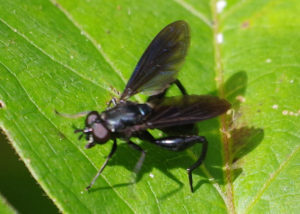 Anyway, Syrphidae is a large family with more than 6,000 species distributed globally (except Antarctica); 813 in North America. The adults are vegetarians, feeding on nectar and pollen, and the larvae (maggots) have an array of palates.  Some eat decaying organic material, plant or animal, in soil or in wetlands or rot holes (the breathing tube that protrudes from the rear of wetland species has given them the nickname “rat-tailed maggot”). Others live on plants and prey on small invertebrates, including aphids. Many are wasp mimics, both visually and sometimes aurally, and all are harmless.

The Black-winged/Violet leafwalker (Chalcosyrphus chalybeus) is a wasp mimic whose scientific name also seems to have been made up by a committee – Chalcosyrphus means “coppery-colored syrphid,” and “chalybeus” means “steel-colored.” Here are some shots of it that are better than the BugLady’s: https://bugguide.net/node/view/418900/bgimage and https://bugguide.net/node/view/958843/bgimage. Black-winged leafwalkers may not have a stinger, but female Common blue mud dauber wasps (Chalybion californicum) and Steel-blue cricket-hunter wasps (Chlorion aerarium) do. To seal the deal, the Leafwalker flicks its wings like the twitchy wasps. Batesian mimicry.

Genus members are usually found in wetlands, where their maggots are saproxylic, feeding on decaying wood or maybe on decaying sap within the decaying wood. Most sources said that the adults eat nectar (which is basically sugar-water) and pollen (the extra-nutritious pollen provides sugars, fats, fiber and protein that aid in ovarian development). Syrphids from two genera, Chalcosyrphus (aka Xylotomima) and Xylota, are called leafwalkers. The BugLady found one source which said that adults of these genera feed on deposits of aphid honeydew and pollen on the surfaces of leaves, rather than on flowers – hence “leaf walker.”

The wonderful Minnesota Seasons website speculated on how common the Black-winged leafwalker is, saying that “It is found in North America east of the Great Plains. It is said to be common but there are relatively few reported observations. This may be due to the appearance and behavior, both of which mimic blue mud wasps.”

Well, it’s Groundhog Day (and the bottom is about to drop out of the thermometer), and as we here in the Midwest like to say, if the groundhog sees his shadow, we have six more weeks of winter; and if he doesn’t, it’s a month-and-a-half until spring.