The BugLady found today’s BonusBug, a Black Saddlebags dragonfly, sitting on a sidewalk on a chilly end-of-August day. It seemed to be a bit stunned, from either the cool temperature or from some kind of impact; comments accompanying a number of the Black Saddlebags photos displayed on bugguide.net note that they were photographed on cold days. After riding around in the BugLady’s car for a while, this individual recovered enough to fly away. Like albatrosses, Saddlebags are known for spending the greater part of each day in flight, rarely perching. So, while the BugLady prefers her insect photographs without palm prints in them, it is unlikely she could have caught up with this dragonfly on a balmy summer day.

Like all successful invaders, they are generalists. They have been recorded as eating some 300 species of plants (sources give numbers between 200 and 400). Woody? Herbaceous? Vine? Flower? Doesn’t matter. 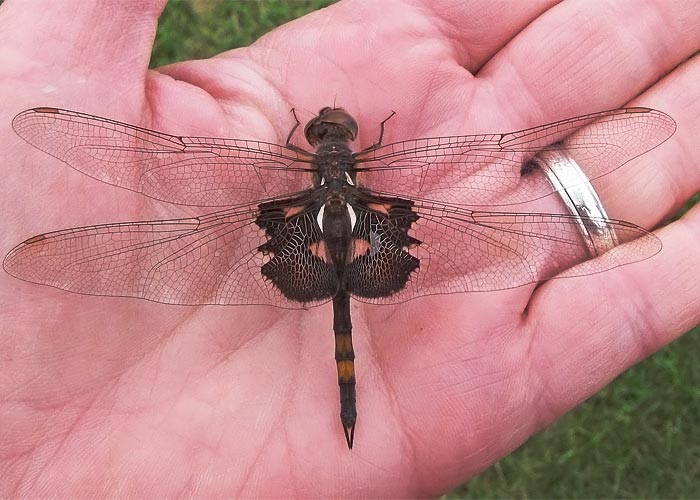 Saddlebags are in the Skimmer family Libellulidae. There are seven Saddlebags species in North America, but four of those stay well south of Wisconsin. They are strong flyers, and their flight is described as a “flap-glide” that may reach 17 mph. They patrol fields and pond edges for their prey—soft bodied flying insects like moths and mosquitoes which they eat on the wing—and large swarms of feeding males have been reported. The dark patches/bands on the wide hind wings shade their abdomens on sunny days. 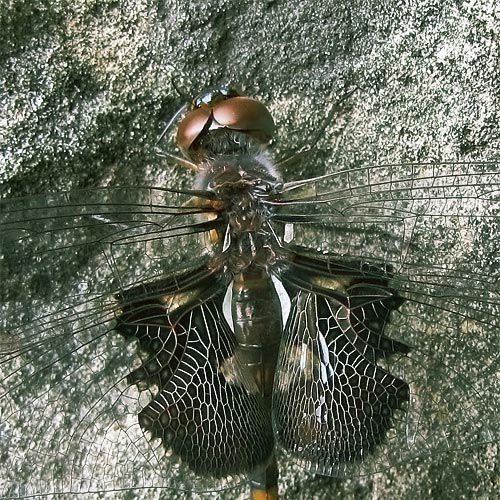 After mating, the pair continues flying in tandem as she lays eggs. He releases her to drop to the water’s surface and lay a few eggs, and then she returns to him and he fastens his claspers on her neck for another bit of flight before she lays more eggs. One source speculated that he holds on to her so he can continue to stake his claim on her (a different source noted that if she mates again with a new male, Mate #2 will remove the sperm of Mate #1), but that he releases her so that he can stay safe from potential predation by fish. This all sounds faintly anthropomorphic to the BugLady who is wondering about the female’s risk in approaching that same water’s surface. 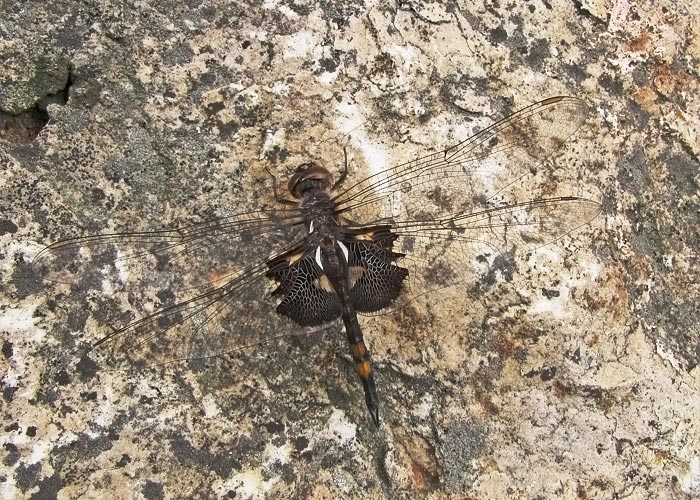 Monarch butterflies, famously, migrate south in fall, and a different generation returns in spring to re-colonize Wisconsin. Several other kinds of butterflies migrate less dramatically, and a number of species of dragonflies (the Darners and some Skimmers) also make the trip. They move along the seacoast or along inland lake and ridge lines, often in numbers large enough so that they must compete for available roosting spots that when it is time to settle down for the night.

It is a truly awesome and a primordial experience to stand along the bluff of Lake Michigan on a soft day in late September and be surrounded by thousands of darners and saddlebags that are moving south along the lake shore.