The BugLady may have mentioned how her far-sightedness can turn photo editing into a series of revelations—some delightful and some frustrating. In short, she discovers things while editing that she didn’t quite see while photographing, and sometimes wishes she had photographed better. The details of this lovely (but, let’s face it, with that white face and those red eyes, a little creepy-looking) Black-legged Meadow Katydid (Orchelimum nigripes) were a happy surprise.

Katydids are more often heard than seen, which is our loss, because they are spiffy-looking insects. At an inch-plus in length, the sturdy BlMK is larger than most Meadow Katydids. It’s identified by the aforementioned face and eyes, plus a bluish-green body, wings longer than its abdomen, and colorful legs—with yellow on its front four and black on its hind two. The female has an up-curved ovipositor.

Like our seldom-seen frogs, our seldom-seen grasshoppers, katydids and crickets can be identified by the calls that males produce in order to attract females. Katydids generate sound by rubbing specially-textured wing edges together (stridulation—producing sound by friction); the BlMK’s call is described as a few “ticks” followed by a buzzy trill. The call, which lasts for two-to-four seconds, may originate from the top of a clump of weeds/grasses or from a tree. Cornell University’s Macauley Library is one of several sites that offer a recording. Singing Insects of North America (SINA) website also provides recordings of insect calls. 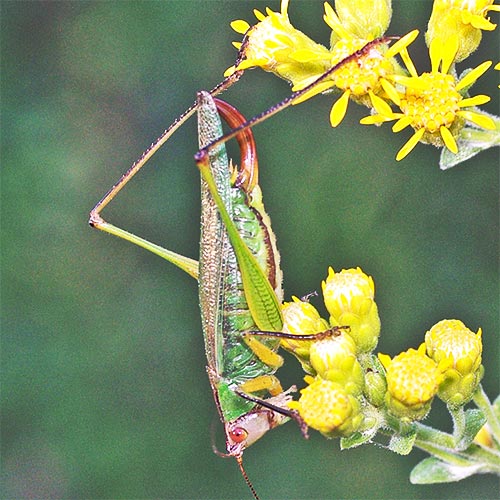 BlMKs are in the family Tettigonidae (the Katydids or Long-horned Meadow Grasshoppers), which is in the order Orthoptera, but they are more closely related to crickets than to katydids or grasshoppers. They are residents of grasslands (meadows) and gardens, preferably damp ones. BlMKs overwinter as eggs that are laid in the soil or in plant stems and that hatch in late spring. They start life near the water’s edge (riparian habitat) and may move into drier habitats as they age.

What do they eat? Well—grass— they’re grasshoppers, right? Several reputable sources do confirm that BlMKs feed, often nocturnally, on seed heads of grasses as well as on a variety of other plants. One source said that BlMKs can be a very minor pain in the garden. The BlMK, along with some other almost-blameless insects that the BugLady has researched, is included on a website called Invasives.org, keeping company, inexplicably, with some seriously bad hombres. BUT, like a number of other Orthopterans, BlMKs are not strict vegetarians. One blogger observed a BlMK that was singing while feeding on a caterpillar (a mental picture that enchants the BugLady), and BlMKs are on a list of more than two dozen predators of the Southern Green Stinkbug (Nezara viridula), an Ethiopian import that is a pest of soybeans and other legumes.

Part of the BlMK story involves who it keeps company with. BlMKs look very similar to the Handsome MK, O. pulchellum. Their combined range is like a horseshoe, with the BlMK traditionally on the west side of the Appalachians through the Great Plains and the HMK on the Eastern Seaboard. The two species overlap at the bottom of the horseshoe, in Mississippi and Alabama (and also along the Potomac River Basin, where BlMKs seem to have been introduced and from which base they are heading north through the Atlantic states, replacing the HK in some areas). Where they meet, they hybridize. Has their hybridization been studied? Oh my, yes! 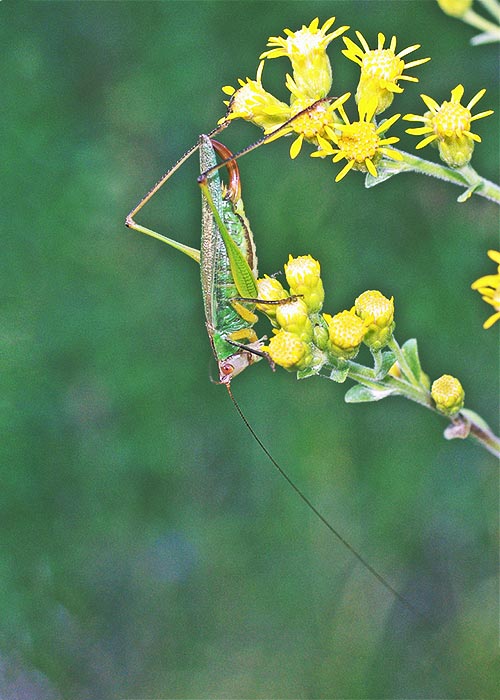 It takes Two to Tango. In the case of the BlMK and the HMK, it starts with courtship, with the male’s call, which is very similar to the BlMK but not identical. Song, behavior, appearance, maybe odor, and the chemicals the male bestows when they mate may all factor into compatibility. Females “rate” a male by the vigor of his song and by his size (both are signals of his manly prowess).

Caged female BlMKs that are presented with males of both species, prefer male BlMKs but will “settle” for HMKs if they’re the only game in town. Female HMKs don’t care. That’s pretty much the way it works out in the field, too. Analyses of mitochondrial DNA, which is inherited from the mother’s side of the family, indicate that BlMK x HMK hybrids mostly have HMK moms and BlMK dads. Their appearance and songs fall between the two species.

Why the fuss? When she mates with an HMK, a BlMK doesn’t lay as many eggs. Maybe the HMK male’s chemicals don’t adequately stimulate her to develop eggs and/or to oviposit. The up-side is that the eggs she does lay hatch successfully and enjoy good survival rates; the down-side is that her hybrid male offspring may be sterile.