Black fly – The Bug. The Legend. 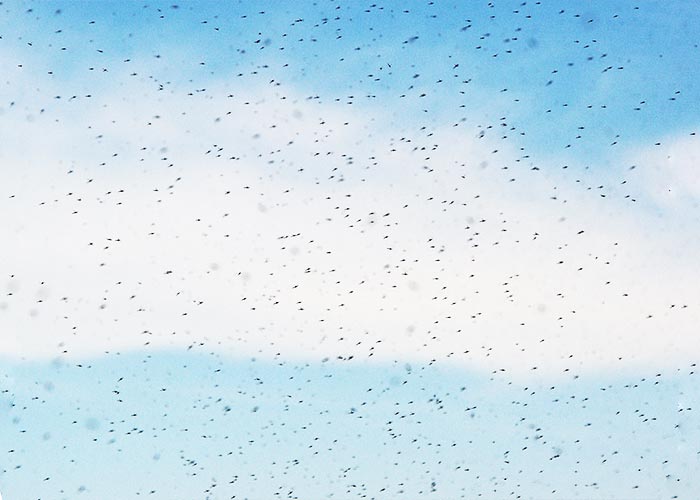 Here’s a slightly enhanced episode from 2012.

Nobody’s on the fence about black flies.

Black flies are also called turkey gnats and buffalo gnats, and people who live in black fly country have a whole bunch of other names for them that can’t be repeated here. Entomologists call them true flies (order Diptera) in the family Simuliidae. There are more than 1,800 species in the family worldwide (100 in North America; 30 in Wisconsin), and most of them belong in the huge genus Simulium. What do they look like? Their hump-backed thorax and down-tilted head makes buffalo gnat a good nickname. BFs are tiny (5 to 10 mm) and dark, with clear wings, many-segmented antennae, and big eyes (and teeth, just kidding).

If you don’t have cool/cold rivers and streams, you don’t have black flies, and if you do have black flies, it’s a compliment to the quality of those running waters. Black fly larvae like lots of oxygen and are not tolerant of warmer waters or pollution, a fact that was lamented in an Ohio Cooperative Extension Fact Sheet. In the No-Good-Deed-Goes-Unpunished category, the black fly populations increased when Ohio streams were cleaned up. 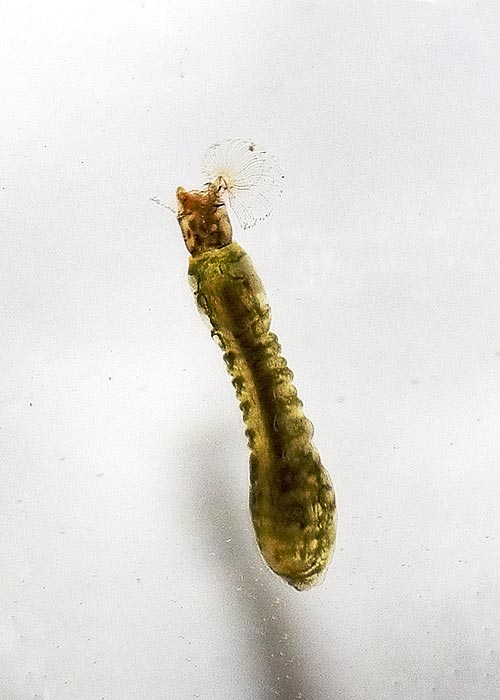 Adult BFs live for about three weeks, laying 150 to 500 eggs either individually on the water’s surface or in clumps attached to rocks, branches, etc. in/above the water (larvae that hatch above the water line immediately drop into the stream). BF larvae are superbly adapted for staying in place and feeding underwater without being swept away by the current. The nether end of their bowling-pin-shaped body is equipped with little hooks that they sink into the surface of whatever they are sitting on https://bugguide.net/node/view/1673475/bgimage. They can also make silk web that helps them to stick tight or to move slowly to another spot. There usually are several generations per summer, with the final generation overwintering as eggs or as mature larvae that are poised to complete their transformation in spring. The summertime larval period takes a month or so, but the pupal stage is only a few days long, spent inside a cocoon submerged in an open-ended basket woven by the larva. Emerging adults float up to the water’s surface on bubbles of air.

BF larvae are passive feeders who expand a fringe/fan around their mouth in order to grab/filter out tiny critters and organic (living or once-living) bits that float past them. It’s the adults’ feeding habits that provoke profanity (“Under certain circumstances, profanity provides a relief denied even to prayer.” Mark Twain).

Like other biting flies, males are blameless nectar feeders. Females may also consume nectar, but they need that all-important blood meal in order to reproduce. Using her sharp, piercing (sometimes described as “blade-like”) mouthparts, a female makes shallow slashes in her prey and then sponges up the blood that flows from its surface capillaries. Injecting a local anesthetic and an anticoagulant allows her to get the job done efficiently (and causes the subsequent itching and swelling). 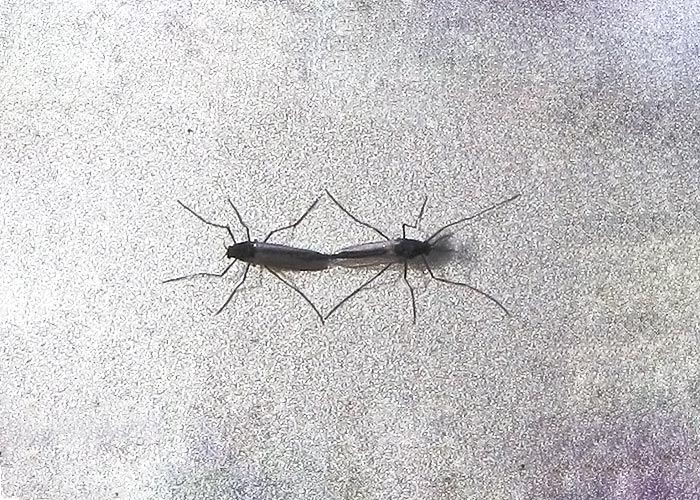 Different species of BFs target different kinds of warm-blooded animals, including humans, and some travel a great distance to do so. Purdue University’s Medical Entomology Department reports that only about six species of BF cause grief for humans in the eastern US (and not all species are prolific biters), though other species annoy simply by their clingy presence. Dense populations of BFs may cause livestock to lose weight and milk production to falter, and here in Wisconsin, a project to reintroduce the endangered Whooping Crane as a breeding species hit a snag when swarms of bird-biting BFs prevented the cranes from bringing off young.

Adult BFs feed by day; they are strong fliers that dislike wind; they love the thin skin on your ears and neck, and your clothing is no barrier; they have temperature receptors on their antennae (the better to find you with, my dear); and they seem to like the color blue. Your personal mix of CO2, sweat, shampoo, etc. may make you more – or less – apt to draw flies.

Much as she loves and practices irony and understatement, even the BugLady feels a little guilty for saying that BFs are a big pest. BFs in the tropics are capable of spreading diseases and parasites, but in the North Country, they are the biting fly that drives people inside when they want to be out – gardening, fishing, canoeing, hiking, camping, or just walking leisurely from the car to the house with a bag of groceries. Getting a few BF bites is irritating; getting a whole bunch can cause “Black fly Fever,” a flu-like reaction to the BF saliva, and people with BF allergies may end up in the hospital. Even dense swarms of non-biting BFs are annoying, because they fly into ears, eyes, noses and mouths. An article about BFs in the Philadelphia Inquirer in 1993 quoted a clergyman who traveled through the “northlands” (probably French Canada) in 1624 as saying that BFs inflicted “the worst martyrdom I suffered in this country.” 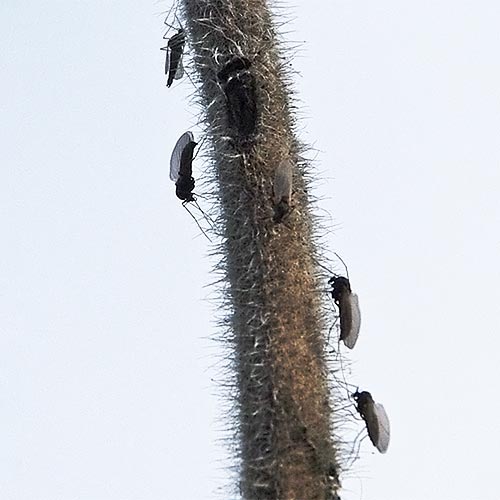 Lots of brain power has been devoted to BF control over the years, and websites, brochures and papers about control measures read like war games manuals. It’s hard to zap the adults because they disperse away from their natal streams, and many pesticides should not be used in the watery habitats of the larvae because they kill other species indiscriminately. Some folks feel that the common repellent DEET may actually attract BFs, but tar oil spread on exposed skin is supposed to be pretty good….. One site recommends wearing an unpainted, aluminum hardhat coated with oil – the hardhat attracts BFs and the oil traps them. A strain of Bt (Bacteria thuringiensis israelensis) has been successful on the larvae but is expensive and labor-intensive. Mechanical methods include brush control and temporary damming of streams (still water carries less oxygen). Fogging provides only temporary relief on small properties. Out-foxing them by limiting outside activities to fly-free periods is best (they are said not to bite indoors), and a good antihistamine to treat the inevitable bites is a great Plan B.

As The Minnesota Conservation Volunteer (a dynamite publication) points out, black flies are valuable native pollinators of wild blueberries, but black flies’ biggest fans are their predators. BF’s are an important fish food, and trout often intercept the emerging adults as they float to the surface. Birds, amphibians, and fellow-insects like dragonflies also eat their share of the BFs that escape into the air.

Some folks embrace the BF. Several towns in New England host Annual Black Fly Festivals (BFs are the unofficial State Bird of Maine). Although Vermont’s Adamant Co-Op Black Fly Festival seems to have fallen by the wayside this year, its motto has been “More fun than is thought humanly possible.” Press releases tell us to “Forget about fiddleheads, peepers, and maple sugaring. Black flies are the real harbinger of spring in central Vermont” and past festivals have featured “Black fly balloons, Black fly Jeopardy, a Black fly fashion show (antennae optional), the Black fly parade, mugs, T-shirts, and live music by the Fly Swatters.” Because, “after a long, cold winter here in Adamant, we need something to celebrate, and God only knows we have plenty of black flies.” The schedule of events for the day concludes with: “4:00 – Grill closes. Festival ends. Blackflies all die.”

Milo, Maine hosts a festival, as do several Canadian towns. The Adirondack town of Inlet, NY features an Annual Black Fly Challenge bike race. Many tourist-related businesses in the Adirondacks close for a month during the peak BF season, which they call “the Fifth Season.”

Go outside – feed the black flies.

On a related pandemic note – apparently, the pandemic has been keeping people off the trails that the BugLady walked today, because when she arrived, the mosquitoes had a noisy celebration.

Bug of the Week archives:
http://uwm.edu/field-station/category/bug-of-the-week/

The 2019 Annual Report is available for viewing