There is no insect-viewing experience quite like walking down a path with the sun at your back and encountering an emerald dragonfly going the other way. The light catches those brilliant eyes and you are stopped in your tracks.

The Emeralds (family Corduliidae) are an interesting bunch. They’re a large and varied family (about 50 members in North America) that includes the bog haunters, emeralds, baskettails, and shadowdragons and that counts seven “most wanted” and one Federally endangered species (the Hine’s Emerald) among its members in Wisconsin. Corduliids are found worldwide, and as a group, they occupy lots of high altitude and northern spots.

Most Corduliids are dark with long, slender abdomens, metallic iridescence, a somewhat hairy thorax (good for warming up in those northern climes), and those big, green eyes that meet at the top of the head. Most have a thin, pale band around the abdomen where the second and third segments meet. The BugLady keeps reading that it’s hard to tell emeralds, both adults and naiads, from the libellulids (skimmers) and maybe they should be reclassified with them, but she’s not so sure about that. 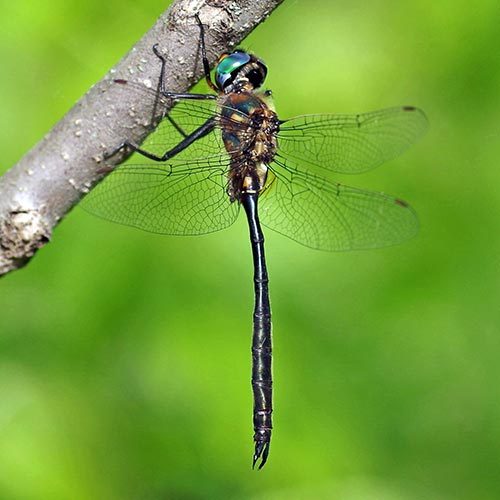 The adults can be seen (or not) perching vertically on branches or leaves. They are “cruisers,” strong fliers that patrol tirelessly at the edge of woods and wetlands; and they often form feeding swarms as high as 30 feet off the ground at the tail end of the day.

Female Corduliids lay eggs on the outsides of aquatic plants (they don’t have the kind of ovipositor that allow them to excavate) or in water or mud, unattended by the male. The dark, hairy naiads are classed as “sprawlers,” mostly sedentary critters that camouflage themselves beneath vegetation/debris and ambush their food (fellow aquatic invertebrates) as it walks/swims past. Naiads are found in a variety of wetland types—swampy, boggy, flowing, and/or cold – where oxygen is in good supply. 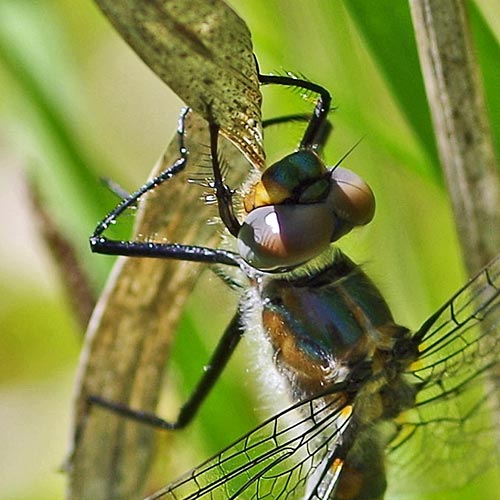 Until 2014, the BugLady’s experience with the big emeralds was limited to finding a road-killed Hine’s Emerald, but last summer, this extraordinary Kennedy’s Emerald (Somatochlora kennedyi) allowed her to walk (slowly) around it, shooting and changing lenses and muttering, and another Somatochlora (possibly williamsoni) flew around her in fall as she tried to un-jam her camera. The Somatochlora species (26 in North America) are called the striped emeralds (though the KE’s pale-to-partially-absent-to-obscure side stripes are diagnostic for the species; see the stripes on the Hine’s Emerald for comparison). They like peatlands, and they range far to the north, in fact, one species breeds in the tundra north of the Arctic Circle. Somatochlora is loosely divided into four groups, based on the shape of the male’s cerci, and the KE is in the “forcipata group.” The folks at the Wisconsin Odonata Survey say about the genus that “Most species are uncommonly seen, but this may be largely due to their secretive nature. When flying, most species look alike which is why in-hand identifications of their anatomical features are often needed.”

According to Kurt Mead in Dragonflies of the North Woods, KEs are found along “slow streams through open areas. Also cold bog ponds.” They also favor swamps, sedge fens and mossy pools. They are not very common in Wisconsin, but they can be found from Alaska to Labrador. Male KEs patrol two or three feet off the ground in the shade along the water’s edge, stopping, hovering, pivoting, and occasionally perching briefly in the vegetation. Females lay eggs while flying slowly, about two inches above the surface, tapping the tip of their abdomen into the water. 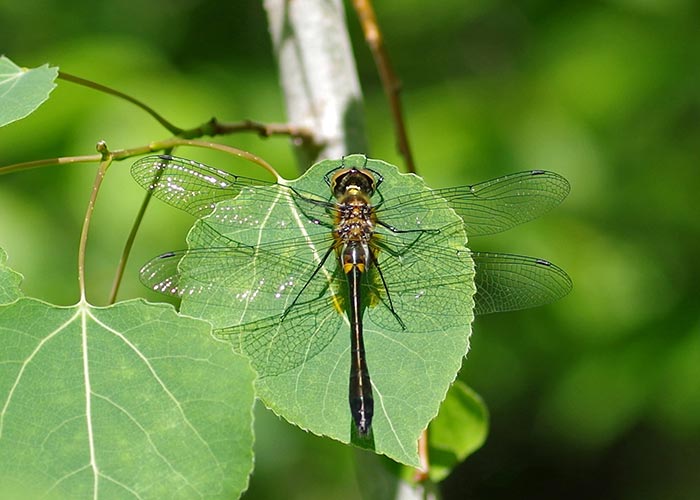 The (approximately) two-inch KE is not particularly gregarious and is often crepuscular—flying at dawn and dusk in feeding swarms, often far from water. It’s seen from mid-May through mid-July (this one was photographed in mid-June); some similar-looking striped emeralds have later flight periods.

Members of the genus Dorocordulia are called the Little Emeralds; there are two species in the genus, and both are North American. A lot of what has been said about the Somatachlora emeralds—metallic, black legs, occupying northern cedar swamps-bogs-lakes-ponds, ovipositing by tapping the open water or clumps of aquatic plants in flight—can be said of the Little Emeralds, but their range lies more eastward, around the Western Great Lakes to Delaware to Nova Scotia. They prefer still water, and they have an abdomen that is narrow at the start and end but flares toward the rear. Their faces are green. 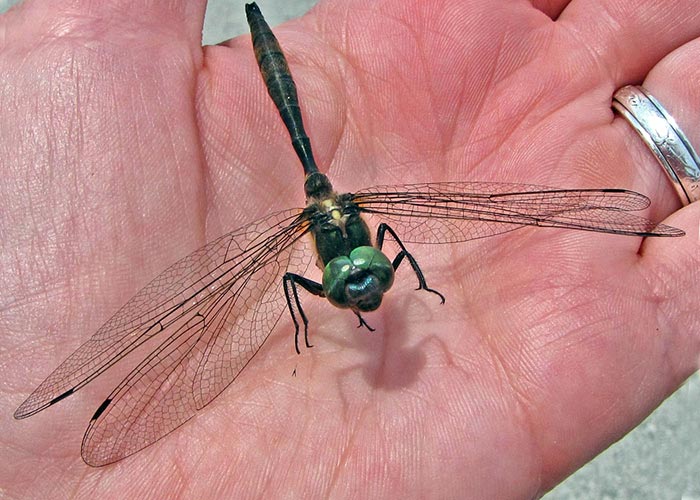 In A Manual of the Dragonflies of North America, J. G. Needham says that the racket-tailed emerald (Dorocordulia libera) is “Common about borders of small, upland lakes where it flies in midsummer during sunshine, gaily in and out of little bays and over shallows. Nymphs inhabit edges of water, commonly under overhanging turf and clamber up projecting roots and stumps to transform.” It’s fairly common throughout much of the Wisconsin.

Needham describes the 1 ½ inch RTEs as “A charming little bronzy-green species… Elegant little dragonflies, with hairy thoraxes and smooth, shiny green abdomens. The thorax is green, densely clothed in the front with tawny hairs, darkened in the depths of the sutures and paler beneath.”

Dunkle, in Dragonflies through Binoculars (a popular and comprehensive book that the BugLady can’t warm up to because its pictures are so tiny) says that the male RTE “patrols with its abdomen slightly arched and tipped upward,” and that it may bask flat on a leaf. He paints the lovely picture of patrolling males occasionally perching on pitcher plant flowers (which the BugLady would pay to see). 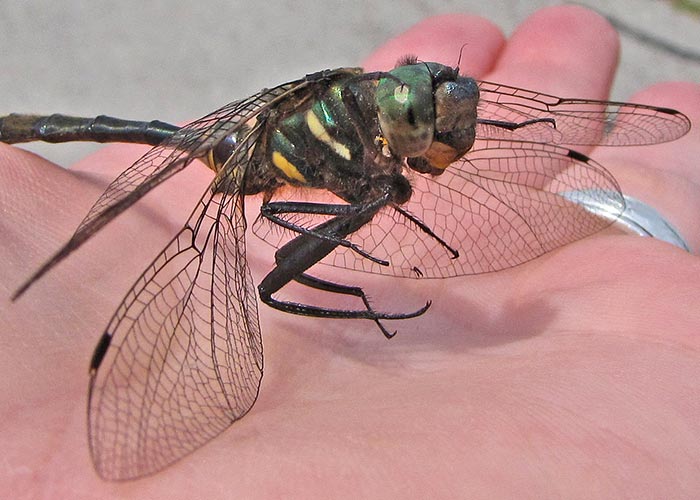 RTEs are not as committed to guarding permanent territories, but they may dart and turn as they patrol small areas temporarily. The BugLady sees RTEs frequently, flying along one of her favorite, wooded wetland paths, but although they land more often than most emeralds do, she can rarely track them. She has read that they may accompany people on their walks, attracted to the insects that are attracted to the people.