The BugLady enjoys Bee Flies; she especially admires the little flying teddy bears in the genus Bombylius and Systoechus and can never resist trying to photograph one (to her camera’s dismay). Bee flies (family Bombyliidae) also come in larger, more robust models. As a group, they are big-eyed, with long legs, and long wings that are often strongly-patterned and are held out to the sides like a “V” when at rest. Because they hover, they’re mistaken for Flower-Hover-Syrphid flies. Like Syrphid flies they are bee mimics, but where Syrphids are smooth, BFs are characteristically hairy. Their long proboscis allows them sip nectar from flowers; they do not sink it into mammalian flesh. 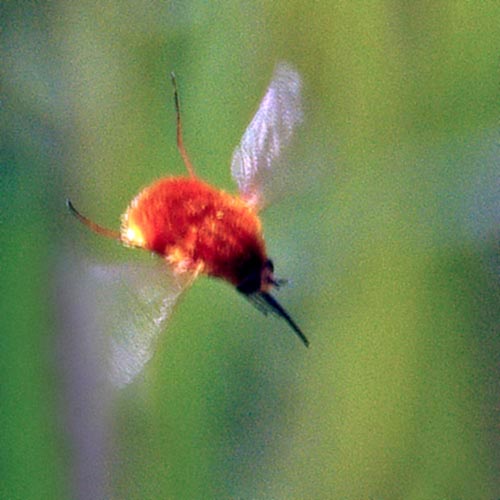 It’s a big family that’s been around for about 140 million years, and so there are BFs everywhere, but they’re especially diverse in dry country. Their lifestyles are somewhat similar, though there are gaps in the life histories of many species.

Adults, which are diurnal (active in the daytime), feed blamelessly on pollen and nectar from flowers (they do like composites), but most BF larvae are external parasites/parasitoids on the larvae of ground-nesting insects—insects that practice, like the BFs themselves, Complete Metamorphosis (wasps, bees, flies, beetles, moths and butterflies). Some oddball BFs feed inside the egg pods of Short-horned grasshoppers. Female BFs hover as they hunt for the nests of their offspring’s hosts. When they see a likely-looking tunnel in the ground, they lay eggs on the soil nearby.

Like the Blister Beetle (of recent BOTW fame), BF larvae are unusually active when they first hatch, using the extra mobility that characterizes hypermetamorphosis to secure a place at the table in the host’s nest. During their subsequent sedentary instars, they consume their host from the outside-in (different species of BFs favor different hosts), and then pupate on site. According to the wonderful bugguide.net, the pupa is equipped with spines or spikes to drill out of the host’s nest.

Here are some of the larger local BFs. Caveat: the BugLady once again admits the limitations of “picture-keying”—she thinks these IDs are “close.”

Chrysanthrax cypris doesn’t have a common name. Kaufman and Eaton in their Field Guide to Insects of North America, advise us to “look for adults on low-growing composite flowers. The larvae are parasitic on white grubs, the larvae of Phyllophaga scarab beetles” (the May/June beetle/bugs). 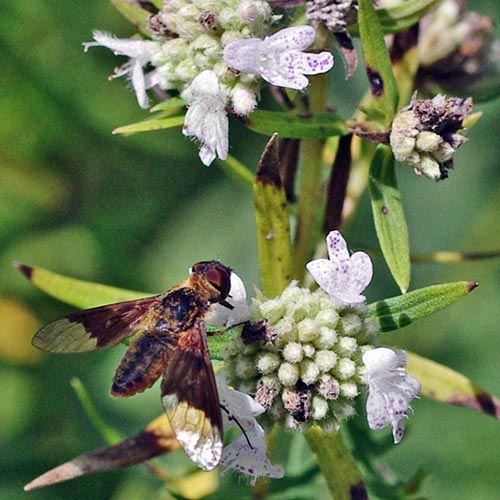 Progressive Bee Fly (Exoprosopa sp., possibly E. decora). The BugLady didn’t see any explanation as to why some/all members of the genus Exoprosopa are called “Progressive.” Members of the genus are among the largest BFs, with some measuring three-quarters of an inch long. This species is about a half-inch; one source describes its head as “loosely attached,” and another calls the clear patch in the middle of the wing a “Snoopy-shaped spot.” 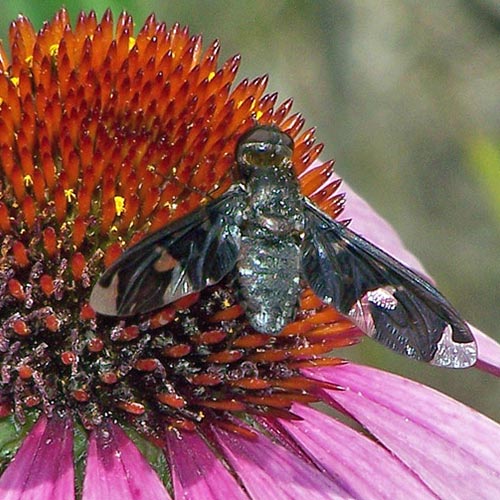 According to Kaufman and Eaton, “the larvae are apparently parasitic on other parasites of bee, wasp, or beetle larvae living in the soil,” including, apparently, robber fly larvae. A parasite of a parasite is called a hyperparasite or an epiparasite.

The Latin name of the Chocolate Bee Fly (Hemipenthes sinuosa) comes from hemi (half) and penthos (mourning) referring to a wing that is half draped in black, and sinus meaning curving or undulating, referring to the wavy border of the dark wing patch. It is also called the Sinuous Bee Fly. Chocolate Bee flies are also hyperparasites who specialize in larval ichneumon wasps and tachinid flies, which parasitize caterpillars. 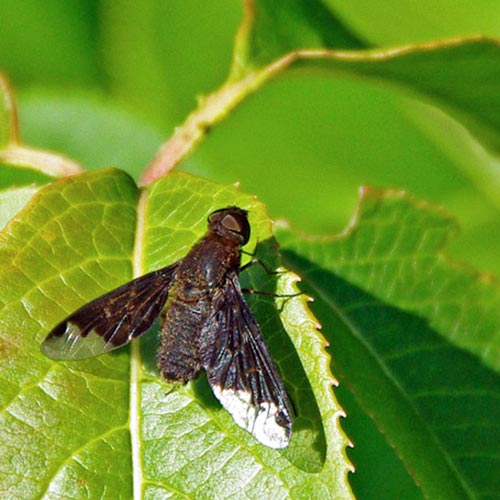 Anthrax irroratus (maybe) takes a little explaining. Irror means freckled-speckled-bedewed and refers to the sprinkling of spots on the wings. The more alarming Anthrax comes originally from the Greek for carbuncle or coal, and possibly refers to the rough surface or fleshy-looking “hairs” on the abdomen. 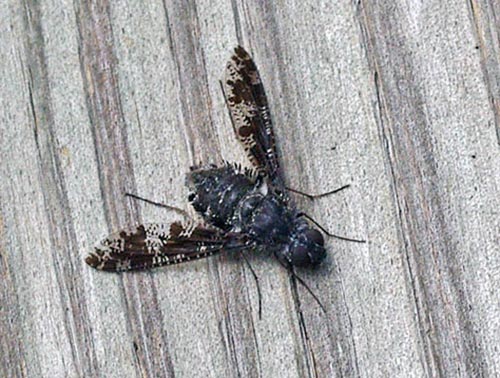 Most Anthrax larvae parasitize the young of solitary, ground-nesting wasps, but one species feeds on tiger beetle grubs. Anthrax are nicknamed “Bombers” for their habit of hovering at the entrance of a tunnel and tossing eggs into it while in flight (with fingers crossed that the hole is occupied. A wing and a prayer). There are accounts of Anthrax landing on people and of females mistaking a dark spot on clothing for a likely tunnel and lobbing eggs at it.