This week’s episode features a Bevy of Beetles. Beetles are in the order Coleoptera, which you Latin and Greek scholars know means sheath wings. Their pair of membranous, flying wings is covered at rest by a top second pair of wings (the elytra) that protects them, but because the elytra have to be held out to each side in flight, they fly awkwardly.

The elegant Long-horned beetles (family Cerambycidae) have antennae that may be twice as long as their body. The family includes many species with names like “borer,” (stump, root and bark, but not the infamous Emerald Ash Borer which resides in a different beetle family), “sawyer,” “pruner,” and “girdler,” so we know what they are up to in their spare time and why some species are so unpopular with the timber industry. For the same reasons, they are important players in Mother Nature’s recycling program. The larvae of many species rummage around in trees and shrubs, living or dead, often leaving characteristic trails in the wood, under the bark. According to Kaufman, in the Field Guide to Insects of North America, others girdle a twig or small branch and lay an egg in the groove; when the grub hatches, it eats now-dying twig that its mama provided. Some long-horned beetles “vocalize,” producing a squeak made by friction when they nod their heads. The beetle above (who might possibly be Centrodera decolorata—many insects do not have common names) is about 1 ½ inches long, excluding its antennae. 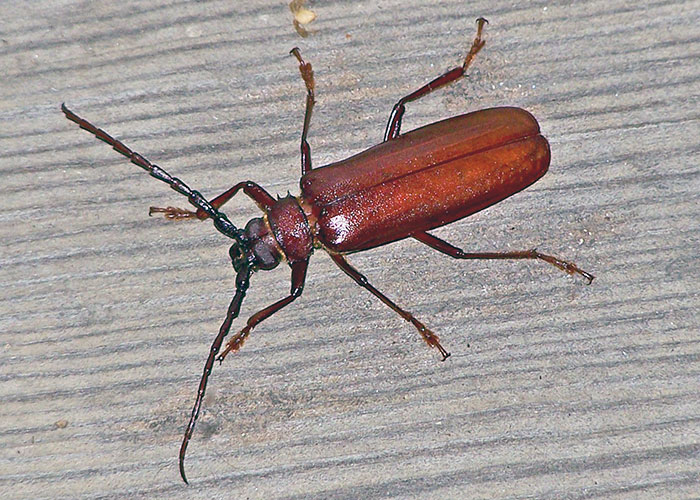 The Bug Lady has photographed hundreds of insects and has never been bitten/stung in the course of taking their portraits, but she won’t touch this beauty, found on goldenrods during the month of August (and we’ll discuss ants at a different time…). Blister beetles produce on their persons an irritating substance called cantharadine, once used as an aphrodisiac. If you touch them, you’ll get a dry, itchy blister that will last about a week. One identifying feature is the fact that their elytra (ee-lee’-tra), the hard, modified forewings that cover the softer, folding flying wings, are somewhat shorter than the abdomen. 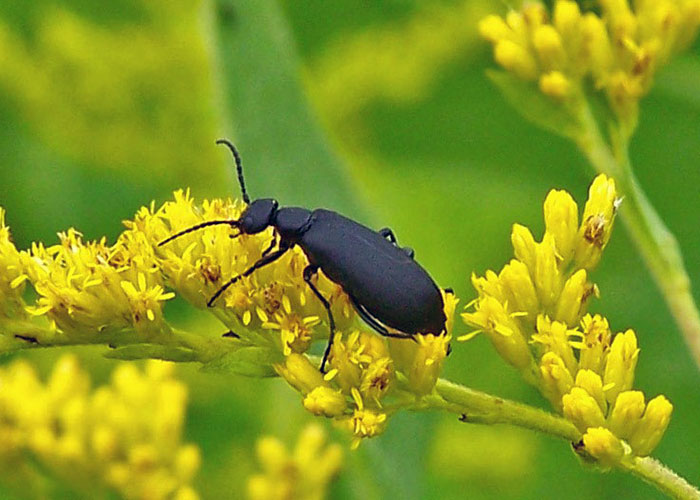 Despite the efforts of TV advertisers to sell you tranquilizers made of St. John’s-wort, the plant is not welcome over much of its range. St. Johns-wort is a sun-loving, alien invasive plant that loves road edges, fields and pastureland. When cattle (and susceptible people) eat it, the incomplete metabolism of its pigment dots results in chemicals being deposited just under the skin layer. That causes the consumer to become extra sensitive to the sun’s rays and to burn easily. Klamathweed beetles were originally released on western grazing lands (they seem to be moving east), and from what the BugLady has seen in her fields, they do an effective job on St. Johnswort. The BugLady, however, has reservations about the concept of introducing one foreigner to eat another foreigner, as in “No worries, Mate—when it finishes eating the (fill in the blank) it won’t move on to anything else…” 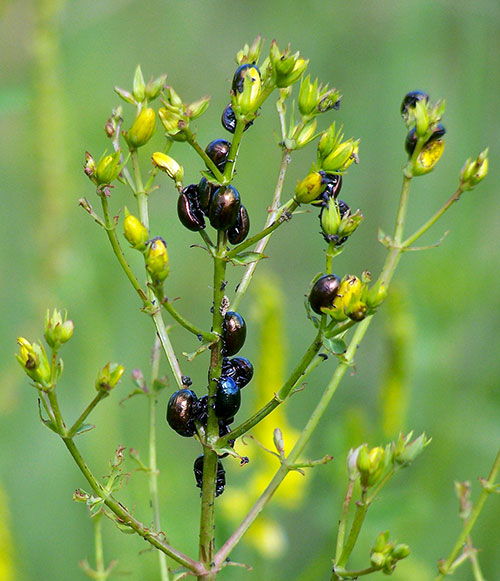 Beetles are the largest order within the Class Insecta. Every fifth living thing (not every fifth INSECT, not every fifth ANIMAL – Every! Fifth! LIVING THING!) is a beetle.