Baskettails are among the early dragonflies of spring, their flight periods usually completed by mid-summer. They are members of the family Corduliidae (the Emeralds), dragonflies with evocative names like sundragon, river cruiser, boghaunter, and shadowdragon. Within the Corduliidae, Baskettail taxonomy is a little confusing. In his comprehensive Dragonflies and Damselflies of the East, Paulson places them all in the genus Epitheca, but other sources divide them up into two (sometimes three) genera Epicordulla, Epitheca, and Tetragoneuria. 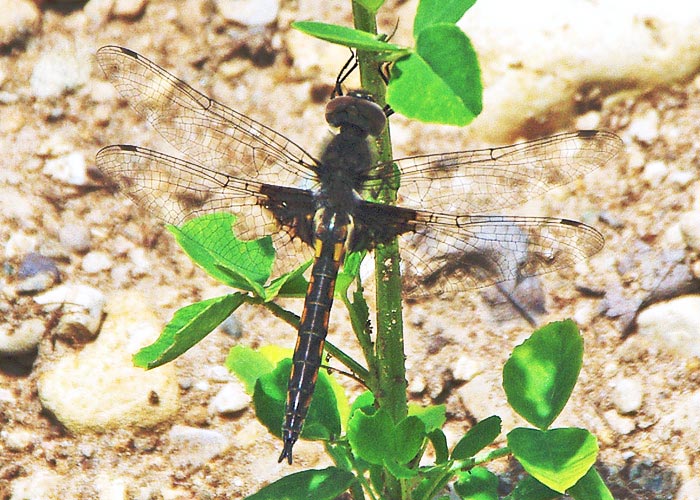 Medium-sized and generally lacking the metallic coloration and dramatic, kryptonite-green eyes of other Emerald family members, baskettails favor brown bodies with yellow spots down the sides. Their clear wings may sport dark splotches—or not. According to Dragonflies through Binoculars, “our baskettails include the large and distinctive Prince Baskettail, and 8 small species, the ‘sparrows of the dragonflies,’ which are very difficult to identify.” They are described as agile and acrobatic flyers that often form feeding swarms in clearings away from water and that can consume their prey while in flight. When they perch, it’s vertically or at an angle.

Both the immature (naiad) and the adult are hairy. Tiny pieces of debris adrift in its underwater habitat get trapped in the naiad’s hair, hiding it from fish and other predators as it lurks on a pond floor. Hair on an adult’s body, especially on its thorax, helps keep this spring species warm. As Cinthia Berger explains in her book Dragonflies, “like real fur, the fuzz helps hold in the heat generated by those muscle contractions” [contractions of the flight muscles, which raise the temperature within the thorax].

The name comes from the mass (“basket”) of eggs the female forms and then carries around at the tip of her abdomen. According to Bugguide.net, the genus name Epitheca is derived from epi (above) and theca (pouch or basket); females cart their eggs around, sometimes all day, abdomen elevated, looking for the right spot to deposit them. 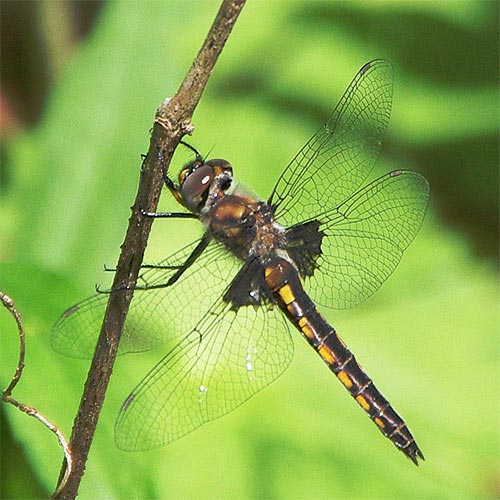 The right spot has shallow water with floating-leaved vegetation, and there are different accounts of what happens when she finds it. She either attaches her ball of eggs (hundreds of them) to a submerged plant and then departs, or she drags/taps her abdomen along the water’s surface, unraveling her string of eggs as she goes. In either case, the once-compact egg mass swells into a long strand, from six inches to several feet long and an inch wide.

A choice location attracts numerous females, and multiple strings of eggs may drape the aquatic vegetation like streamers. The eggs stay near the surface in water that is warm and oxygenated, and development is fast. If a cluster of eggs is very dense, those in the center may not mature. Sometimes algae infiltrate the egg strands, increasing through their photosynthesis the oxygen available to the developing naiads. Where many females have dropped their eggs, high concentrations of naiads will shortly be found.

The BugLady has been guilty of putting all of her Baskettail pictures in one basket (so to speak). It wasn’t until she started researching this episode that she noticed that she may have (at least) two species of Baskettail, the Common and (possibly) the Spiny. Or not. Once again, the BugLady is treading where angels fear to—identifying baskettails using photos is “iffy.”

Common Baskettails (Epitheca or Tetragoneuria) cynosura) are found in still or very slow-moving waters in the Eastern half of North America. There’s some discussion about the meaning of cynosura; the consensus is that it comes from the Greek cynosure, meaning dog’s tail, and refers to the male’s cerci (abdominal appendages), which curve outward away from each other and (allegedly) look like a dog’s tail wagging back and forth. The cerci along with the dark, triangular patches at the base of the wing are unique to this species. The eyes of juvenile CBs are reddish brown, turning blue or green as they age. They’re about 1 ½ inches long. 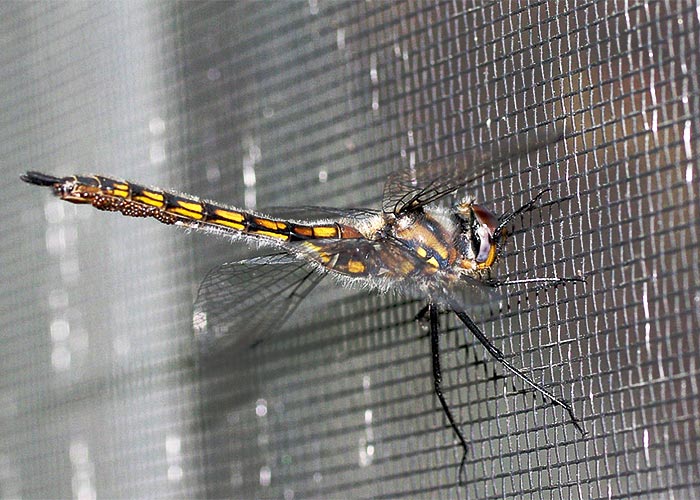 The BugLady found the CB listed in an amazing report called “Observations of dragonflies visiting lights at night.” This Canadian study documented nocturnal activity in several species of migratory and non-migratory dragonflies. Nocturnal hunting behavior has not been observed, and researchers are mystified.

The Spiny Baskettail (Epitheca/Tetragoneuria spinigera) is named for the spine that is present at the base of the male’s cerci. Unlike the eastern-oriented CB, the SB is found from coast to coast over the northern half of the U.S. and into southern Canada. Its habitat preferences are similar to the CB’s, but it tolerates more acid waters.

At about 1 ¾ inches long, it’s a shade larger that the CB. Adults have green eyes, and juveniles, reddish brown ones. Wings are generally spot-free, but some have small, dark areas at the base of the hind wing (CBs generally have noticeable spots that are greatly reduced in some individuals—by their cerci and facial markings shall you know them).

Because the SB (like many other species of dragonfly) overwinters as a mature naiad, it’s ready to complete its transformation when the waters warm. There are accounts of mass emersions of SBs, with dragonflies hanging from every branch. 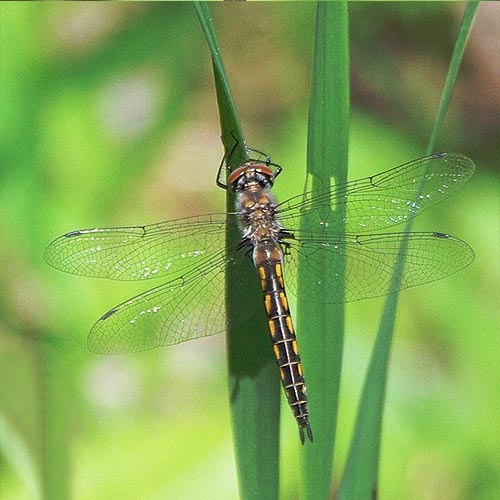 Like the male CB, the male SB also patrols at the water’s edge, stopping to hover and scan the horizon for females. Adults rarely rest.

The (alleged) SB sitting on the screen is afflicted with water mites, the spheres on the last few segments of its abdomen. Larval water mites go through a parasitic stage, attaching themselves to other aquatic invertebrates, including immature dragonflies and damselflies. When their host is making its final molt into the adult stage, the mites politely step aside, and then reattach when the exuvia has been shed and it’s time for take-off.

Paulson says that to find Baskettails, “Go out early and look in sunny clearings, where they may be perched in the open trying to warm up to start their feeding flight.”