Most people don’t like aphids, and they get “creeped out” when they hear the word “lice.” Barklice are not related to aphids, though barklouse congregations are sometimes mistaken for aphids. Barklice (family Psocidae) (so-ci-dee) are in the same order, Psocodea (so-so-dea), as booklice and as the sucking and chewing lice (older references list them as Psycoptera), but the barklouse is a more wholesome-looking bug than its shiftier cousins, and its lifestyle is dramatically different. The BugLady photographed this barklouse (Cerastipsocus venosus) (probably) thinking it was some kind of plant bug, but her bug guru, Chris, rode to the rescue once again. It takes a village. 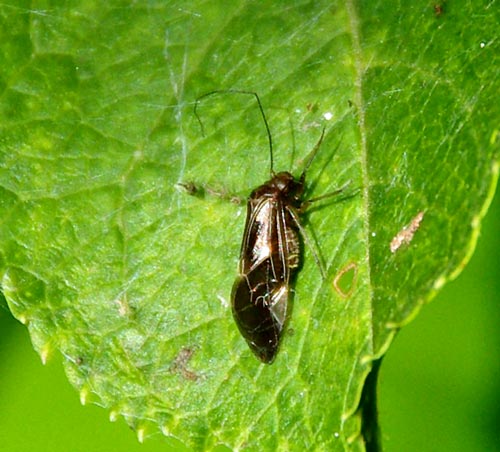 Psocodea is a small order of small insects—about 62 species of barklice reside in North America. Barklice are small, chunky, big-headed, “bug-eyed,” long-antennaed insects, many of which have four wings. The front set of wings is longer than the rear set, and the wings are held tent-like over the body at rest. The wings of BLs have very few veins and cross veins, and in Cerastipsocus venosus(Cv), these veins are often white. Although they can fly, they prefer to run when disturbed. At about ¼” long, Cerastipsocus venosus is on the heftier end of the continuum; females tend to be larger than males, and there can be a lot of physical variation within a species.

How can you find one? Cvs are relatively common in the eastern half of the country and are often found on the trunks of smooth-barked trees (Cerastipsocus venosus likes the maple family, which includes the box elders). Because many BLs live in leaf litter or under loose tree bark, they generally pass their days unnoticed, as they have done since the Permian Era, some 250 million years ago. The more gregarious species attract notice when a bunch of them gather in a dense “herd” on tree bark, a habit that gives them the names “bark cattle” and “tree cattle.” Other species are web spinners, producing silk in glands in their mouth. They may cover a section of tree trunk with a patch of web or enclose the truck or branches in a silken sheath.

When a young BL’s Fancy turns to Love, it may engage in a courtship dance, after which she accepts a spermatophore (liquid, in the case of Cerastipsocus venosus) from him. But many other species of psocids reproduce parthenogenetically, which means that Ms. Psocid needs no assist from Mr. Psocid to produce little Psocids. Reproductively speaking, Cv’s have an odd chromosome that doesn’t divide like the rest in early meiosis (the BugLady is confident that BugFans remember meiosis and those microscope slides with chromosomes dividing and heading for opposite poles). Half of the secondary spermatocytes, and therefore half of the spermatozoa, down the line, have an extra chromosome. Don’t ask the BugLady why.

BLs practice Simple (Incomplete) metamorphosis. Bugguide has a great picture of the pudgy, striped nymphs. Web-spinning BLs deposit their eggs on bark, singly or in bunches, and cover them with a layer of silk. All generations in a colony will live under this shelter briefly and then, apparently, will eat it. Cvs protect their egg clusters with a crust of what several sources delicately call “alimentary excretions.” It takes about 6 molts for nymphs to reach adulthood, and they probably overwinter as eggs.

Despite home-owners’ fears when they see a crowd of insects on their trees (eliciting headlines like “Tree cattle causing undue concern”), neither the adult nor the immature Cvs eat trees, leaves or even bark. They use their chewing mouthparts to graze on tiny plants like algae and lichens and on molds that grow on the tree bark substrate, or they scavenge on pieces of organic material (detritus). To this end, part of a BL’s “lower jaw” (maxilla) is modified into a rod that the insect uses to brace itself while the “upper jaw” (mandible) is scraping up its food. They are listed as scavengers/decomposers. Birders please note—one source mentioned that Chimney Swifts catch and eat adults when both are on the wing.

The BugLady is troubled by a website called Invasive.org; Center for Invasive Species and Ecosystem Health whose sponsors include several Federal agencies and a few departments of the University of Georgia. Their site comes up on her searches with some frequency, even when the insect she is researching is not considered harmful. There is a page devoted to PL images, but no allegations of damage—even the Exterminator sites say “these bugs are harmless; if you don’t like the webs, spray them with the hose.” Like Exterminator websites, this site gives even the “neutral” bugs a bad name by association (the BugLady tries not to assign pluses or minuses to bugs).