In anticipation of things green and blooming …

A teacher friend told the BugLady that her students were grossed out when they collected prairie seeds and then found the bags crawling with tiny beetles the next day (and some of the seed pods full of frass (BugPoop)). She produced some beetles, and the BugLady photographed these Baptisia Seed Pod weevils (a.k.a. Wild indigo weevils or Say’s weevils) lying between the lines of her notepad (thanks, Jean). Baptisia is both a common name and the genus name for the Wild Indigos/False Indigos. 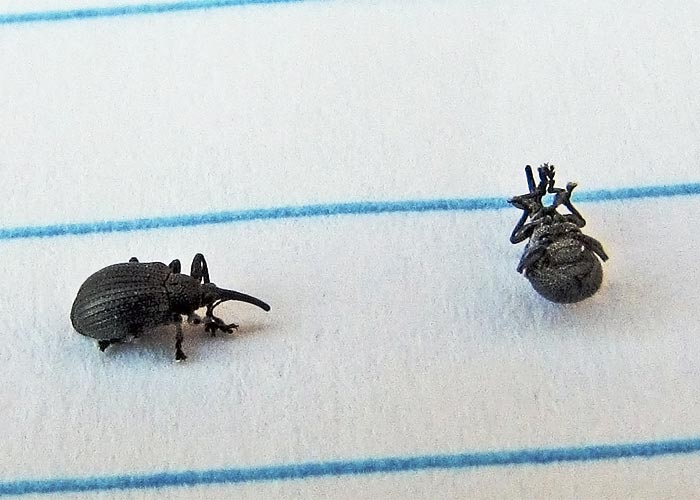 Weevils (family Curculionidae) are the largest family in the beetle order, but despite its common names, the Baptisia seed pod weevil (BSPW) (Apion rostrum) is (now) in the family Brentidae, the “primitive” or “straight-snouted” weevils. Brentids have straight-ish beaks, while the beaks of true weevils curve downwards (older references put Apion in with the true weevils; more recent sources put them with the Brentidae). Apion is a huge genus with more than 1000 species of generally small beetles (at about 4mm, the BSPW is larger than average). As veteran BugFans know, the BugLady is a history geek, and she was thrilled to find this (abridged) description of the genus Apion in the 1852 edition of The Rural Cyclopedia:

A large genus of insects of the coleopterous order. It comprises many of the smallest individuals of the weevil tribe … About ninety species of it have been enumerated by Naturalists; but many of these can be distinguished from one another only by the aid of a microscope; and only two or three are conspicuous enough in mischief to challenge any notice. The largest insects of the genus do not exceed two lines and a half in length, and some scarcely measure one line. Their crust is usually very hard, and not unfrequently adorned with somewhat vivid metallic tints, and sculptured with deep parallel furrows and catenulated [having a chainlike form] lines. They take their name from a Greek word which signifies a pear, and present a considerable miniature resemblance to that fruit in shape; their antennae are scarcely or not at all bent … In their states of at once larva, pupa, and perfect insect, they feed on plants; and in the case of several of their species, they are permanently and exclusively attached to particular plants in the same appropriating manner as the species of aphids. 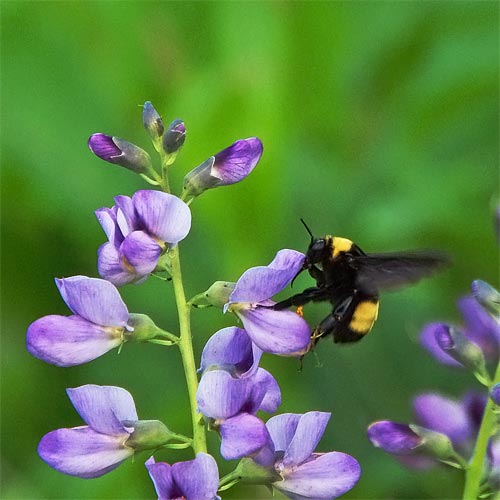 BSPWs are “Baptisia-centric” (though an issue of The Ohio Naturalist from 1905 lists them as Black Locust feeders, too). It seems that the denser flower stalks that make some species of Baptisia more attractive to bumblebees (their main pollinator) also make them more attractive to BSPWs (their main seed eaters). Adults eat leaves and flowers in very early summer, moving from one Baptisia species to the next as they bloom. When the green pods form, the females bore into them, preferring the larger pods. Remember, a weevil’s chewing equipment is located at the tip of its cute little snout, making the BSPWs mandibles tiny indeed. According to one source, after she excavates the hole in the pod and lays her egg, she uses her snout to push the egg into the pod.

The BSPW larvae (grubs) are called “pre-dispersal seed predators” because they don’t wait for the nutrient-rich seeds to fall, they hatch and start noshing on the developing seeds within their pods. BSPW larvae pupate inside the pods, too, and the freshly-minted adults must either bore a tiny escape hole in its side or wait for the pod to dry and split. Some even overwinter within the pods. BSPW populations wax and wane, but at their peak, they can wipe out a fair chunk of the summer’s seed crop. The BugLady is a big fan of prairies and of Baptisia, but she doesn’t lose any sleep over the depredations of BSPWs because the long-lived Baptisia is, as a fellow prairie-fancier says, a “thug” on the prairie. In fact, an Iowa DNR publication calls the BSPW “Mother Nature’s control of Baptisia species.”