Like the Buckeye butterfly of recent BOTW fame, the Baltimore/Baltimore Checkerspot (Euphydryas phaeton) is in the fleet-flying, spiny-caterpillered Brush-footed butterfly family. In our neck-of-the-woods, Baltimores are found in damp, open situations where their chief food plant, turtlehead, grows, but they are found in dryer habitats farther south.

Young Baltimore caterpillars feed communally. After hatching, a cohort of caterpillars will spin themselves inside a web on their chosen plant and feed on it. A few sources say that they hibernate as a group over the winter; other references say that they leave the group in mid-fall and hibernate alone. In spring, in any event, they emerge, still caterpillars, hungry and much less picky. They feed alone on whatever plants they can find, form a chrysalis and, 10 days later, emerge as adults into the sunlight of early summer; there is only one generation per year. 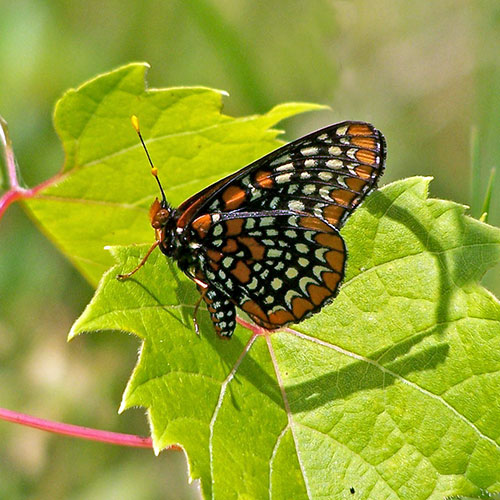 When the early settlers got to North America, they found an orange and black bird that they named the Baltimore oriole – not necessarily because they were, geographically, in Maryland, but because of Lord Baltimore, a powerful Englishman whose servants wore the family colors, orange and black. When the American Ornithologist’s Union renamed the Baltimore Oriole the Northern Oriole, the BugLady “dissed” the AOU every chance she got, and she likes to think that this grass-roots ridicule was responsible for their re-reinstating the oriole’s historic name. The North American Butterfly Association (NABA) people retained their sanity throughout, and the Baltimore Checkerspot did not suffer a similar identity crisis. 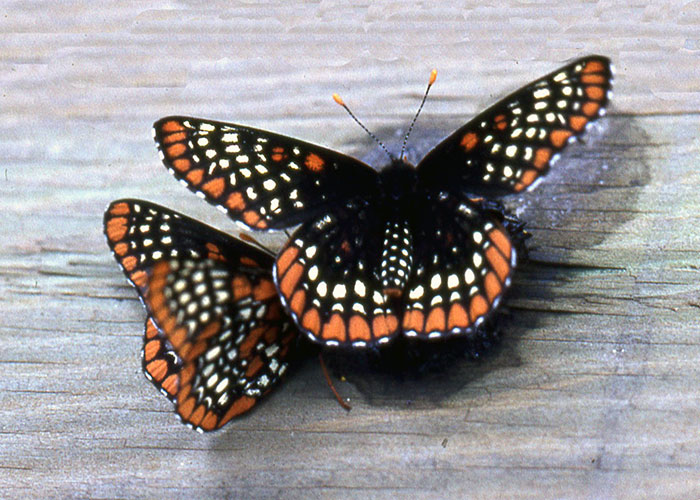 The Baltimore Checkerspot is reputed to be distasteful to predators, so it’s orange and black pattern may be warning coloration. Baltimore caterpillars wear orange and black, too. As far as the BugLady knows, Baltimore orioles taste like chicken, but most of the year, they are birds of the tropical rain forest, where “garish” is commonplace. Although the Brush-foot family contains a lot of strong flyers, one reference observes that the Baltimore’s relatively large body requires it to flap its wings at a comparatively high rate, making it look like it’s struggling from perch to perch.

Kaufman and Eaton, in the Field Guide to the Butterflies of North America, suggest that you might be surprised if you start a “property list” of butterflies and/or moths, and the BugLady recommends adding a phenology component, recording not just what is there but when it’s there. Many adult insects have a 4 to 8 week “flight period,” and it’s fun to record the annual first (and last) sighting of each species. You can also join your local July 4th Butterfly count (check the North American Butterfly Association website) (beginners welcome). It’s Citizen Science that is fun now, and it provides invaluable ecological data later.