The Prairie is a great place to raise a family (predators notwithstanding), and it teems with young bugs almost from the time the plants start growing. Most insects spend the winter as eggs or as pupa; some overwinter as larvae/nymphs and others as adults (in the great scheme of things, few adult insects overwinter). So depending on their species, bugs may be found in any of the life stages when lured from aestivation by the warmth of spring (or in the case of 2012, by the warmth of winter).

A brief digression into vocabulary. When the BugLady took Entomology, more than a few years ago, the terms “nymph” and “naiad” referred to the offspring of insects with Simple or Incomplete Metamorphosis—insects like grasshoppers, aphids, and “true” bugs that hatch out looking like Mom and Dad and just grow, adding a few bits (like wings) along the way. Nymphs were terrestrial and naiads were aquatic. “Larva” referred to the offspring of insects that practice Complete Metamorphosis—insects like flies, bees, beetles and butterflies that go from egg stage to eating stage to resting/changing stage to adult. Larvae were often differentiated by group names like maggots (fly larvae), grubs (beetles) and caterpillars (butterflies). But these terms are not chiseled in stone, and the BugLady has seen dragonfly naiads labeled as both larvae and nymphs (and in Greek mythology, nymphs might dwell on land or in water).

Baby bugs are not sweet and cuddly like, say, Golden Retriever puppies, but they have their own charm. Here are a few of the less-seen prairie babies.

Ambush Bugs are BugLady favorites—she finds them lurking among the flowers or spots a too-still insect dangling from those deadly, hooked claws, being relieved of its innards. Their eyes are bigger than their abdomens, and they routinely catch insects much larger than they are. 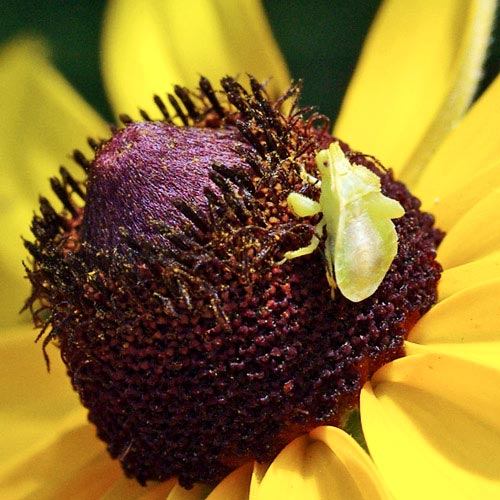 Treehopper Nymphs, like aphids, are “farmed” by some species of ants, which herd them to greener pastures and protect them from predators. In return the ants harvest honeydew from their “livestock.” 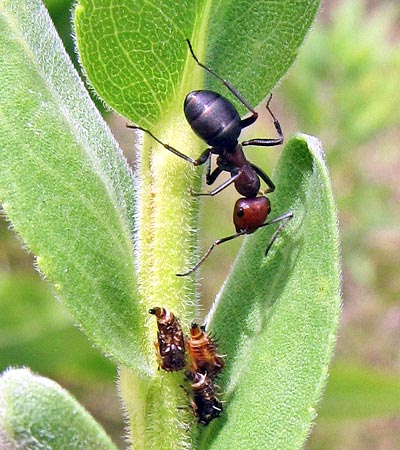 Each time she looks at this Treehopper family, the BugLady is blown away by the resemblance of the young bugs to cicadas, to whom they are distantly related.

Stink bugs are everywhere, and the BugLady loves discovering little clutches of stinkbug eggs, often with their contents walking around on the leaf nearby. She read years ago that vegetarian stinkbugs eat their eggshells, consuming, as they do bacteria that will reside in their gut and allow them to digest cellulose for the rest of their lives. 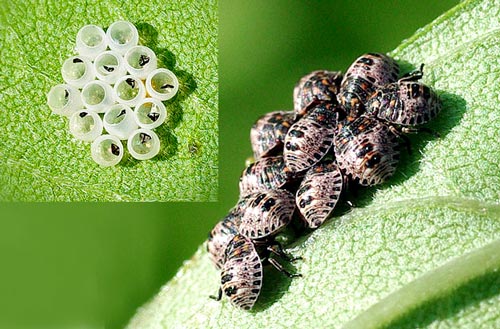 Podisus is a genus of carnivorous brown stinkbugs generically called Spined Soldier Bugs (for the thorn-like spine that sticks out on each side of the adult’s thorax). A common species, Podisus maculiventris, eats notorious critters like Gypsy Moth caterpillars and so is raised and sold as a biological control on unwanted insects. Nymphs may dabble in cannibalism. 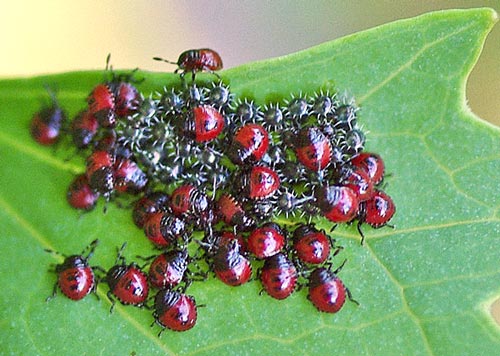 Squash and Leaf-footed Bugs (family Coriedae) are vegetarians, and their numbers include some crop pests. Their secret for survival out on the prairie is odor. In the nymphs, scent glands empty from pores in the top of the thorax; in the adults, the scent pores have migrated to the sides (the dorsal surface of the adult’s thorax being covered by wings). They are targeted by parasitic tachinid fly larvae. 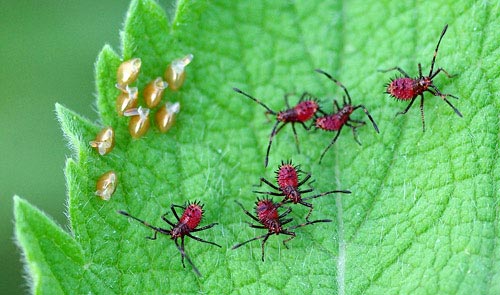 Throughout her entire life, small, gray, menacing-looking Lacewing Nymphs have been dropping from trees onto the BugLady and biting her. These lusty meat-eaters grow up to be the delicate, golden-eyed, but equally carnivorous Green Lacewings. The young of some species of lacewing glue to their backs the empty husks of their meals, further camouflaging them so they may pursue more prey. 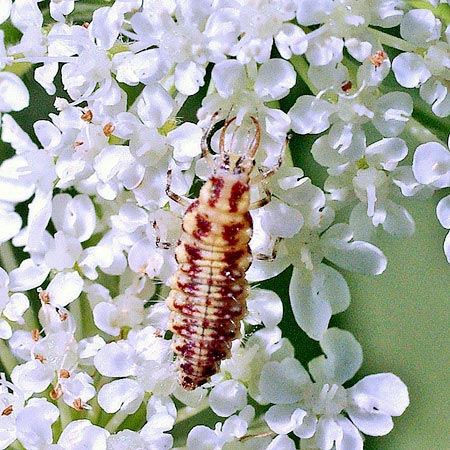 What a little gem this little Bush Katydid is! The rhythmic one-to-three-note ventriloquistic rasping of bush katydids can be heard day and night. Katydids rub the rigid edge of one front wing against a comb-like “file” on the other front wing (when, that is, they finally grow wings). The friction-generated sound is called stridulation. 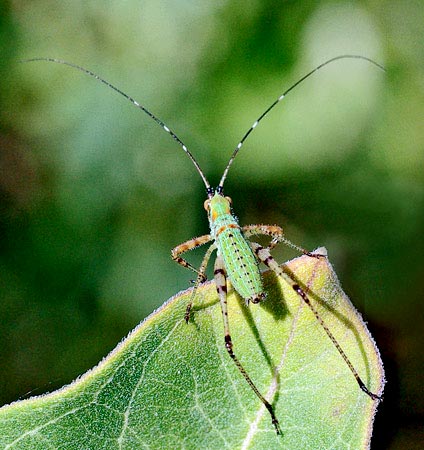 The handsome checkerboard grasshopper looks like a Green-Legged Grasshopper, one of a complex of about a dozen similar species. Short wings are generally a mark of immature grasshoppers, but the wings of adult GLGs never get as long as their abdomen. They overwinter as eggs, develop quickly in spring, and reach adulthood in early summer. 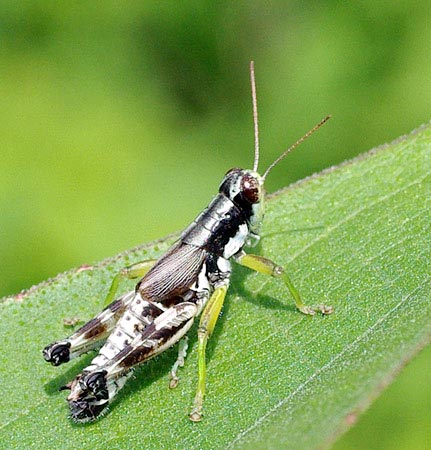 Milkweed Tussock Moths are very social at the beginning of their lives, feeding as a mass of fuzzy, pinkish caterpillars, but they soon become solitary. Tussock moths and monarch caterpillars (of which the BugLady has seen alarmingly few this summer) munch only on milkweed leaves, but the tussock moths favor old, leathery leaves, and monarchs are found on younger growth. 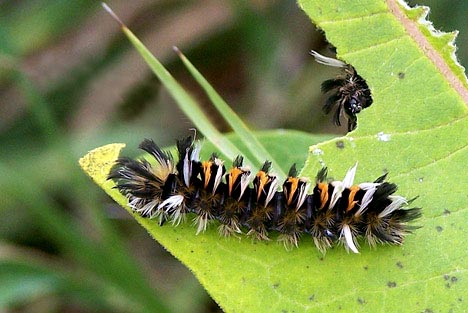 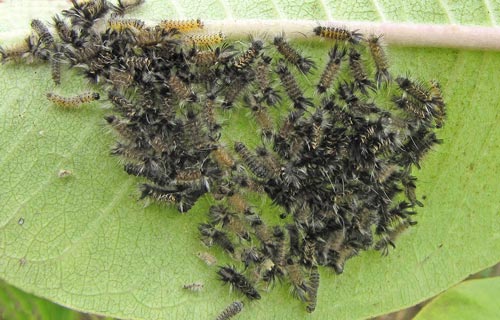 The BugLady’s field sounds like the Second Coming of spring’s nocturnal frog chorus. She and her tin ear have been wading through The Songs of Insects by Elliot and Hershberger (which has dynamite photographs and a CD) and thinks that the loudest singers are tree crickets. Go outside and listen to a grassland.

Bug of the Week Addendum:
BugFan Mike wondered why the BugLady described Milkweed Tussock Moth caterpillars as “pinkish” when they are so clearly, well, not. The orange, black and white caterpillars are sometimes called Harlequin caterpillars, an unusual case where the young insect has a name of its own. They are named, of course, after the brightly-colored dramatic figure from European Renaissance and pre-Renaissance culture. Anyway, it is the mass of first and second instar caterpillars that look slightly pinkish (more-so in real life), but that picture would have overloaded BugFans’ inboxes.
DragonfliesGrasshoppersKatydidsMothsTrue Bugs