Even in a group of damselflies that are called bluets, the Azure Bluet is an amazing color!

Bluets are damselflies in the Narrow-winged/Pond Damselfly family Coenagrionidae, which also includes the dancers, forktails and sprites. Most of Wisconsin’s 20 species of bluets are in the genus Enallagma (the American bluets), and except for two species that apparently didn’t get the memo (Orange and Vesper Bluets), males of most species have various amounts of blue and black on their thorax and abdomen (the front end of a Rainbow Bluet is so exciting that you don’t even notice the rear end). For the sake of identification, bluets are divided visually into three groups. If the abdomen is mainly blue, they’re in the “blue-type bluet” group; if it’s mostly black, they’re “black-type bluets; and if it’s about fifty-fifty, they’re “intermediate-type bluets.” Bluets can be tricky to identify, and hand lens examination may be required.

Females are another story altogether; they’re greenish or tan far more often than blue, and when they are blue, they are less so than males.

Azure Bluets (Enallagma aspersum) are small (about 1 ¼”), black-type bluets. In most bluet species the 8th and 9th segments, at the end of the abdomen, are blue, but the Azure Bluet also has blue on part of the 7th segment. Female Azure Bluets don’t have tan or green forms, and they are almost as blue as males, but instead of a solid blue tip, their abdomen has a pair of “spats” on both segments 8 and 9. Males have large “eyespots” (postocular blue spots) on the back of their heads, and females’ eyespots are smaller.

Bugguide.net tells us that the Azure Bluet has a wide range – “Most of the Eastern United States, also a disjunct population in Montana. In Canada, reported from Ontario, Quebec, New Brunswick, and Nova Scotia.” Within that range it’s found in a variety of (preferably fish-free) shallow lakes, ponds, swamps, bogs, and wetland edges with a lot of vegetation, but it’s pretty adaptable and will colonize gravel pits and man-made ponds. Paulson, in Dragonflies and Damselflies of the East, says that it is “a good disperser, and often is one of the first Odonate species to colonize new aquatic habitat.” It’s not widely distributed in Wisconsin; Bob DuBois, in the excellent Damselflies of the North Woods calls it “local in our region, but may be abundant once found.” It’s a “Most Wanted” species in Wisconsin.

With a few minor twists and turns, the life history of an Azure Bluet mirrors that of any bluet. Males hang out along the shore chasing rival males away from good egg-laying spots and waiting for females, which don’t approach the water until they are reproductively ready. After mating, they fly in tandem, looking for a suitable spot for her to oviposit. The period between mating and ovipositing can be dicey – rival males are ready to pirate the lady – so the male retains his grip on the back of her head (contact guarding). 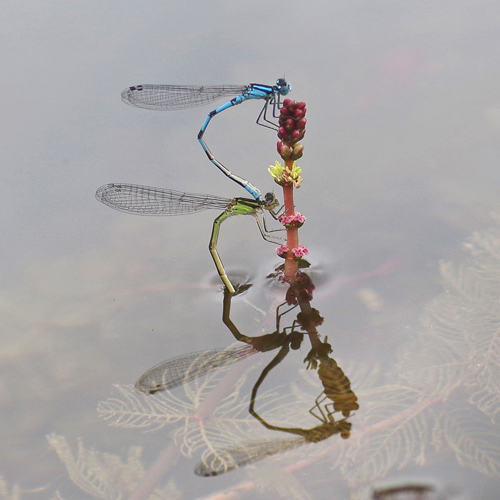 After mating, a typical female bluet perches on a favorable stem at the surface and backs down the plant stem, inserting eggs into it as she goes (see the photo above of a pair of Marsh Bluets); if she submerges, the male releases her. Female Azure Bluets take the bull by the horns, find a good piece of vegetation, and march down it headfirst to oviposit near the base of the plant. She may descend more than a foot below the surface and stay under for 15 or 20 minutes (she turns gray while she’s down there, according to Paulson). It is theorized that this will allow her eggs to survive the drop in water level caused by a summer drought. The male waits for her above-decks and reclaims her, but she’s no longer interested.

Like other damselflies, the immatures (naiads) are aquatic. Here’s a picture of a just-emerged Azure Bluet. They are carnivores as adults and naiads.

An Azure Bluet’s amazing color is all the more amazing because no blue pigment exists in bugs (or vertebrates, either). Before the advent of eyes (about 600,000,000 years ago) color didn’t matter. The world was far from black and white – animals get some of their pigments in the foods they eat, so there probably was color in that dark world – but its appearance was unappreciated. It was only AE (After Eyes) that color mattered. Which gave rise to one of the BugLady’s favorite quotes:

The eye of the trilobite tells us that the sun shone on the old beach where he lived; for there is nothing in Nature without a purpose, and when so complicated an organ was made to receive the light, there must have been light to enter it.” (Louis Agassiz, Professor of Zoology, Harvard, 1870).

For better or worse, color makes its wearer conspicuous, which can be desirable (courtship displays or warning coloration) or undesirable (red sea slug on green kelp – oops!). Lots of colors come from dietary pigments – flamingoes are pink because of a carotenoids that they get from the tiny crustaceans they eat. Blue is tough to glean from dietary pigments. It’s a structural color, formed when light reflects off of tiny structures within the layers of the cuticle, an arrangement that bounces blue light back at the beholder. The intensity of the blue can vary depending on the amount of light and the angle of the viewer.

Click here to find out more about this arrangement. For a deeper, more technical dive, try this one.

Up until the third week of January, we were having “Winter Lite” here in God’s Country. Since then we’ve had snow, more snow, a visit from the Polar Vortex, ice, and even more snow. We haven’t had a long winter, but at the risk of sounding like wimps, we’re ready to start that slow climb toward spring (the BugLady heard a Cardinal singing the other day). In that spirit, she offers this quote from Canadian broadcaster, reporter, and writer Peter Gzowski: “We need spring. We need it desperately, and, usually, we need it before God is willing to give it to us.”