Seasoned BugFans rejoice! A moth that you can actually see with your naked eye! The Azalea Sphinx is a member of the Sphinx family, Sphingidae—Sphinx moths have appeared in these pages before, in the person of the White-lined, the Pandorus, the Laurel/Fawn, the Waved, the Walnut, the Five-lined, and the Hog/Virginia creeper sphinxes, as well as the Cinnamon and Bumblebee/snowberry Clearwings. Sphinx caterpillars are called hornworms for obvious reasons, though in some species, the horn is lost or reduced in their last instar.

Sphinx moth caterpillars are frequently associated with one, or a small group of host plants, for which they are often named (tobacco and tomato hornworms, big poplar, wild cherry, huckleberry, catalpa sphinx, etc.). Some are pests of agricultural or horticultural plantings, and they may have different names than their adults (when it grows up, a tomato hornworm becomes a Five-lined sphinx). The caterpillars are responsible for the name Sphinx—when alarmed, they raise the front half of their body, retract their head like a turtle and pose like an upside-down Egyptian sphinx (OK—so entomologists are an imaginative bunch). Adults may be called Hawk moths (especially in England) and hummingbird moths (for their feeding style). 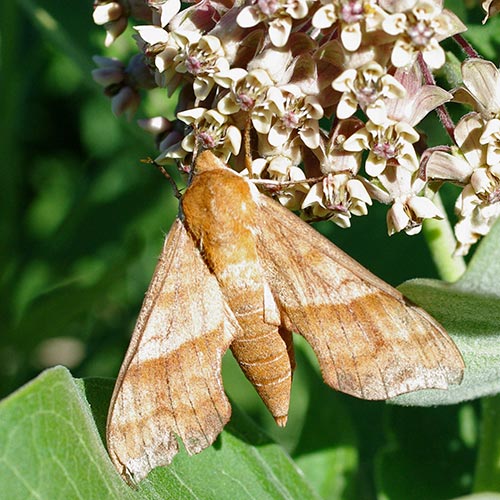 These are big moths—some tropical species may have a seven inch wingspread. North American sphinx moths, some of which may have four inch wingspreads, represent about one-tenth of the approximately 1,500 species worldwide. They have chunky, scaly, spindle-shaped bodies and long, roughly triangular wings; the wings of some species are decorated with color-blocks. Many adults have strikingly-colored hind wings or abdomens that are concealed when they are at rest but are flashed in flight to startle predators. Sphinx moths are terrific flyers; their rapid wing beats can carry them up to 12 mph, and they can also hover.

In spite of the fact that adults communicate using airborne chemicals (pheromones) they don’t have especially feathery antennae (she calls to him using pheromones, and in some species, he responds with pheromones of his own when he gets close). Although many are night-flyers, they have no hearing organs/bat detectors.

The caterpillars can be sizable, too. Some are cryptically colored, but others have a line of big, attention-getting spots along their sides. The caterpillars of closely-related species can be hard to tell apart because they may come in different color phases, but apparently, the size, shape and color of the horn can be diagnostic. Caterpillars turn darker as they approach pupation, and they overwinter as pupae.

The Azalea Sphinx (Darapsa choerilus) (formerly Darapsa pholus) is one of three species in its genus in the Nearctic ecozone and is found in deciduous woodlands and edges from the Great Plains, east. Wagner, in Caterpillars of Eastern North America, says that the three Darapsas (the Azalea, the Hydrangea, and the Virginia creeper sphinx) “usually can be identified by their foodplant associations.” Both the adult Azalea sphinx and its larva are similar to the related Hog sphinx, but the Azalea sphinx’s horn is straighter and bluer.

Because of its more-catholic-than-usual diet, the Azalea sphinx could also be called the Blueberry, Sour gum, or Viburnum sphinx, (multiple sources continued “and other host plant families” but didn’t name them). Adults nectar on a variety of flowers, tubular and not, that are open during the evening and at night, like honeysuckle, bladder campion, Eupatorium, Spiraea and, apparently, milkweed.

There are probably two generations each summer here in Wisconsin (possibly eight per year along the Gulf Coast). The young are solitary feeders that snug up against the midrib of the leaf they’re eating when at rest. When they’re ready to pupate, they use silk to fasten a few leaves together loosely on the ground.

Gratuitous caterpillar picture that the BugLady wishes she had taken: http://bugguide.net/node/view/996714.

Unrelated Nature Note: Although the temperatures have been in the single digits above and below zero for a few days, one BugFan has had two Yellow-rumped Warblers at her feeder. Warblers are a largely insectivorous lot, so 99.99 of them departed for warmer climes a few months ago. The Yellow-rumped is the hardiest because it will supplement its diet with berries (the BugLady still clings to their old name, Myrtle Warbler, because the early settlers observed these birds feeding in myrtle bushes along the seacoast).