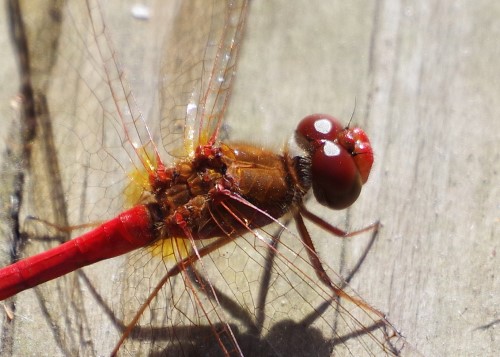 We’ve just had an all-too-brief Indian Summer – it got warm enough for the flies to fly, the tree crickets to sing, and yes, for a few very late Monarch butterflies to drift past on their big journey. The BugLady spent some time on boardwalks in wetlands, enjoying the last dragonflies of the year.

Meadowhawks, in the Skimmer family Libellulidae, are a genus of 15 species, nine of which have been recorded in Wisconsin. They can be tricky to identify (understatement). They start to appear in late June/early July and are with us for the rest of the summer and well into fall, but other than a few tenacious White-faced Meadowhawks, the final meadowhawk on the scene is the Autumn Meadowhawk (called the Yellow-legged Meadowhawk in older field guides) (the BugLady thinks that their legs are flesh-colored, rather than yellow, but she can see why that name would be a non-starter). Here’s an early BOTW about meadowhawks.

Autumn Meadowhawks (Sympetrum vicinum) can be found in Southern Canada and much of the US, except for the northern Rockies, the arid Southwest, and a few of the Gulf States. Some meadowhawks are picky about habitat, but not Autumn Meadowhawks, which are equally happy in shallow, permanent ponds, lakes, marshes and swamps, bogs, flooded meadows, and even slow-moving streams, especially if there are woodlands nearby. 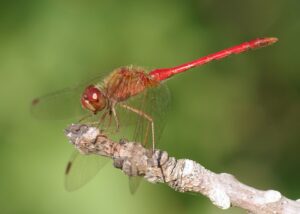 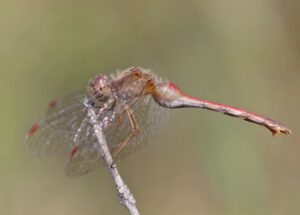 This is a pretty small/small, pretty dragonfly, only about an inch-and-a-quarter long. Mature males are red – often cherry red – and females and immature males start out yellow and then turn red and tan. Females have a prominent egg spout below the end of their abdomen.

Along with the mosaic darners, Autumn Meadowhawks are the last dragonflies to emerge, and once they do, they spend more time than most dragonflies do away from the water. The “Dragonflies of Northern Virginia” website paints this picture, “Autumns can actually be abundant at times. Hundreds of golden tenerals rise out of shallow wetlands in early summer, and bright red adults fill the same wetlands in fall.” Large-scale emergences start at marshy pools in June, at which point juveniles take to the woods and grow up in sunny woodland clearings. They don’t seem to reappear at ponds and marshes until fall, often staying quite late into the season, hence their name.” 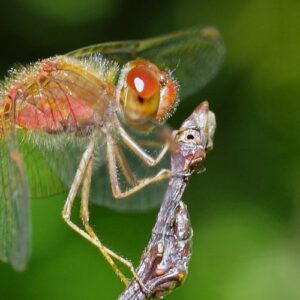 Meadowhawks can be very common from mid-summer on, yet the BugLady rarely sees them at the waterfront with the other dragonflies. Several meadowhawk species do oviposit into shallow water with emergent vegetation, but others have different ideas about where to leave their eggs. White-faced Meadowhawks gamble, bobbing up and down in tandem as the female drops eggs onto the ground in a dry pond basin or on an edge that might be underwater by spring. 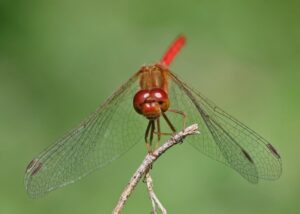 In many dragonfly species, mature males patrol the shoreline and beat their figurative chests, waiting for females to arrive; females come to the water only when they’re reproductively ready. Autumn Meadowhawks finish their development away from water, and by the time they get back to it, they have already found a female and are flying in tandem. Legler, in Dragonflies of Wisconsin (aka “The Bible”) says that “the sexes form tandem pairs in midday, away from the water, then fly to water where they make dipping motions imitating oviposition. They then mate and proceed to lay eggs while pair is in tandem. Female trails and she will have mud on end of abdomen because she alternately strikes water surface and muddy stream bank or grassy area above the water line. Eggs are deposited in mud or wet moss. She alternately dips abdomen in water probably to clear the egg spout. Eggs will survive the winter and hatch during rains and high water the next spring.”

Unlike many other dragonflies, male Autumn Meadowhawks don’t defend territories along the shore, and, possibly because they aren’t territorial, they are unusually tolerant of other Autumn Meadowhawks. Legler says that “Ovipositing by one pair attracts other pairs to same site for ovipositing.”

The eggs hatch when (if) they’re inundated by water the following spring, as the water heats up to 50 degrees. The naiads eat and grow and shed for six or seven weeks, emerging as adults at night in August or September. They may fly into November if there isn’t a hard freeze; this they can do because they collect heat by basking in the sun and by sitting on warm rocks (Sympetrum means “with rock”). With this boost, they are able to fly even when the temperature dips to 50 degrees F.

They routinely perch higher off the ground than other meadowhawks, but on cooler days, they’re found on the ground.

Adults feed on small, soft-bodied invertebrates that they spot from a perch and then fly out and “hawk” from the air (one source said that their pursuits are successful 97% of the time). The aquatic naiads, called “sprawlers,” hunt from concealment and grab a meal (fly larvae, daphnia, tiny fish, tadpoles, and smaller dragonflies) as it swims/walks past (nice video, but, no, never “larvae”).

Both above and below the water’s surface, Autumn Meadowhawks have an important place in the food web, both as eaters and eatees. They’re food for ducks and other birds, fish (one source said that largemouth bass pick off ovipositing pairs from below), frogs, crayfish, mantises, and other dragonflies. Another source reported that a snake that bites a naiad may get bitten back hard enough to convince it to drop its prey (and that the naiad may make sounds to startle predators). With populations that peak as migration begins, Autumn Meadowhawks supply important fuel to southbound birds.

Artist-in-Residence at the Field Station