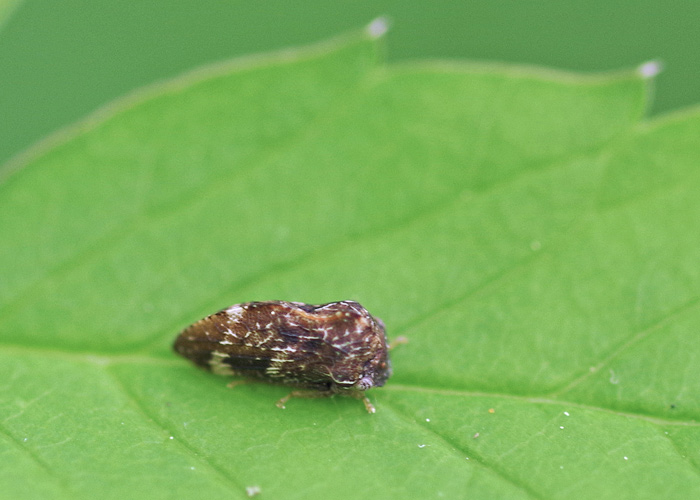 One of the things that the BugLady looks for as she skulks around in the underbrush is interactions between ants and other insects. These are generally food-related – either a bunch of ants is carting a dead bug home, or they are satisfying their need for honeydew, a summertime, carbohydrate-rich specialty. Aphids are a common source of honeydew because they must ingest a huge amount of dilute plant sap in order to fuel their activities, and the excess has to go somewhere, so it exits to the rear of the aphid. Ants will “farm” herds of the docile aphids, protecting them from ladybugs and harvesting the sweet liquid in a win-win ecological relationship called mutualism.

Another source of honeydew is treehoppers, which look kind of like lumbering bison compared to aphids. They are “true bugs” in the treehopper family Membracidae, some of which look dragon-like as nymphs and thorn-like as adults. There are more than 3,000 species of treehoppers, and they live everywhere except Antarctica. 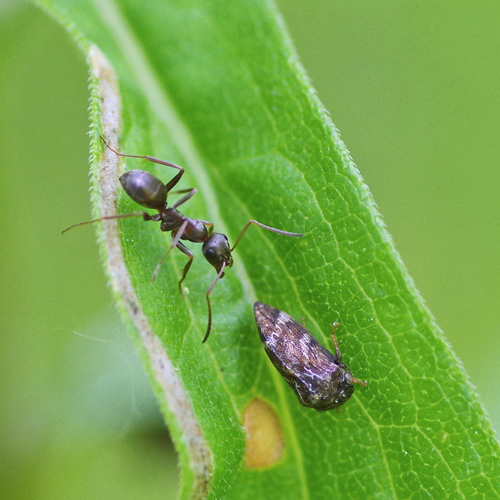 Aster treehoppers (Publilia concava) are found in the eastern half of North America. The BugLady usually sees them on goldenrods, but they can also be found on several other species in the Aster family, and the (winged) adults may move to woody plants. According to Wikipedia, nymphs:

Unlike many insects, Aster treehoppers overwinter as adults, not as nymphs or eggs, in leaf litter below their host plants. Males woo their ladies in spring with (inaudible to us) courtship calls that they generate by sending vibrations through the substrate. Aster treehoppers also use vibrations to tell their confreres about good feeding spots and to alert their guardian ants to the presence of predators. Studies have shown that Aster treehoppers will signal their protectors when ladybugs show up, and the ants will respond, and that the ants get excited when recorded treehopper alarm signals are played to them. Aster treehoppers also have alarm pheromones that they activate when predators arrive, but scientists aren’t sure if that chemical message is received by the ants or is restricted to their fellow treehoppers. 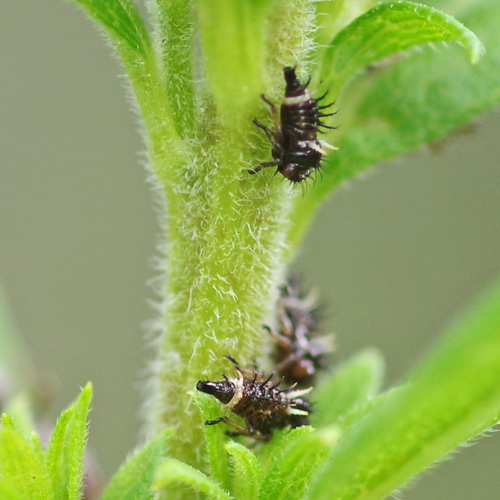 Females partially insert their eggs into the stem or into the underside of a leaf on either side of a leaf’s midrib so that newly-hatched nymphs don’t have to travel far to tap into food, and she’s more likely to lay eggs if guardian ants are around. Females watch over their egg clusters until the eggs hatch, and then, although they may stay on the scene (this is a gregarious species), they hand off the child care to the ants. If Mom is present and caring for her offspring, ants are more likely to step in, but if there are no ants around, Mom only lays one clutch of eggs and stays with her young. One study showed that if ants are removed from their herd of treehopper nymphs, it can decrease nymphal survival by 20 times.

Aster treehoppers are one of the treehopper species in which Mom may leave her eggs in the egg cluster of another female and move on (brood parasitism). The adoptive Mom cares for her foster eggs, and the “parasitic” Mom goes on to lay more clutches elsewhere. 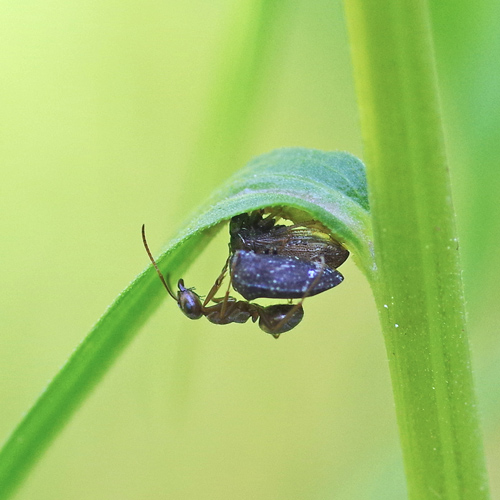 Ants have “choices,” too – they are more likely to guard treehoppers when the quantity and quality of the honeydew meets their specifications and when the population of treehoppers is sufficiently dense and is near to their ant mound.

Ants in the genus Formica (accent on the first syllable) will take on goldenrod-defoliating Goldenrod leaf beetles – especially the beetle larvae, which the ants bite and spray with formic acid to encourage them to move on. This benefits both their flock and the goldenrod plant (the sap-sucking treehoppers aren’t beneficial to the plant, either, but at least they don’t eat the leaves). Ants that habitually clear the tops of their mounds to prevent shading may forgo that task if it interferes with their treehoppers.