Spring is coming, and home gardeners have had a gleam in their eyes ever since the first seed catalog landed in the mailbox. Sheaves of asparagus shiver on beds of ice in grocery stores, and foragers are anxious for those first stalks of “volunteer” asparagus to peek up along the roadsides. They’re not the only ones who are waiting.

The “what” and the “when” of their feeding makes the common asparagus beetle the less welcome of the two. Both chew on asparagus spears, which can cause stunting and other cosmetic damage that make the asparagus unmarketable (and consumers don’t enjoy picking up a spear with a bunch of eggs glued to it or a smear of frass (bug poop) on it, either).

Both species overwinter as adults in hollow asparagus stems, or under leaf litter, garden debris, or loose bark—that way, when the sun warms the soil and the asparagus spears poke their heads up in spring, the beetles are already in the neighborhood. The common asparagus beetle is the first to wake up, and it also feeds on the lacy leaves, which can defoliate and weaken the plant, a perennial (no leaves = no photosynthesis = no food storage) and can make it susceptible to fungal infections. Its larvae also eat the spears and leaves. 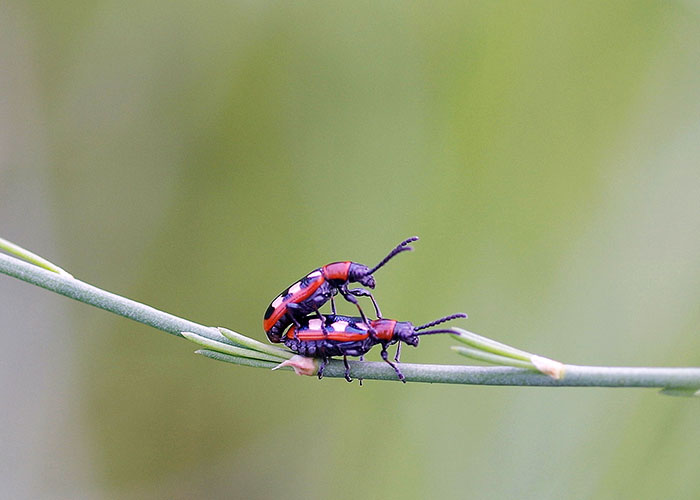 After some fun in the sun, the common asparagus beetle lays its eggs in rows of 3 to 8 on the new spears, leaves or flower buds. There’s not much of a courtship, but she may parry his moves by turning her abdomen aside or by kicking. To protect their genetic investment, males guard females after mating, remaining piggyback during ovipositing. Female Chrysomelids have the ability to favor the sperm of a suitor by keeping eggs fertilized by a male if they like the cut of his jib and ejecting the sperm of previous males. The young hatch within a week and start feeding. There may be two generations of common asparagus beetles each summer here in God’s Country, and up to five generations a year where the growing season is longer.

The 12-spotted gets out of the gate a little later in spring, and it also eats the spears and leaves, but its larvae concentrate on the fruits and don’t damage the plant (not a problem unless you raise asparagus for seed, and most growers don’t—they’re in it for the vegetable and they cultivate higher-yield, (seedless) male plants). It lays one egg at a time on the leaves; the larvae hatch, head for the fruits, and burrow inside. There are two generations per year, and they generally finish their life cycle by mid-summer. The larvae of both species pupate in cocoons in the soil. 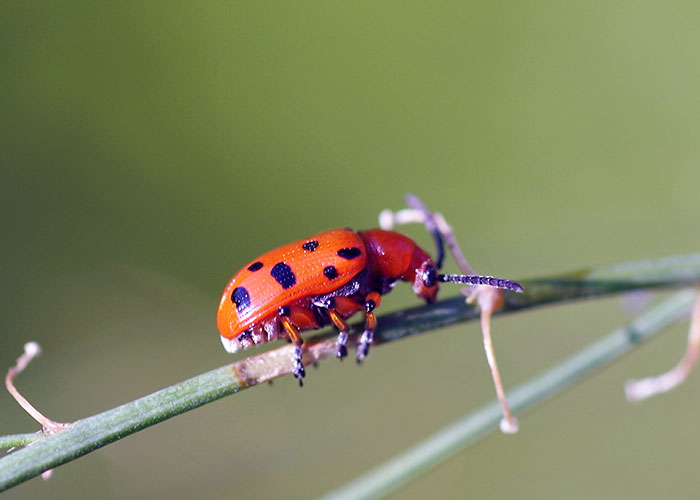 What eats asparagus beetles? Ladybugs, ground beetles, wasps, flies, predaceous stinkbugs, dragon and damselflies, damsel bugs, lacewings, and a variety of birds including farmyard fowl. Its most efficient predator seems to be a small, blue-black wasp, Tetrastichus asparagi, that is a parasitoid of the beetle larvae and that must develop a taste for them, because as an adult, it eats the egg masses. One study in Massachusetts showed the wasp demolishing a hefty 50% of beetle eggs in an area and then parasitizing half of the remaining eggs. It uses its antennae and/or ovipositor to detect hosts that are already parasitized and doesn’t waste its time on them, and it targets only the common asparagus beetle (alas for the 12-spotted; a different species in the wasp’s genus goes after them).

What does an asparagus beetle do when it’s alarmed? Common asparagus beetles have several arrows in their quivers. They may scoot over and hide on the other side of the stalk, may do the classic Chrysomelid drop to the ground, or may resort to secretions from defensive glands. The 12-spotted beetles escape by flight. Both species use stridulation—making noise by rubbing two body parts together (in the case of asparagus beetles, a part of the abdominal exoskeleton rubs against teeth on the hard wing covers), both to scare predators and to communicate with other beetles.