The BugLady heard a funny sound while she was reading the other night, the kind of small thunk, thunk, thunk that made her wonder if there might be a small leak in the roof. After a little reconnoitering (and, mercifully, dry fingers) she traced the sound to a ladybug that was bouncing off of the inside of the lampshade by her chair. First (live) Multicolored Asian ladybug of the year. 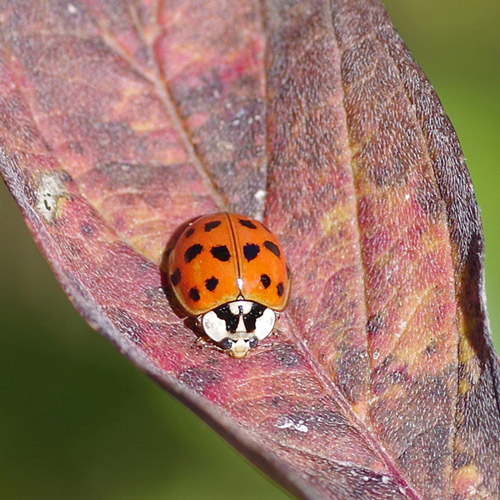 Please enjoy this rerun of an episode from a few years ago – some new words and new pictures.

“We didn’t do it,” say the websites of Departments of Natural Resources in a number of states, trying to make it very clear that they are NOT releasing Asian ladybugs in order to feed Wild Turkeys. In fact, a Kentucky site declares emphatically that the state of Kentucky has never released them, but points a finger at neighbors to their South who have. (In Wisconsin, the rumor is that the DNR stocks rattlesnakes to control turkeys – also false, on so many levels).

Multicolored Asian ladybugs (Harmonia axyridis) need no introduction – they’ve been around for a century (but especially for the last 30 years), and we know them by many names – Southern, Japanese, Harlequin, Halloween, and Pumpkin beetles, plus Aziatisch lieveheersbeestje (Holland), Asiatischer Marienkafer (Germany), and in Britain, jokingly, the Many-named ladybug. Plus a few words that wouldn’t get past the censors. The BugLady is intrigued by the genus name, Harmonia (which the beetle shares with a plant) but could find no explanation for it. There are three Harmonia beetle species on our continent; all are introduced and well-established, and the Multicolored Asian ladybug is the most widely distributed. 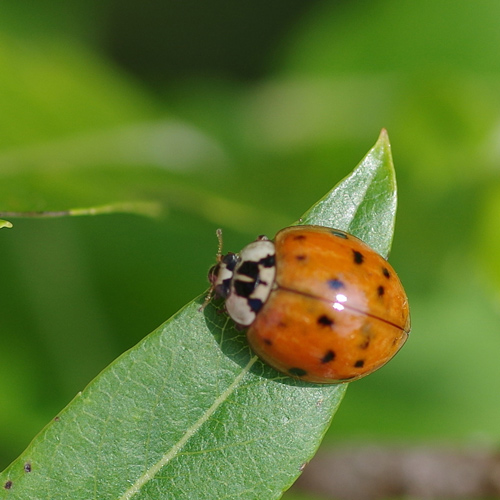 The name “ladybug” is, of course, a bit misleading, since these are beetles (Coleoptera), not True bugs (Hemiptera), so “ladybird beetle” is more accurate. There are close to 500 North American species in the ladybird beetle family (Coccinellidae) (from the Latin “coccinus” (scarlet) which comes from the Greek “kokkos” (berry)), and many of their lifestyles are similar. See this 2012 BOTW to find out more about the natural history of ladybugs.

There’s some discussion about when and how the Asian ladybug was finally established in North America. It was brought to California in 1916 to control aphids but died off, was reintroduced there in 1964 and 1965, and it was released in a dozen Southern and Atlantic Seaboard states plus Nova Scotia between 1978 and1982. Each time, it did its job for a season or two, but then failed to thrive. A number of sources cite a release in Louisiana in 1988 as the one that “took,” and the beetle subsequently traveled to almost all corners of the continent under its own steam (apparently, it doesn’t like the far, northern Rockies). The alternate theory is that the successful colonizers arrived without fanfare in the Ports of New Orleans and Seattle and seeded themselves. Whatever the truth, the Asian ladybug became common in the Midwest about 20 years ago, in the Northeast 25 years ago, and in the Northwest 30 years ago, and its numbers have grown considerably beyond “abundant.” The Audubon Society Field Guide to North American Insects and Spiders, published in 1980, does not mention it at all! 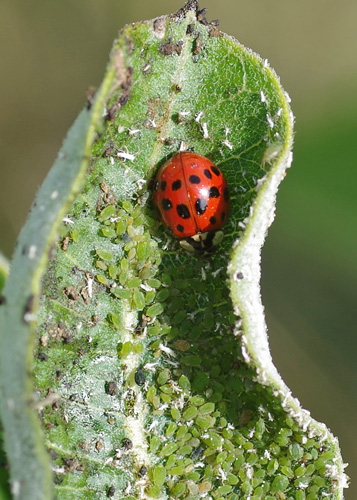 On its home turf in the Far East, the Asian Ladybug feeds in forest and orchard trees, eating aphids (50 to 60 per day, say some sources, and up to 5,000 in a lifetime), and a few other small, soft insects, plus insect eggs, and it was deployed against soybean aphids in Japan (both the adults and the larvae are carnivores). Those same soybean aphids, immigrants from Japan, made their first North American appearance – in Wisconsin, in fact – in 2000. In the US, the beetle is used to control aphids in orchards (it’s very important to the pecan harvest), on roses and other ornamentals, and on agricultural crops including soybeans, alfalfa, corn, and tobacco, lessening the need for insecticides. It also has a fondness for native lady beetles, and in fall, the Asian ladybug may be omnivorous.

The predators that kept their numbers in check in Asia were left far, far behind, and other than a few parasitic wasps, almost nothing goes after Asian ladybugs here. Their red/red-and-black colors tell birds and other potential predators to think twice. What are they advertising? Along with some other beetles like lightning and soldier beetles, ladybugs ooze hemolymph (the insect equivalent of blood) that contains a bad-smelling, bad tasting chemical from their leg joints in order to discourage predators (it’s called reflex bleeding). The chemical occurs in higher concentrations in the hemolymph of Asian beetles than it does in native beetles, and the Asian ladybug also manufactures a designer chemical called harmonine, which is antimicrobial. 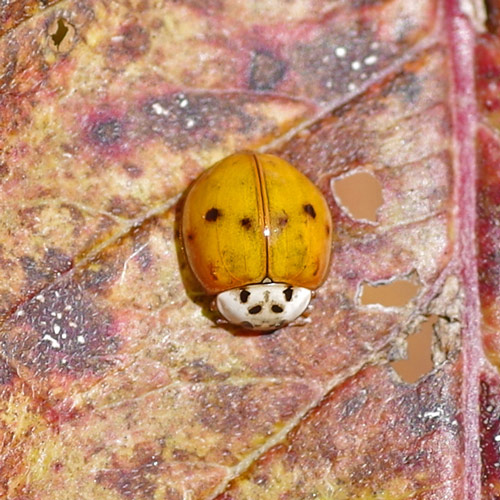 At 5 mm to 8 mm long (9/32”), the Asian ladybug is a bit larger than its native cousins. There are at least 16 different color phases, from red to orange to utterly plain to densely-spotted (one source said that a beetle with lots of spots is more likely to be a female). They have reddish-brown legs, and most individuals have a black “letter” on the prothorax (the first of the three segments of the thorax) – either an “M” or a “W,” depending whether the beetle is coming or going. The larva is likened to a tiny, spiny alligator. In good weather with plentiful food it takes about a month to grow from egg to adult, and there are several generations per summer. They overwinter as unmated adults – in Asia, they seek out crevices in tall, sunny, light-colored rock faces. 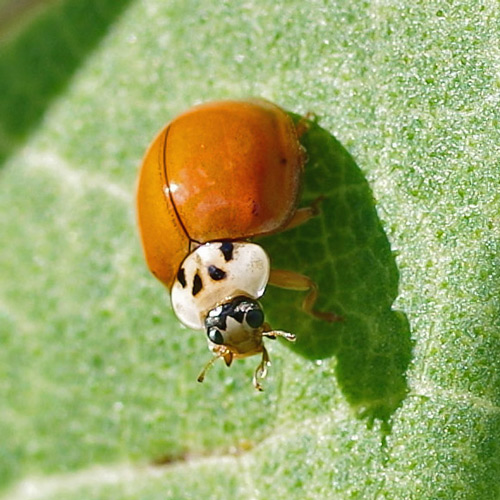 So – granted that this exotic beetle does a really good job of controlling equally exotic aphids on important crops, is there another side of the coin? Let’s unpack a few sentences from the preceding narrative. 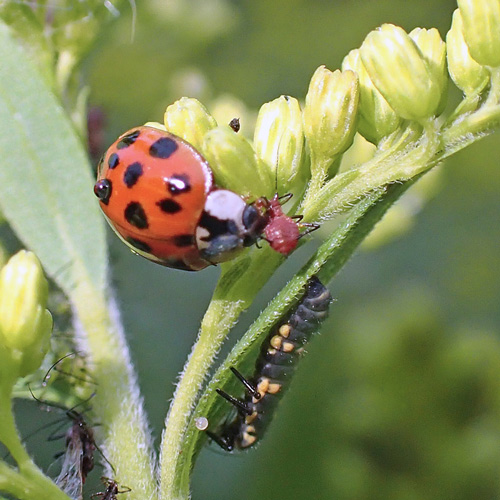 “In fall, the ladybug may be omnivorous.” And it especially likes to feed on sugary, ripening grapes, usually taking advantage of an opening in the fruit made by a bird or wasp. The beetles get caught up in the harvest and pressed with the grapes, and whole batches of wine and grape juice have been tossed – even recalled from stores – due to the subsequent “ladybug bouquet.”

“They overwinter as unmated adults.” A few sites call it a “Home Invasion.” On warm, sunny days right after the first crisp days of fall, they look for those ancestral crevices in those ancestral light-colored cliffs and find –-the sunny sides of light-colored buildings that are insufficiently sealed, allowing entry. They just want to be warm and dormant all winter, and then they want to leave in spring. They don’t breed or chew on the houseplants or carpets or the dog or the dog food or the floor joists – in fact, they (allegedly) don’t feed at all. The BugLady’s not so sure about the no-eating part because she finds them in the compost bucket and around the sticky rim of the honey jar, but maybe hers just haven’t settled down to the ascetic life yet. 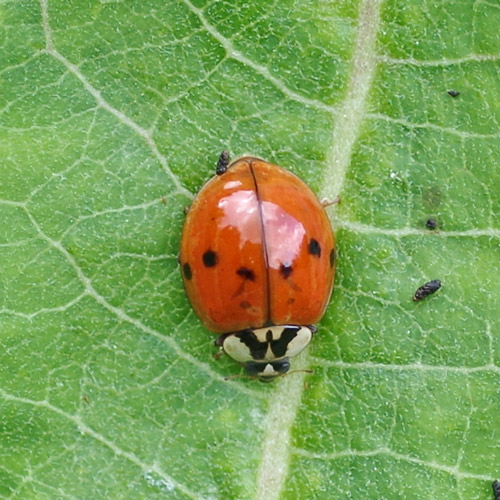 Sometimes there are astronomical numbers of the things. They swarm. It literally “rains beetles.” They gather by the thousands in attics and walls. Ladybugs use a chemical attractant called an aggregation pheromone to summon a crowd, and that pheromone persists, guiding future generations to the spot. Their hemolymph stains surfaces and their odor persists – one source describes it as the sour smell of rotting leaves (this will get us ready for the Brown marmorated stinkbug, though).

Other than the odd nip, they don’t injure humans (Cowboy up, BugFans – their “jaws” are tiny and your skin is tough), though some people are allergic to them. One sufferer, then the head of the Entomology department at a Kentucky university, reported runny eyes and clogged sinuses after contacting the hemolymph; other people experience asthma or contact dermatitis. 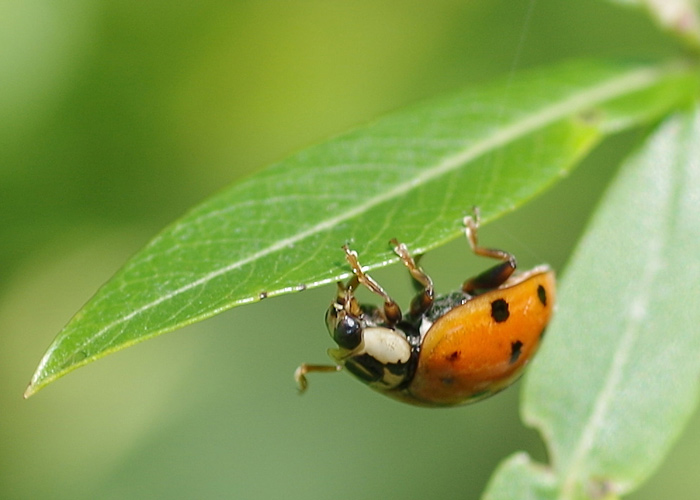 Ladybugs are for sale in garden stores and websites (there are elaborate instructions about preparing the garden so that the ladybugs don’t fly away home). Although some sites don’t say which species they’re supplying, most sell the native Convergent ladybug (Hippodamia convergens) which are captured in the wild in their winter aggregations.

DNA studies tell us that Asian ladybugs in America were introduced from Asia, but Asian ladybugs in Africa, South America, and Europe came from eastern North America! The United Kingdom’s Ladybird Survey laments that “Despite the American experience, the animal was also released into Italy and elsewhere in Europe.” It’s been spotted in England, and the word is out to monitor native UK species. Humans are, indeed, slow learners.