Like bees, wasps, horntails and sawflies, ants are in the order Hymenoptera (membranous wings). Hymenopterans have been around for about 200 million years, and ants, which developed from wasps, for about 90 million years, give or take. They are most numerous and diverse in the tropics. Elizabeth Lawlor, in Discover Nature around the House, (an excellent series) says that E. O. Wilson found 43 species of ants living in a single tree in Peru (which is more then the total number of species in Great Britain), and that only three species live in the Arctic above the tree line. They are considered by some to be at the pinnacle of insect evolution and to be the most numerous of all insects (and, it is said, if all the world’s humans sat on one side of a cosmic teeter-totter and all the ants sat on the other, the humans’ feet would be dangling). There is a huge amount of information available about ants, and what follows is only a quick overview. 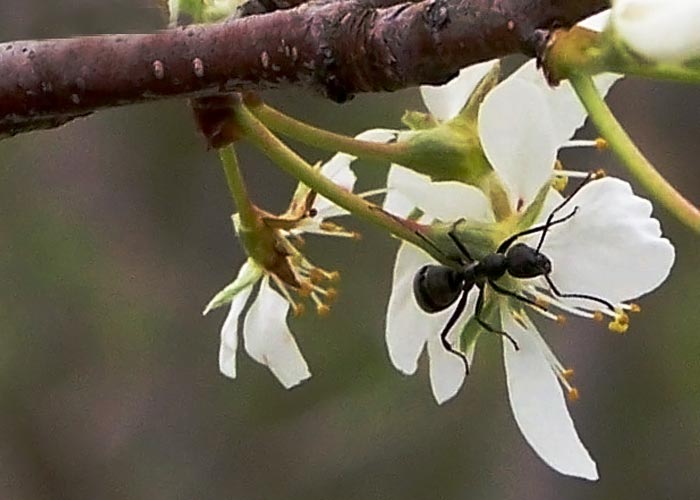 Although many hymenopterans are solitary, the order is famous for housing the social insects, and all/nearly all species in the ant family are social. Most colonies operate with a caste system that includes a queen (a fertile female that mates only once and then retires to lay eggs, read romance novels and eat chocolates for the rest of her life, which may span up to 15 years), workers (sterile, wingless females who care for the queen, eggs, and larvae, maintain and defend the colony, and forage for food), and males. Nuptial flights in spring and fall mark the only time ants may be winged (and then, only the Royal ants); after mating the male dies, and the young queen bites/scrapes off her wings and starts her own anthill. She cares for the first crop of workers, feeding them saliva and eggs, until (Moms take note) they get old enough to care for her forevermore. 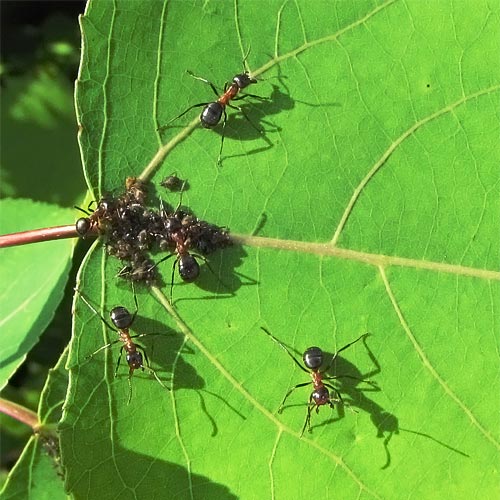 Nests are generally (but not exclusively) excavated in the ground or in rotting trees, and some ants take advantage of the solar-heated microclimate that exists under a rock. Other (larger) ant mounds are created when ants bring in materials from the surrounding area, forming a slightly domed mound and then tunnel through it—the domed shape facilitates heat absorption. Ants are active a good part of the year; the picture of the ant on the plum blossom was taken in early May and the group shot on the orange, in early November. In the winter, ants can migrate vertically, and live below the frost line. 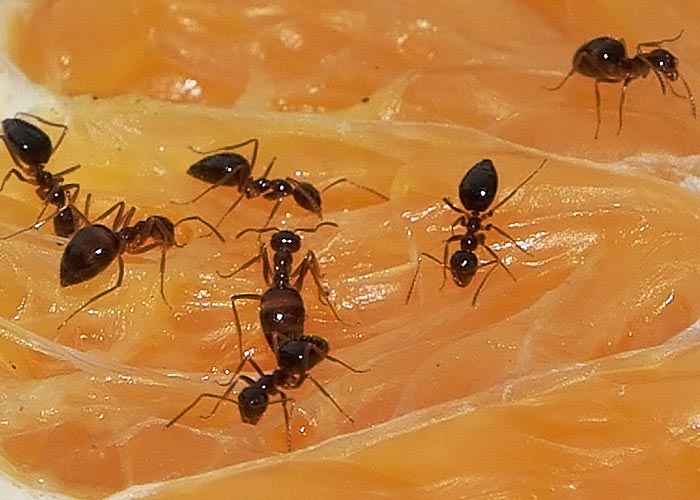 Each nest/colony/hive has an individual scent, a combination of chemical secretions and of the scent of the colony’s nesting material; this allows its members to identify their sisters at home or away. These chemicals also, according to Lawlor, “cause the workers to respond and maintain cooperative and altruistic behavior.” When workers meet, they feel each other with their antennae and then feed each other a bit of food, which strengthens the bond of the colony. Foraging ants may find their way to a food source and then back home by following both a chemical/pheromone trail (rubbing your finger across a chemical trail causes the ants temporary confusion) or by visual landmarks, and an ant deposited off-trail is in trouble. Each segment of an ant’s antennae has a different sensory task; read Lawlor.

In T.H. White’s terrific Arthurian tale, The Once and Future King, young Arthur’s lessons include being turned by Merlin into a variety of animals, including an ant, and the ant-lessons are powerful and memorable. 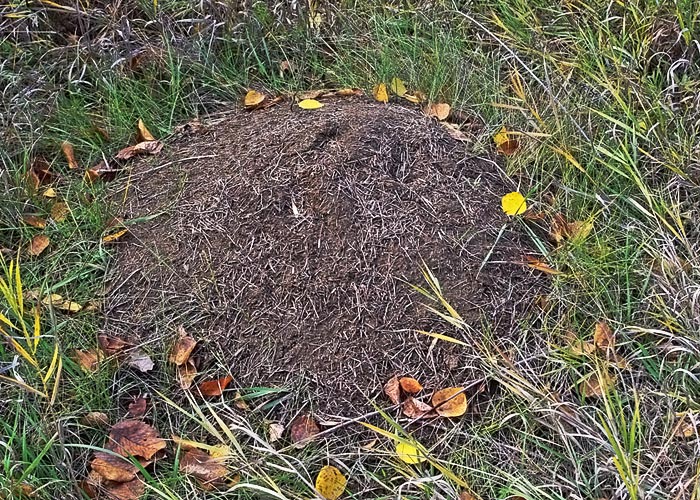 Ants enroll in a wide variety of food plans, depending on their species. They consume nectar and other plant juices, and honeydew “milked” from herds of Homopterans. They gather seeds (ants disperse the seeds of many kinds of plants), leaves, and flowers, and eat dead organic matter, decaying trees, and houses. Or, they may be predators. Leafcutter ants mix pieces of leaf with their feces and make a bed to culture fungi to eat. Stokes, in A Guide to Observing Insect Lives, has an interesting write-up of how a group of ants cooperates to carry home a large piece of food.

Some species of ants can bite, and some species sting—the ovipositor, which workers don’t use anyhow, has been modified into a stinger—and some do both. Some also produce and spray formic acid or other chemicals, which act as irritants.

The BugLady met an instructor who claimed to be a connoisseur of ants. He said that black ants are too bland; small, red ants are too spicy, and that ants that have a red head and thorax and a black abdomen (like the (possibly) Alleghany mound ant pictured here farming the tiny tree hopper nymphs) are just right. Native Americans in the desert southwest collected honey ants and used them as sweeteners, and ant larvae and pupae provide protein for humans in parts of the world. Ants are also eaten by birds, reptiles, amphibians, mammals, fish and by other insects.

Breaking news! An abstract in a recent Science News reports on a species of U.S. ant that raids the nests of a smaller species and enslaves its young. The slaves do the housework and care for the young of their mistress. But, some slave ants have evolved a behavioral resistance to this and were pictured destroying young in the nursery (and referred to as “killer nannies”). And—this drama is playing out in the nest of the larger queen—In An Acorn!