Most adult insects die by late fall, leaving the next generation behind in the form of eggs or pupa (or, in the uncommon case of wooly bear caterpillars and their ilk, larvae). Generally, insects are in their adult stage for just a few months (or less), and many have a predictable flight period, a portion of the spring/summer/fall when we expect to see them.

The Angle-wings, butterflies like the Question mark and the Commas that have irregular wing edges, overwinter as adults (like Mourning Cloaks of recent BOTW fame). They overwinter in cracks and crevices in rock piles and tree bark. There, they certainly become “butterflysicles,” but their blood contains glycerols—antifreeze—that allow their tissues to withstand the winter’s cycles of freezing and thawing. Hibernators/aestivators/diapausers typically get their signals from day length, not temperature. It’s better to get all tucked in and then miss a few warm fall days than it is to get caught by an early killing frost. They mate and lay eggs in spring, and their caterpillars, being first out of the gate, get first crack at the spring veggies.

Question marks (Polygonia interrogationis) are handsome, medium-to-large sized angle-wings that have two broods each year in our neck of the woods. The brood that emerges in late summer and subsequently overwinters (the winter form) has a blue-ish border on the wing edges. Their offspring, the summer form, have hind wings that are pretty dark. They are both residents and migrants (they fly north, but not back south again). Question mark underwings demonstrates how well-camouflaged they are when they sit with their wings closed and why the Question mark got its name (squint at the middle of the hind wing). Question marks hang out in sunny openings and road edges. 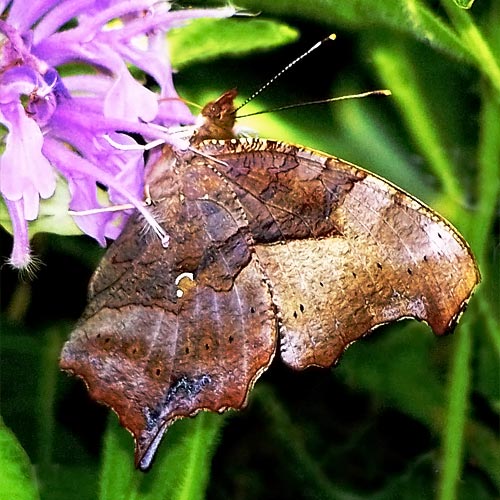 Female Question Marks lay their eggs in “stacks” and the resulting caterpillars may feed near their siblings. The larvae (which are decorated with amazing, orange-ish, branched, black-tipped spines called scoli) eat the leaves of hackberry, hops, nettle and elm, and the adults are scavengers, feeding on tree sap, rotting fruit, carrion and dung. Like other anglewings, they will land on people who are standing really still (especially in the sunlight) and probe for sweat. According to The Audubon Society Field Guide to North American Butterflies by Robert Michael Pyle, anglewings are prone (as are we all) to intoxication if the fruit they love to sip from has been fermenting in the sun too long. Butterflies are “quiet drunks”—an intoxicated Question Mark may pose for pictures and finally tuck in its legs and play dead.

The Eastern Comma (Polygonia comma) (a.k.a. Hop Merchant because of one of its larval food plants) is a wary butterfly that flies swiftly and erratically (most of the BugLady’s views of it are of its rapidly-departing rear). When it ducks into the vegetation and perches (often head-down), its dead-leaf/wood-grain wings make it tough to see. It is found on sunny woods edges and moist areas, where it may perch on the ground. Commas will also sit on people, crawling around until they find the right exposure and then basking. Douglas and Douglas, in Butterflies of the Great Lakes Region, report that they also seek sweat on people’s skin, often disconcertingly close to the eye of their human perch. Males will defend their “pied a terre” aggressively. 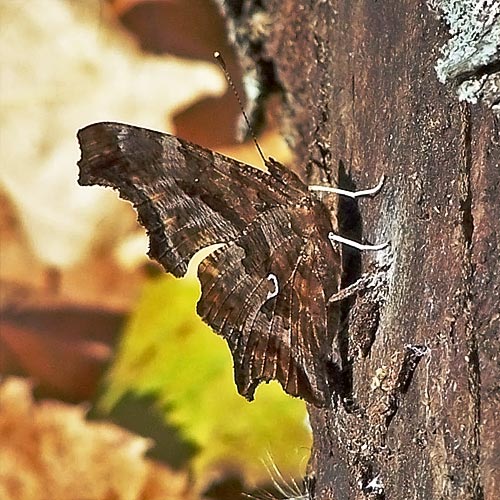 Commas in the south may have three broods. Caterpillar Commas (whose harmless) scoli are pale with black-tips and who have a prominent dorsal scolus) chow down on nettles, elm and currants. Comma caterpillars, according to David L. Wagner in the awesome Caterpillars of Eastern North America, will select a leaf and fold its edges under to make a shelter. The adults like the juices exuded by rotting fruits and berries, are also prone to public intoxication, and sometimes visit flowers. 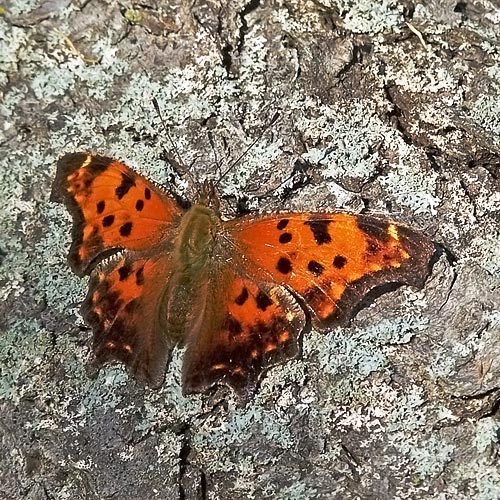