And Now for Something a Little Different X — Pileated Woodpeckers 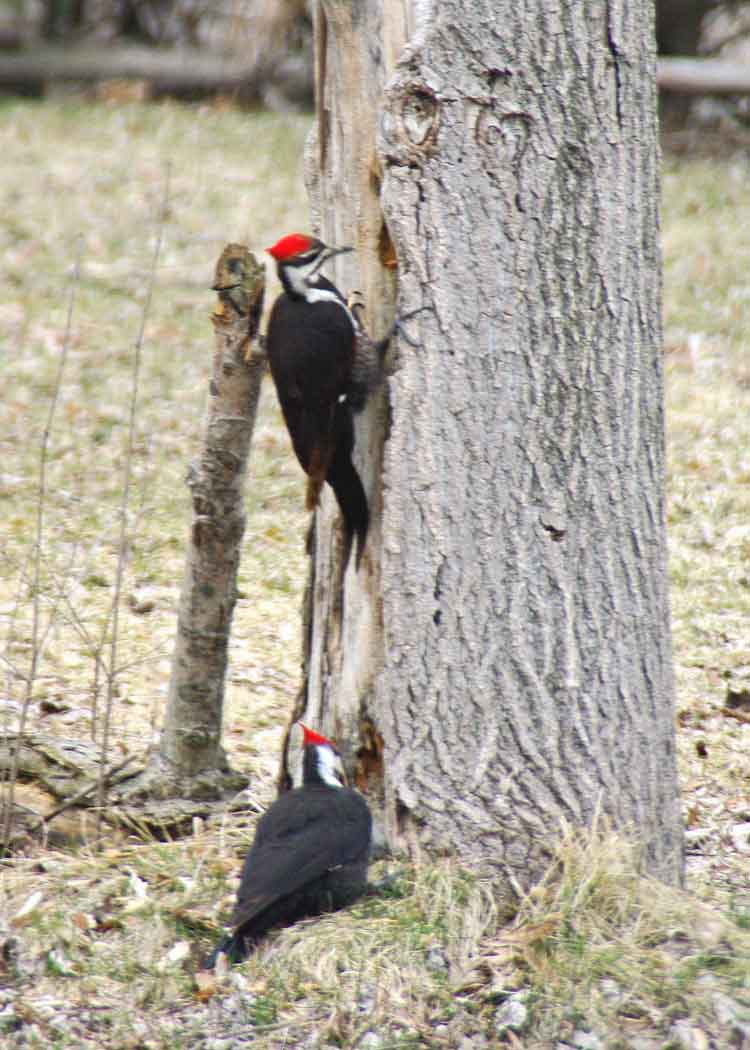 The BugLady has been hearing Pileated Woodpeckers recently – a few vocalizations here and there, and a bunch of territorial drumming. Some owls have a very early courtship – Great-horned Owls are already incubating – and some hawks start early, too, building the pair bond with breathtaking aerial maneuvers. But the BugLady is always surprised when Pileateds, the largest of our woodpeckers, begin announcing their intentions in mid-February.

This essay was originally written for the BogHaunter, the newsletter of the Friends of the Cedarburg Bog. The Bog is a 2300 acre wetland in Ozaukee County in Southeastern Wisconsin. Actually, it’s a wetland within a wetland within a wetland within….  Conifer and hardwood swamps surrounding a cattail marsh surrounding both an eyed, acid, floating-mat bog and a large, central, alkaline fen, the southernmost string/patterned bog (strangmoor) in North America, with alternating strings and flarks (not a typo, despite what Spellcheck says). The Bog is the BugLady’s church and her shrink. Adjacent to the Bog is the Cedarburg Beechwoods State Natural Area. 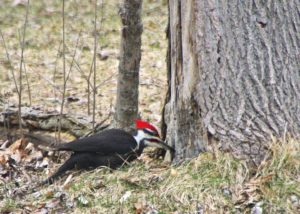 The clamor of Cranes and Geese may define the Bog’s wetlands, but the Pileated Woodpecker speaks for its uplands. Similar to a Flicker’s call, its big, whooping sounds have more depth and resonance. It also communicates by drumming rapidly on a hollow tree with its bill, a sound that can be heard at some distance. Both the males and females drum.

Seeing or hearing this Crow-sized woodpecker with its black and white, 30 inch wingspan, is often a matter of luck  Found throughout much of the United States, in dry uplands and wet swamplands, it is a secretive bird of mature woodlots. Signs of its woodworking efforts are seen more frequently than is the bird itself.

Its scientific name, Drycopus pileatus, defines it well. The Greek Drycopus means “tree cleaver,” and the Latin pileatus means “capped” and refers to the bird’s red crest. The pronunciation of its common name causes confusion for birders – some say PIE-lee-a-ted and others PILL-ee-a-ted (we Midwesterners tend to use the latter), and both are OK. Like its slightly larger southern relative the Ivory-billed Woodpecker, with whom it shares/shared the southern swamps, the Pileated was sometimes called the “Good God” or “Lord God” bird.

Pileated Woodpeckers are not migratory, and although they are somewhat more relaxed about it in winter, they are territorial year-round. A serious dispute involves vocalizations and chasing and may escalate to striking at a rival with wings and bill.

The male courts by perched and aerial displays of his striking plumage patterns.  Pairs are monogamous, but the birds will find another partner if one dies. 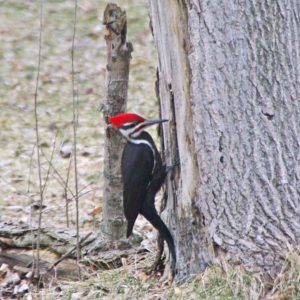 For its nest, it needs mature trees. The round hole it excavates for its eggs faces east or south and is three to four inches across, about 45 feet off the ground, in a trunk that is at least 15 to 20 inches in diameter. The male does much of the nest excavation, digging down a foot or more into the trunk and clearing the accumulating wood chips by tossing them out of the entrance hole. Once finished, the female lays four eggs, which are cushioned only by wood chips. Both parents incubate the eggs and feed the young. Because these are big birds, and two adults (plus young) would more than fill a nest hole, they also make separate roosting holes.

Other birds may try to usurp their nests in summer, and old nest holes provide housing for wood ducks, screech owls and a variety of cavity-nesting mammals, but Pileateds themselves rarely use a nest hole more than once. They will also use man-made nest boxes.

In search of food they carve a deep rectangle, sometimes a foot long and several inches deep, into dead or dying tree trunks, giving new meaning to the phrase “let the chips fall where they may.” Carpenter ants are the main item on their menu; they pinpoint accurately the location of an ant nest, excavate a fresh crevice in the wood, extend a long tongue, and lick up the ants. Sources say that songbirds like wrens and flycatchers often visit feeding holes to take advantage of insects uncovered by the woodpeckers.

Pileated Woodpeckers also eat beetle grubs and a variety of other small insects and some nuts and fruits (even poison ivy berries). The BugLady has seen pictures of Pileated Woodpeckers at suet feeders (but not at hers), and as with all woodpecker species, if they’re checking out the siding of your house, you may have an ant problem. They often feed on or near the ground, where they’re vulnerable to predation by mammals, including house cats. Weasels, rat snakes, squirrels and grey foxes (our tree-climbing fox) are nest predators, and they are preyed on in the air by hawks, owls, and eagles!

Both hunting and logging took their toll on Pileated Woodpeckers, and their numbers plummeted in the 18th and 19th centuries. In the 1800’s they were shot as trophies and for food, although John James Audubon and others had reported that they tasted like the worms and ants they eat and were “extremely unpalatable.” The harvesting and fragmentation of mature forests not only removed the large dead trees that served as nest sites, it also broke up vast stands of trees into units too small to support a pair of woodpeckers.

But the birds adapted to life in smaller trees (even utility poles!), and both woodlands and woodpeckers are making a comeback. Most importantly, they have become more tolerant of human neighbors. Fifty years ago, Ozaukee County had a single breeding pair of Pileated Woodpeckers, recorded annually in the Cedarburg Beechwoods State Natural Area. Although they are more common in the north, they are now seen all over the state, and they continue to move into southern Wisconsin.

[The BugLady took these shots through her patio door at her old house. The same patio door she intended to wash each season so that she could take pictures through it……  See a nice slide show at All About Birds.]