One of the first rules of bug finding is, “Look on flowers.” As it happens, ox-eye daisies, those familiar, non-native (and in some instances, invasive) flowers are in full bloom. Yarrow, which is listed in most wildflower guides as alien but which probably is not, is just starting. Both plants are lovers of the sun, of disturbed ground, and therefore of road edges. Both are bug-magnets, attracting herbivore and carnivore alike. Both are members of the Aster/Composite family, and each “flower head” is actually a whole bouquet (the white “petals” of a daisy are actually separate flowers called ray flowers, and the yellow center is made up of many disc flowers).

Daisies and yarrow are places where bugs come to graze and be grazed upon. The BugLady is thrilled to see them crowded with invertebrates now, after the sere summer of 2012. Ditto the milkweeds, covered with insects and not even in bloom yet. Go outside!

The BugLady cheerfully admits to a bias toward crab spiders (Mom really does love them best), so her daisy and yarrow shots are spider-heavy. The spider with the pink/red stripes is the Goldenrod Crab spider (Misumena vatia), who has the ability to turn yellow (achingly slowly) when she sits on a yellow flower. The name of the game is camouflage. Crab spiders practice sexual dimorphism, with males considerably smaller and leaner than females. Look for them on the abdomens of the females in the last two pictures. The little guy on the goatbeard seeds (like an extreme dandelion) is also a male.

No life histories or ecological lessons or further explanations needed today—the Album of Crab Spiders celebrates these beautiful creatures at work and at play. 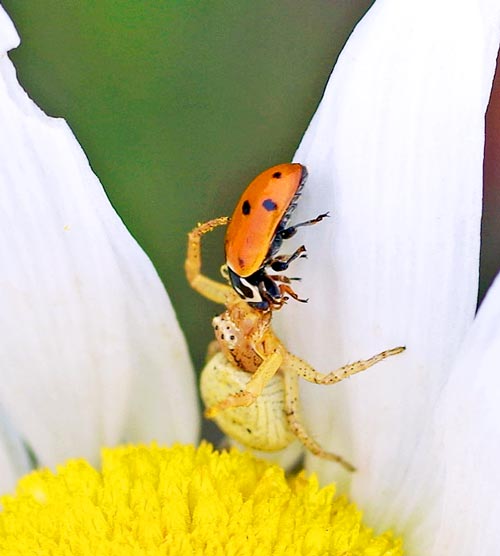 P.S. The BugLady is not certain about the timing of next week’s BOTW. The people from the Computer Museum are coming to claim her present machine, which is happily running Windows XP and Office 2003. Expect whining as this old dog attempts some new tricks.
Spiders