Another BOTW, another large and complex group of wasps&mdashthis time, the family Ichneumonidae. Isn’t this one a beauty!

Like last week’s sawflies, Ichneumon wasps are in the giant order Hymenoptera (ants, bees, and wasps), but they’re in the family Ichneumonidae, a group whose larvae are parasitic on a variety of other invertebrates. Write-ups about Ichneumons tend to say “This is how many we know about, but we suspect that there might be “X” more waiting to be discovered.” How many? The 5,000 known species in North America could be joined by an additional 3,000, and the “estimated 60,000” worldwide might actually total 100,000 (beetles are still the champs at nearly 400,000 species, with 220,000 of those being weevils). It takes 28 subfamilies to get the Ichneumons sorted out (their taxonomy is, of course, unsettled). Ichneumon comes from the Greek word for tracker, and they’re called “Ichneumon flies” in older literature. 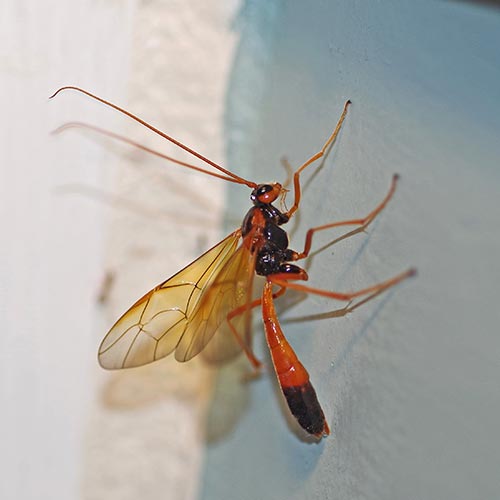 Today’s wasp demonstrates the general body plan of Ichneumons—a long, thin, flattened abdomen (the name scorpion wasp refers to their often-arched abdomens), long legs, and long antennae (some groups have white or yellow band on their antennae), and a twitchy demeanor. They can be very hard to tell apart. The BugLady has a picture of a lovely little red, white and blue ichneumon and so far, she’s found wasps resembling it in three different Ichneumon families (picture-keying has its limitations). Some females have impressive-looking stingers, which are actually ovipositors (egg-depositors). They’re considered harmless; as solitary, rather than communal/social wasps, they don’t have hearth and home to protect, but some can sting memorably if provoked.

Adults are vegetarians, sipping nectar and water, but Ms. Ichneumon lays her eggs on/in the eggs or larvae of other insects, especially moth and butterfly caterpillars and the larvae of other wasps (a few prefer spiders). Ichneumon larvae are koinobiont parasitoids—that is, they keep their hosts alive and functioning (more or less) as they feed either from the inside or the outside, eating the non-essential bits first and delivering the coup de grace when they are ready to pupate. They ultimately emerge as adults (the host, alas, does not survive the encounter). Many kinds of ichneumons are linked with specific prey, and ichneumons are considered effective biological controls of some pest species. The adults’ waspy appearance doesn’t fool all of their predators, and their larvae are often consumed when their lethargic hosts are nabbed.

Their larval eating habits so greatly disturbed Charles Darwin that in a letter to botanist Asa Gray, Darwin lamented that “I own that I cannot see as plainly as others do, and as I should wish to do, evidence of design and beneficence on all sides of us. There seems to me too much misery in the world. I cannot persuade myself that a beneficent and omnipotent God would have designedly created the Ichneumonidae with the express intention of their feeding within the living bodies of Caterpillars, or that a cat should play with mice.”

This wasp looks like Opheltes glaucopterus (no common name) (there are a number of Opheltes in ancient Greek history/mythology, most of them warriors) (plus one pirate). For BugFans who are keeping score, it’s in the subfamily Ctenopelmatinae, whose members mostly concentrate their efforts on sawflies. Although older sources list only two species in the genus, newer sources lump the Asian species O. japonica with O. glaucopterus. Distribution data are spotty, but its North American range seems to stretch across the northern tier of states and southern Canada, and it also shows up on British naturalist sites and in the Dutch and Swedish Wikipedias. O. japonica, as its name suggests, is found in China and Japan (if it exists).

With all of the complicated anatomical terminology that’s used to describe insect species, it’s delightful to find a species that has “inflated (bulging) temples” as a distinguishing feature.

Opheltes glaucopterus parasitizes the larvae of the Elm/Large Willow sawfly (Cimbex americana) and a few other sawflies. Its biology was discussed in 1891 in a publication of the South Dakota Agricultural and Experiment Station in connection with the Large willow sawfly

… it is scientifically known as Opheltes glaucopterus, Linn, and is very nearly, if not exactly, the same as a species that is known to prey upon a corresponding sawfly in Europe. These parasites mature later than the sawflies, not appearing until the larvae of the latter are nearly full grown. The females lay their eggs under the skin of the worms, one in each. The worm thus attacked is able to go on and make its cocoon, but at this point it succumbs to the larva of the enemy. The latter finishes its development on the remains of the former, leaving only the skin, and then it makes a slim, black cocoon, inside the sawfly cocoon, of the same length but only half to two-thirds as wide. From this comes the perfect [adult] insect the next season. The manner of egg-laying is very interesting, and was repeatedly observed last summer. The female parasite, an exceedingly active and sprightly fly, passes over the leaves, lighting here and there on one, and walking its length, continually moving her long antennae (feelers) up and down, and curling them over the edge of the leaf so as to feel on the lower side. She appears to have very little sense of sight, depending mainly on touch. Having found a worm, she strokes it with her antennae a few times, then, arching her body, she brings the tip of it under her body, and thrusts it forward so as to touch the larva in front of her. In an instant, the work is done, if the victim has not escaped by dropping to the ground below, which is a common occurrence.

In the 1930’s, a researcher named John Gerould was investigating a phenomenon called “heart beat reversal,” and he discovered that it is not uncommon in adult insects that develop via complete metamorphosis (egg-larva-pupa-adult). The heart of one of his test subjects, an Opheltes wasp, beat both forward and backward, sometimes for periods of more than a half hour each. The reversal seemed to be “self-starting – not (necessarily) connected with an external stimulus. Some mosquito hearts may reverse five times per minute. Fruit flies do it; the hearts of female Chinese silk moths reverse while they’re “calling” (emitting pheromones). The pupa of the Carolina sphinx moth does it. What’s happening?

Unlike ours, insect circulatory systems are not restricted inside tiny blood vessels. Their hemolymph (blood) flows directly past the tissues and bathes them (in those small bodies, it doesn’t have far to go) pumping nutrients and other necessary substances through three internal chambers in the insect’s body and removing wastes (but not oxygen, which is handled by the tracheal system) (Insect Physiology: Circulatory System—click on links in the text to make the animation work). The circulatory system also controls the insect’s hydraulic pressure.

Maybe the changing pressure as the hemolymph reverses direction “gooses” the tracheal system and aids in the removal of carbon dioxide. Maybe it regulates the hemolymph between chambers. Maybe it provides the hydrologic pressure that allows the silk moth to keep her abdomen raised while calling. Maybe the sloshing hemolymph more readily reaches into all the nooks and crannies of the pupa. Maybe all of the above; maybe more.

The BugLady is still trying to wrap her head around this.

Wisconsin Life: A Walk through the Cedarburg Bog