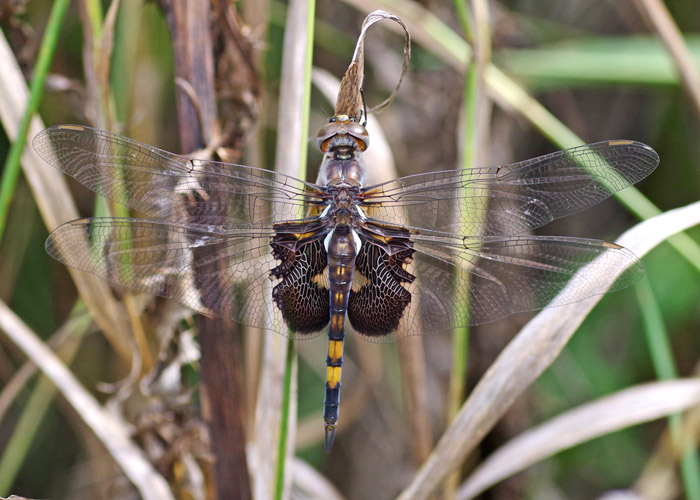 Forest Beach Migratory Preserve is a repurposed golf course north of Port Washington (WI), owned by the Ozaukee Washington Land Trust. It’s mainly grassland, with woods and some brushy areas, and it was designed to serve as a stopover/refueling “bed and breakfast” for migrating birds. Water hazards were turned into small ponds, more ponds were dug, and tall grass prairie plants were planted. It glows with goldenrod and brown-eyed Susan these days, punctuated by New England aster and the last of the blazing star.

Creating a good place for birds has helped insects, too.

There’s a sand scrape near one pond (maybe an old sand trap) that the BugLady always checks – poor soil with horseweed (Erigeron), Queen Anne’s lace, willow sprouts and bare spots –and there she found a small drama playing out. 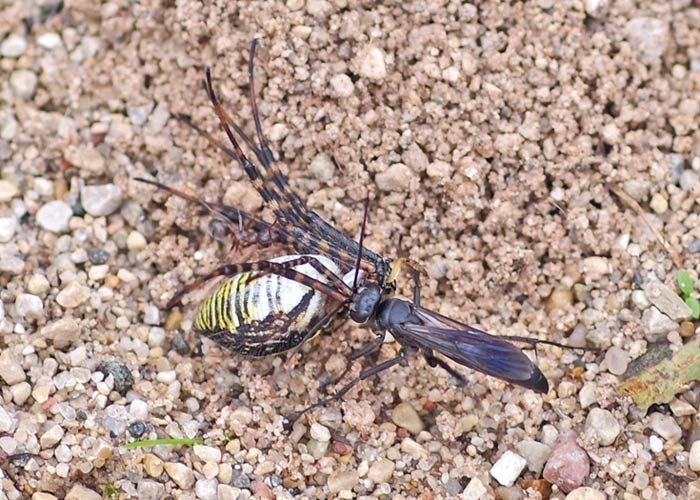 Communal wasps and bees get a lot of press because of their interesting behaviors and social hierarchies and because of the dangers of stumbling into one of their nests by accident. The vast majority of wasp and bee species, though, are solitary; and in the absence of a big crew of workers to share the child care duties, most have devised a system where their larvae take care of themselves – with a little prep from Mom. She makes a tunnel in wood or soil, often with several chambers for several young, caches each with a bunch of food (stunned invertebrates), lays an egg on/near the food, closes up the chamber, and departs. When the egg hatches, dinner is served, and the larva exits the tunnel after pupation, as an adult. Various species of wasp target various types of prey – caterpillars, stink bugs, cicadas, spiders, and even other wasps. 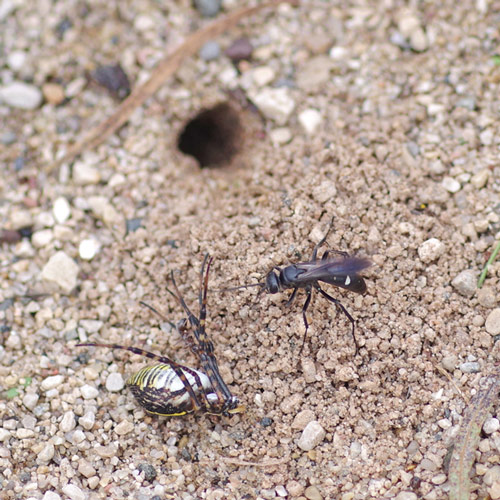 In the sand scrape, the BugLady saw a small-ish wasp hauling a banded orbweaver spider across the sand toward a hole she had dug. It was a tough slog – the spider was bigger than the wasp was, but it had been stung and paralyzed and was not resisting. At one point, the wasp stopped and fussed at something on the spider’s legs – an ant, just visible in the pictures, was interested in the spider. 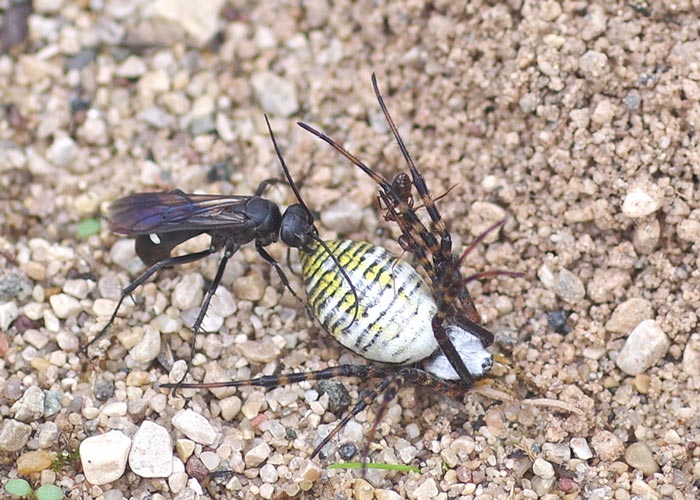 She dragged the spider past the hole and into a stand of horseweed about 18” tall, picked a fairly bare stalk, and hoisted the spider up behind her. She pulled it all the way to the top of the plant and carried it back down again, and part-way up a neighboring, leafier stalk, where she wedged it into the angle between a leaf and the stem. Then she returned to the ground without it and fussed around the opening of the hole for a bit, removing a piece of dry grass stem that had blown across it. The BugLady wondered (anthropomorphically) if the wasp was trying to hide the spider from the ants, but she found a note about a One/Two-spotted spider wasp stashing prey on plant leaves while she continued to work on a tunnel. 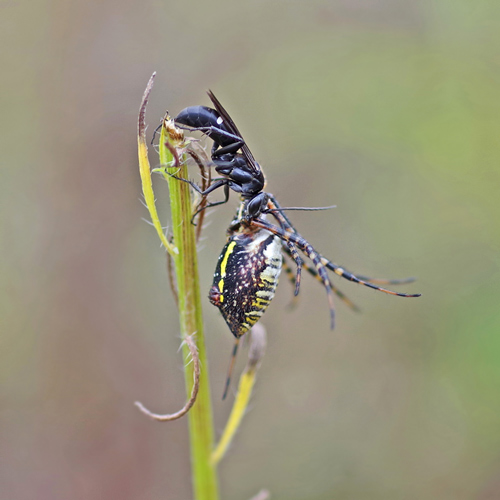 The wasp is a spider wasp (family Pampilidae) called Episyron biguttatus (probably), which Wikipedia calls the Two-spotted spider wasp and “Why Evolution is True” calls the One-spotted spider wasp. Genus members are found throughout North America in sandy, easily excavated soil that they dig by biting it and then sweeping the loosened particles aside with their (combed) front legs. Adults haunt the flower tops looking for orb-weavers and wolf spiders.

As the BugLady watched the spider, a bird swooped past her, and she turned in time to see a falcon heading for a dead tree. It was a Merlin (the falcon formerly known as Pigeon Hawk), and it sat on a dead branch preening and watching the crazy woman photographing spiders and wasps (sorry, terrible light conditions + insufficient lens power = Hail Mary shot). 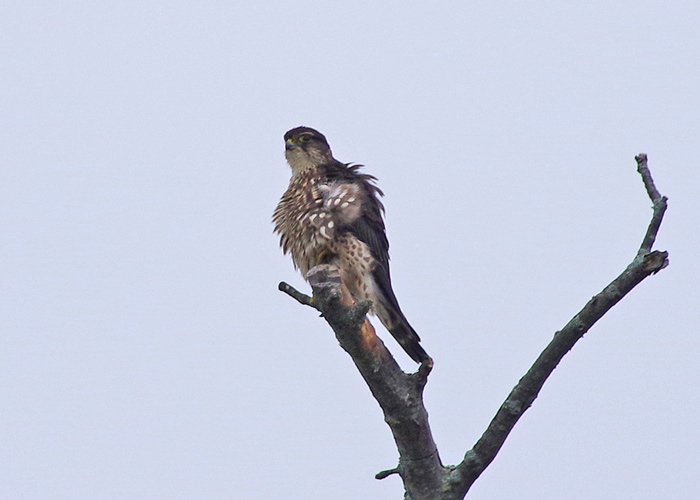 It was not surprising to see this bird. Hawk migration is warming up, and both Merlins and their smaller relatives, the Kestrels, time their migration to coincide with that of Common Green Darners and Black Saddlebags. Their migration is fueled by dragonflies, and the air at Forest Beach has been full of darners lately. Merlins, whose diet also includes lots of small birds, grab darners out of the sky.

The soundtrack of the BugLady’s walk was provided by meadow katydids and tree crickets. For more about tree crickets, see this past BOTW episode. The voices of insects and the changing color of the leaves are a little gift from Mother Nature to make up for the upcoming quiet and monochromatic months.

Go outside – listen to bugs!