These two humble planthoppers live and die without making many ripples—although they may nosh on some desirable plants, they seem to nosh lightly. Other than brief biographies of the Two-striped and the Conic/Green cone-headed planthopper, not much is known about the life histories of the 20-odd species in the genus Acanalonia north of Mexico. The on-going question seems to be, “Who are they?” 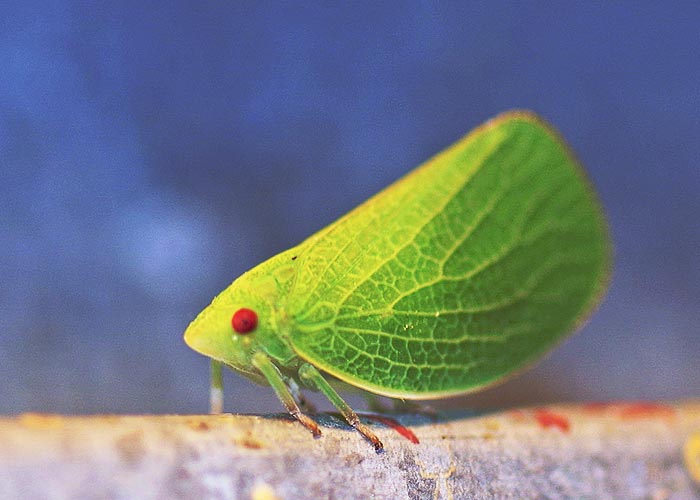 They are (right now) members of the genus Acanalonia, in the family Acanaloniidae (the Acanalonid planthoppers) (APs), in the planthopper superfamily Fulgoroidea (though some folks park them in the family Issidae). If your bug book is old, you will find them within the order Homoptera, which has since been rolled together with the order Hemiptera. Many of the groups formerly in Homoptera are (for now) in the suborder Auchenorrhyncha (the free-living Hemipterans) (whew!). The Fulgoroidea are described as an “exceedingly diverse yet excessively puzzling” bunch. They have, as one old time entomologist wrote about a different group, “furnished a great deal of amusement to classificationists” and will apparently continue to do so. 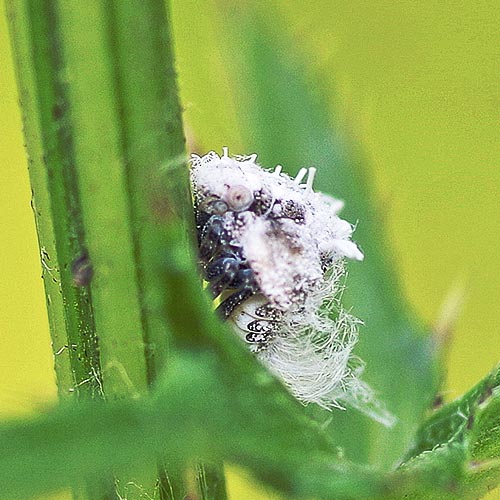 Whoever they are, they’ve been around for a long time, with fossils known from about 45 million years ago. Today, Acanaloniidae is largely a New World bunch; the TSP and the CP are found on trees and shrubs east of the Great Plains (though early in this millennium, CPs jumped the Pond and are now found in Italy, where there’s some concern that they may become pests).

APs hide on plants during the day, camouflaged by color and texture; an AP snugged up against a plant stem looks a lot like a seed pod, leaf, bract, or stipule. Their wing veins are described as having an irregular and “reticulated” (net-like) pattern, and while most are green, they occasionally come in pink. At about 1 cm in length, they could be mistaken for a leafhopper or an adult spittlebug, except for the appearance of their legs and heads and wings and antennae (and a scholarly article was written about the diagnostic characteristics of their external reproductive structures). APs can leap many times the length of their bodies (hence the name, planthopper), but most of the time, they walk sedately. 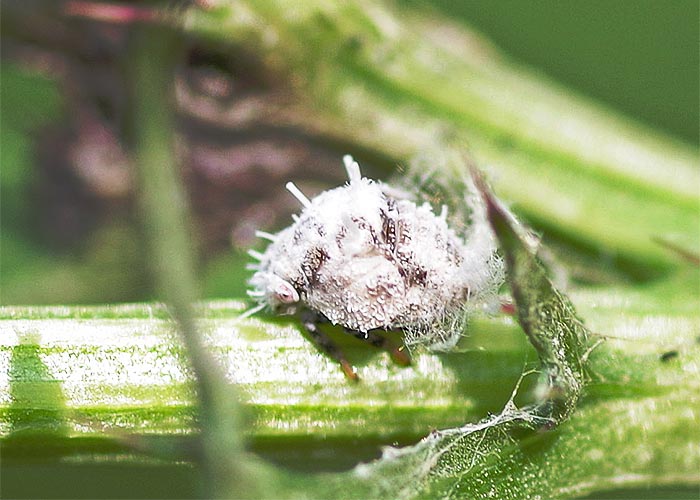 Acanalonids have The Best Nymphs Ever! They adorn themselves with a mare’s tail of long, hydrophobic (water repellant) filaments made of wax that they produce in glands in the abdomen. The filaments serve (depending on whose report you read) to disguise the nymph or to protect it from would-be predators or to keep it from drying up and/or to give it something to do with the excess honeydew it produces. At a distance, a congregation of AP nymphs might resemble a bunch of wooly aphids, so look twice. Waxy strands often persist on branches after their makers have matured and departed.

Both nymphal and adult APs are polyphagous (they take their nutrition from a variety of plants rather than being specialists), puncturing the stem of a plant with their sharp mouthparts and sucking up the sap. Sap leaves the plant under pressure, and scoots right on through the APs digestive system and (minus some nutrients) out the APs other end. This secretion is called honeydew, and it’s an important food for other invertebrates. Their feeding may not drain the sap from a plant, but planthoppers are sometimes guilty of inadvertently spreading plant diseases. APs are parasitized by several organisms, including a moth caterpillar that feeds on the dorsal (top) side of the planthopper’s abdomen. AP eggs, which may also be protected by a coating of wax, are inserted in woody or herbaceous stems by late summer or fall. They hatch and feed the next summer.

Two-Lined Planthoppers (Acanalonia bivittata) are the most common of the Acanalonia and are about 6 mm long (1/4”) with reddish stripes on the tops of their wings. They are found on black walnut, blueberry, cranberry and goldenrods, among other plants. The BugLady thinks these Acanalonia nymphs are TLPs, and they were on swamp thistle. 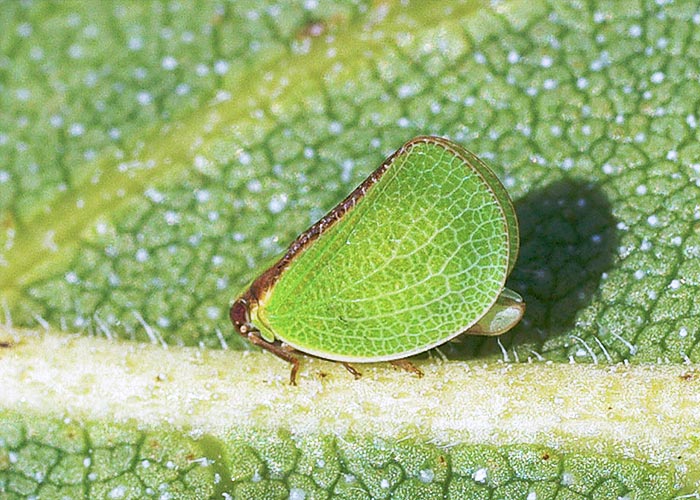 Conic/Green Cone-Headed Planthoppers (Acanalonia conica) are about the same size with a characteristically-shaped head. They feed on basswood, wild grape, catnip, goldenrod, milkweeds and ginseng, as well as some agricultural crops, and they may feed in groups that include other kinds of planthoppers. 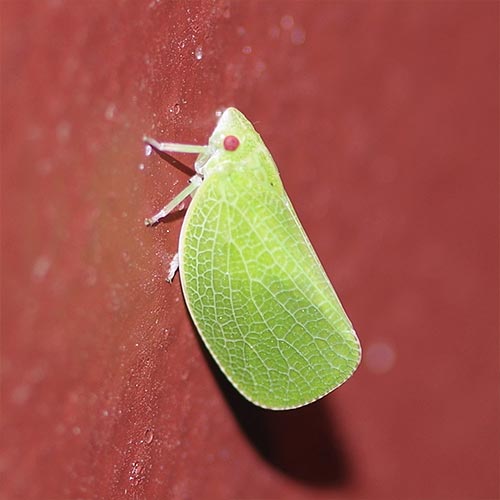