Remember what the BugLady always says about common names—they are colorful, historic, descriptive, sometimes whimsical, but they do NOT tell you who is related to who(m). In the case of the sac spiders, even the science is in a state of flux. A Tale of Two Spiders is a story of BOTW research that went awry, almost immediately.

Every summer the BugLady admires the egg shelters formed from sedge leaves by a sac spider called the Riparian Sac Spider (Clubiona riparia). When it is time for her to lay her eggs, the female bends a portion of a monocot leaf into a cone shape (the BugLady is confident that you recall your high school biology lessons about monocots and dicots). She doesn’t break it—the distal portion (the part beyond the case) stays green, which means that the plant juices are still flowing. 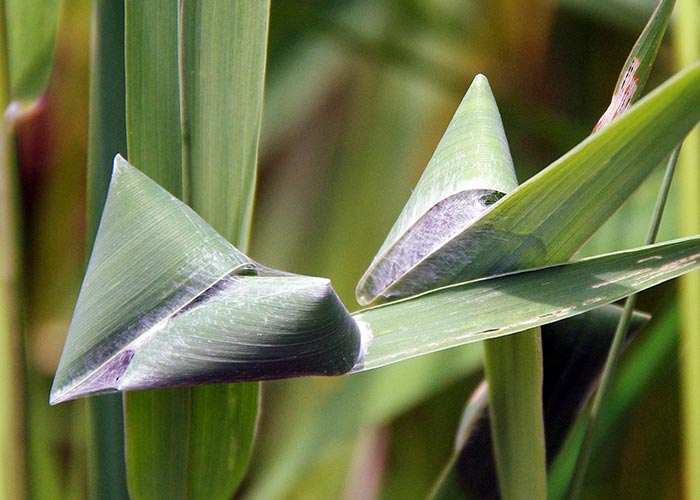 The sac spider uses silk to hold the leaf edges together and to line the enclosure. Medicinal plant researcher James Duke calls this structure “both nursery and coffin.” She deposits her eggs inside, stays to guard her brood, and she dies there before her offspring emerge. They, hungry for protein in their first hours, consume the first bit of meat they come across, which is their mother’s carcass. The BugLady is flashing on Shel Silverstein’s cannibalistic metaphor for motherhood, “The Giving Tree” (“you cut off all my limbs long ago, but if I had more, I’d give them to you?” Really?).

Parental care is not common among the arthropods, so why do these care-givers give care (The big ecological question is always “Why is it worth expending the energy?”)? Researchers in New Zealand looked at egg guarding in another species of Clubiona. They discovered that when the vigilant female was taken away, the unattended eggs were eaten by non-breeding Clubiona females while males and breeding females left the egg cases alone (egg-eating is an odd behavior for critters whose prey is usually wriggling).

UW Green Bay Spider expert Michael Draney fills in some gaps in the Clubiona life history (thanks Mike). He calls genus members “medium-sized, pale, wandering spiders. They are found in all terrestrial and wetland habitats in Wisconsin, but are probably most abundant in wetlands…they overwinter as immature (last instar immatures, or “penultimate” males and females). They molt to adulthood in the spring. The males generally are present only in the spring, but the females live throughout the summer.” They don’t trap prey in webs; rather, they stumble across it in their nocturnal wanderings on vegetation.

The various Clubionas can be tricky to tell apart. They have eight eyes, two of which reflect light; the structures that reflect the light allow the spiders better night vision. Pictures of adults can be seen at http://bugguide.net/node/view/20984/bgimage.

So, why are you more confused than usual, dear BugLady? Well, for starters, there are two different genera of “sac spiders,” in two different spider families, in Wisconsin (and several more families that use the “sac spider” moniker elsewhere). The above-mentioned Clubiona is in the Sac Spider family Clubionidae. Members of the genus Clubiona are called the Leafcurling Sac Spiders. Clubionas are found throughout the Americas (bugguide.net lists 49 species in North America) and the internet has reports on native Clubionas from the Old World to Australia.

Second, the other local sac spider, in the family Miturgidae (the Prowling Spiders), in the genus Cheiracanthium (the Long-legged Sac Spiders), was until recently classified in the family Clubionidae. The long-legged sac spiders are mainly an Old World genus, with just a few species in America. Sounds like Clubionidae was a taxonomic catch-all for a whole bunch of spiders with just a few anatomical features in common. The BugLady suspects that the taxonomic dust has not settled yet.

Third, according to Professor Draney, the Clubiona and Cheiracanthium sac spiders may overwinter in your house, side by side. But the BugLady is getting ahead of herself.

When you Google “sac spider” most of your hits relate to the Cheiracanthum sac spider. Why? Because the little suckers bite, painfully and poisonously, so they get more Press. Oh, there are some accounts of Clubiona bites raising a blister (or worse, in Australia, but Australian animals seem to be enthusiastically and excessively toxic). UW Extension Entomologist Phil Pelliteri feels that any spider bite in Wisconsin attributed to the (practically non-existent, here in God’s Country) Brown Recluse spider, whose bites notoriously turn surrounding tissue into a necrotic and ulcerated lesion, is from a Cheiracanthum sac spider instead.

Also, Cheiracanthum are RIPPED FROM THE HEADLINES!! These are the spiders implicated in the recent recall of Mazda’s due to dense webs spun in hard-to-reach spots in the engine. The webs were impeding air flow and raising engine pressure, with potential inflammable results.

Like the Clubiona sac spiders, the Cheiracanthum hunt at night, spending the day under cover, often in a silk-lined sac. They prefer the warm interior of a house in winter, where they often spun a retreat near the ceiling (heat rises).