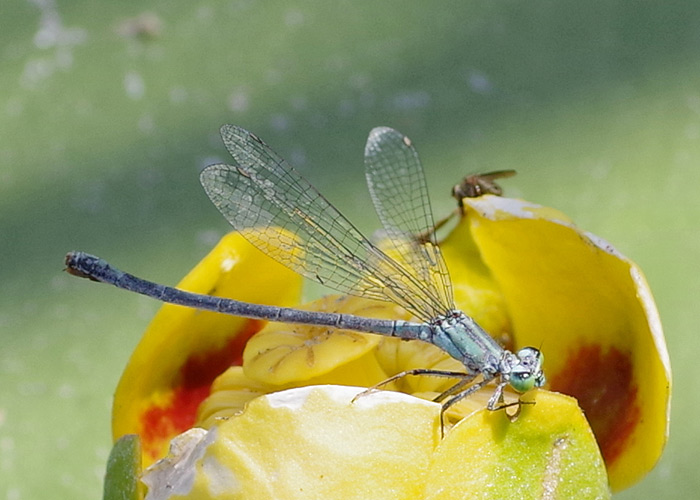 In mid-July, the BugLady ran into BugFan Freda at an Ozaukee Washington Land Trust property at the west end of Lake Twelve. Lake Twelve is famous because of the presence there of not one, but two rare (in Wisconsin) damselflies – the Slender Bluet and the Lilypad Forktail. The bluet has been on and off of our state radar since 2007; the forktail was first recorded at Lake Twelve in 2017 but has been seen intermittently in Wisconsin since 2010. Freda introduced the BugLady to both species.

A week later, when she was chasing dragonflies at one of her familiar haunts at the north end of the Cedarburg Bog, the BugLady photographed (badly) a suspicious-looking damselfly that turned out to be a mature female Lilypad Forktail (Ischnura kellicotti).

The species, originally called Kellicott’s forktail or Kellicott’s thin-tail, was first described in Entomological News, Vol 9 (1898). Along with the dancers, bluets and sprites, forktails are in the Narrow-winged/Pond damselfly family Coenagrionidae; “forktail” refers to projections at the tip of the male’s abdomen.

The BugLady loves common names. Sure, if you say Ischnura kellicotti anyplace in the world, there’s only one critter you could be talking about. But common names – bestowed by the people who experience a species where the rubber hits the road – allude to an organism’s appearance, taste, toxicity, smell, squishiness, hairiness, prickliness, all of the above, and much more. Lilypad forktails are named for their chosen habitat.

They are tied to a single group of plants – water lilies – a habit that is uncommon among Odonates. So attached are they to water lilies that when they perch on one – and they seldom perch anywhere else – the tip of their abdomen is usually bent down to be in contact with it. It’s not known whether this contact allows for support or for some kind of predator detection, and several authors speculated that the damselfly uses the bent tip as a springboard when it takes off, a la springtails. Their relatively short legs keep them close to the leaves, and their weak flight carries them low, directly from leaf to leaf or from leaf to prey. So attached are they that the female lays eggs into the water lily leaf and the naiad lives clinging to its underside, coming topside only when it’s time to emerge as an adult. So attached are they that people who want to see one often must take to canoes or kayaks to get out to the lily pads, or must wade or swim. So attached are they that people who want to net one find that netting the whole lily leaf works best.

Male forktails and male bluets are often blue and black – forktails may resemble the “black-type bluets” whose front and rear are blue, but whose abdomens are mostly black. Lilypad Forktails are small, under 1 ¼”. Like Eastern Forktails, most females start out gloriously red-orange (some females mimic the blue and black of males), and they fade to slate-blue as they reach reproductive age due to pruinosity – the deposit of “hoary” flakes on various parts of the anatomy. In all stages, they have oversized “eyespots” on the back of the eye. See nice pictures of all the “plumages” here, including a dark teneral with yellow wings and a naiad. Thanks to BugFan Freda for the face-to-face shot. 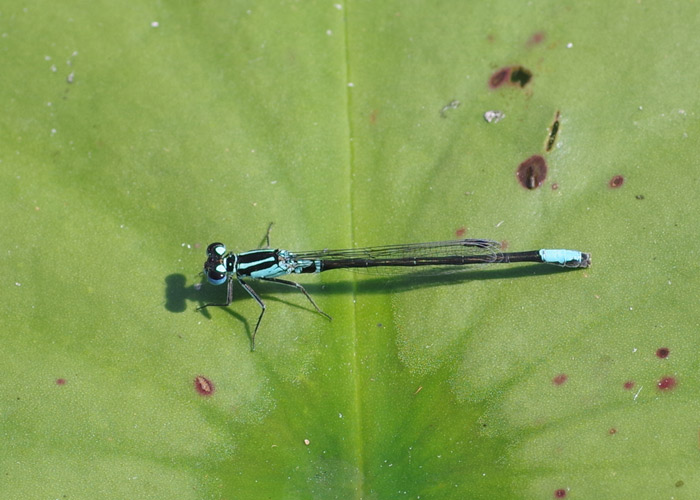 Females of many species of odonates have an “I’m not in the mood” posture, and it often includes a down-turned abdomen. Female Lilypad Forktails do not have or need such a signal; apparently, their habitual posture is enough and they don’t get hassled!

Lilypad Forktails have an odd range. They are an eastern/southeastern species that, according to Paulson’s Dragonflies and Damselflies of the East, is found at lakes and ponds with lots of water lilies in states bordering the Atlantic from the Canadian Maritime Provinces (first record – 2017) to Florida, and then along the Gulf Coast to Texas, with tongues extending north toward the Midwest along the Mississippi River, and with some disjunct populations inland and around the south end of Lake Michigan.

What does it looks like when a species goes on the march and expands its range? The BugLady sure wishes that every state had a dragonfly website as lovely and searchable as the Wisconsin Odonata Survey. In Wisconsin (and in some of the other states that it has been recorded in), the Lilypad Forktail is a Species of Special Concern, a watch list status based on a specie’s highly limited range and small numbers of populations, as well as an assortment of threats. In the case of the forktail, it’s not being wiped out here, its numbers are low because it’s attempting to move in from outside the state. Probably. 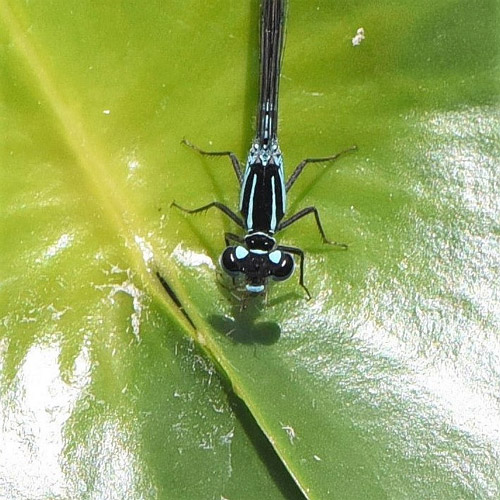 The BugLady attempted to check the status of the Lilypad Forktail is within its given range, which took much longer than it should have. As has been lamented in these pages before, she is “key-word challenged” – things are seldom filed away where she would put them. Plus, state dragonfly lists can be hard to find. And some State Natural Heritage sites (the organizations that track sensitive species) are remarkably hard to navigate (you know who you are) or have lovely interactive pages where you can search lists of sensitive species by county or plant community/region but not by species (ditto). And a number of states that she investigated apparently either have 100% A-OK insect populations or don’t track insect populations (ditto). One of the states in its range, a state with only one known Lilypad Forktail location, “does not currently have state threatened and endangered species legislation.”

Keeping in mind that it’s a small damselfly that looks an awful lot like another small damselfly, what did the BugLady find? In coastal states south of Delaware, it’s not considered common (except, perhaps, for some local populations), but it’s not considered to be in trouble, either. Away from that core range, it’s listed as “greatest conservation need” in Maine, Vermont, and Delaware, but “secure” just north of Delaware in New Jersey; “vulnerable” in Connecticut and in Oklahoma, where one site noted that owners of farm and recreational ponds in Oklahoma often consider water lilies to be a pest plant and eradicate them; “imperiled” in Pennsylvania; and “state endangered” in Ohio. In other inland states in its range, its population levels are apparently not considered alarming enough to track.

Species advance – two steps forward here, one step forward there, fall back, regroup. With a little help from our friends.