Flies belong to the order Diptera (“two wings”) and although there are a few wingless fly species (an oxymoron?), there are no four-winged flies (and the majority of non-fly insects that do have wings have four of them). Flies practice Complete Metamorphosis, morphing from egg to larva (a legless, cylindrical “maggot”) (maggot—such a prejudicial term) to pupa to adult. Diptera is a huge order, tallying around 86,000 species worldwide, with more than 16,000 species in the U.S. This episode, “A Few More Flies” showcases the BugLady’s favorite flies (mostly non-biters).

Robber flies, with their long, narrow abdomens, resemble small dragonflies. Dragonflies and robber flies both use their spiny front legs to capture their prey on the fly, and both groups “hawk” their prey—spotting it from a perch and flying out to grab it—like birds in the Flycatcher group. They may also pounce on resting insects. Their menu includes bees, wasps, beetles, spiders, moths, butterflies, and flies (even the occasional robber fly), and they’ll pursue insects almost as big as they are. 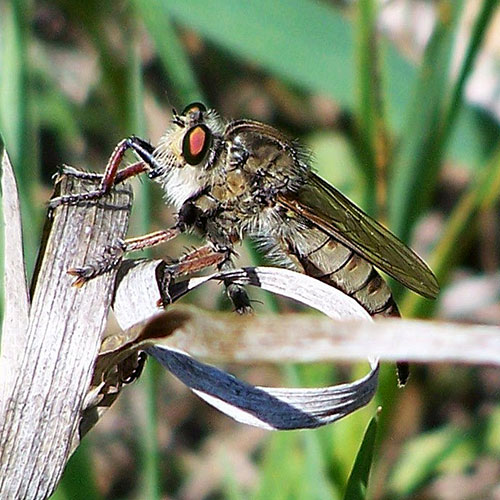 Some species, especially in the genus Promachus), make a loud buzz while flying. Large Robber flies in the genus Mallophora prey on honey bees, wasps and bumblebees. Robber flies use their proboscis to suck out the bodily fluids of their prey, discarding the “empties.”

But not all robber flies look like these two; they range from slender 2-inchers down through chunky compact and sub-compact models, but all have a bearded face and a “dent” between the eyes (and are camera-shy). 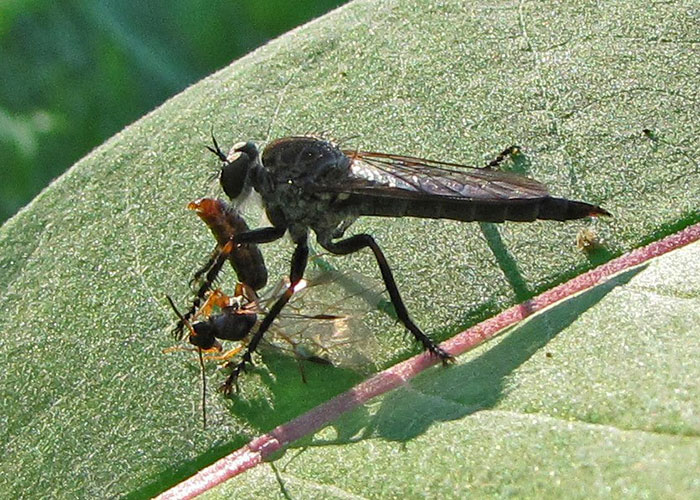 Bee Flies are little flying Teddy Bears that mimic bees and wasps. They hold their wings out to the sides when at rest. Like honeybees, they can hover in mid-air, giving them their name. They are sun-loving, day-flying nectar-feeders whose larvae (maggots) have a dark side.

According to The Insect Guide by Ralph B. Swain, bee fly eggs are laid on the ground near a bee or wasp nest or grasshopper egg pod. Once hatched, says Swain, the larvae find and “are parasites upon or inside the bodies of a wide range of larval and pupal wasps, bees, moths, butterflies, and beetles; others are predators inside the egg pods of short-horned grasshoppers.” The maggots of the progressive bee fly feed on, among other things, robber fly maggots. According to Eaton and Kaufman in the Field Guide to Insects of North America, female bee flies in the genus Anthrax, whose larvae parasitize solitary wasps, are called “bombers” because of their habit of hovering in front of the tunnel of a potential host and “lobbing” (his word) their eggs down into it.

Adult crane flies look disconcertingly like monster mosquitoes gathered on screens, but they don’t bite, and adults of some species don’t even eat. Like the other Dipterans, crane flies have two tiny, stemmed knobs called haltare on their thorax (look carefully at the pictures); these are a vestigial second pair of wings that are used for balance in flight. Their name comes from the adult’s long (“crane-like”) legs.

There are winged and wingless crane fly species that can be seen on the snow in mid-winter, challenging our assumptions about cold-bloodedness! 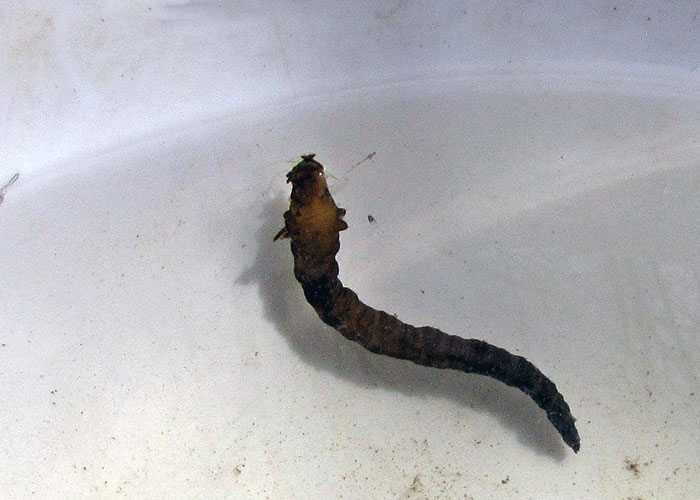 Crane fly larvae are one of the Bug Lady’s favorite aquatic critters. They are gray and plump and pinkie-finger-sized, with bristly ridges ringing some of the segments. Crane fly maggots come in terrestrial and aquatic models; both eat decaying vegetation (some even bore holes in wood), roots, or small invertebrates. The tough skin of terrestrial crane fly maggots has earned them the nickname “leatherjackets.” Fish find the larvae mighty tasty, and both the aquatic and the terrestrial maggots can be an important food for shorebirds that have long enough bills to reach them. Skunks and moles also feed on larvae they find in the ground, and birds and bats eat the adults.

The striking golden-backed snipe fly, about half-again as large as a house fly, appears on vegetation in damp areas during late May and early June. The BugLady usually sees them in late afternoon. 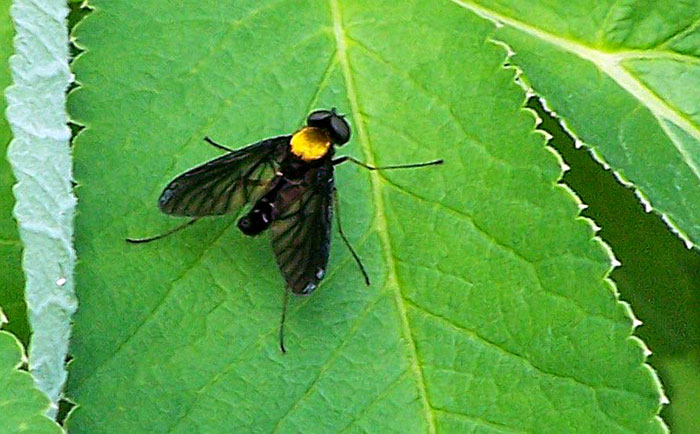 The “snipe-fly” part of its name comes from the rather prominent proboscis of some species, which, some creative/overwrought “Diptrologist” (OK, maybe the BugLady made up that word) thought was reminiscent of the avian Snipe. Golden-backed snipe flies are predators on aphids and other small insects, hanging head-down on vegetation, awaiting their prey. Other snipe fly species suck blood from small animals, and the adults of some western species do bite humans. The larvae, whether terrestrial or aquatic, are predators, mainly on other immature insects. Larvae of some western snipe flies do an “ant-lion” thing—digging cone-shaped pits in slippery sand/dust and then lurking at the bottom, waiting for insects to drop in for supper—and so are called “worm-lions.”

According to one source, snipe fly egg masses were collected, cooked and eaten by Native Americans.