A common prairie resident in late summer is a large, noisy, skittish Tachinid fly with a bristly, bulbous, shiny black abdomen; the BugLady wrote about them in BOTW’s infancy in 2008. Tachinidae is considered the second largest fly family (after the crane flies), and it’s suspected that once all the undiscovered species of Tachinids have been described and welcomed into the fold, it may become the largest fly family. The term “house-fly-like” is used to describe the family, and many family members can be confused with house flies (family Muscidae), blow flies (family Caliphoridae) and flesh flies (family Sarcophidae). But, in a family made up of more than 12,000 members (around 1,300 species in North America) there is considerable variation. Tachinids are found worldwide, but they’re most populous in the tropics. Taxonomically speaking, it’s a fairly young group (they’ve only been around since the middle Eocene—about 45 million years ago).

By definition, Diptera (flies) have only two wings. The hind pair has been modified into two knob-shaped organs called halteres that help the fly balance. The front wings of tachinids and several related groups have disc-like projections of the fore wings called calypters (from the Greek kalypter for covering or sheath) that cover the halteres. Other features that make a tachinid a tachinid are a bristly body (usually) and short, flat, three-segmented antennae with a modified bristle (called the arista) on the third segment that help it monitor moisture and temperature in its environment. Some are brightly-colored but many are drab, and many have very large eyes. 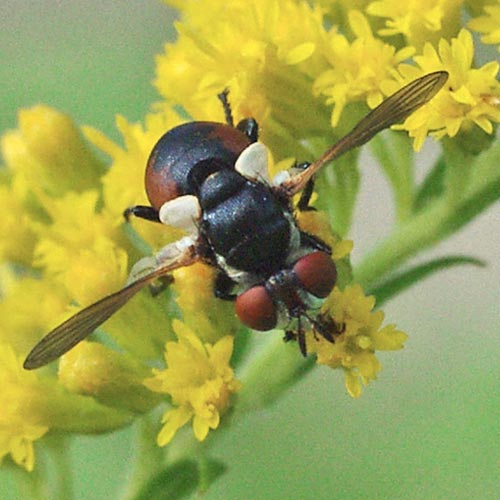 Tachinids attract our attention because of what they eat. The larvae of all species that have been studied are parasitoids (with a few parasites thrown in). Remember, a parasite doesn’t kill its host (because what would it do then?) but a parasitoid does. Parasitoids feed on the non-essential organs of its host first, and then the vital organs, timing the death of the host to correspond with the end of its larval stage. Parasitoids may attack their hosts at any stage of the host’s life, but only larvae can be parasitoids.

It’s the organisms they choose for their hosts that make tachinids interesting to us (OK—the mechanisms are pretty amazing, too). Hosts are chosen from throughout the Arthropoda (they’re mostly plant-eating insects with a few spiders and centipedes thrown in) and they include many (large, soft, slow-moving, conspicuous) caterpillars. There are lots of agricultural pests on their menu, like sunflower moths, codling moths, cabbage loopers, and gypsy moths, plus true bugs, beetles and grasshoppers. Their economic value as biological controls is huge, and non-native tachinids have been imported to attack non-native pests (on the other hand, some species also pick on honeybees and beneficial predaceous stink bugs and ground beetles, and sometimes, an imported tachinid “goes rogue” and impacts desirable native species like the giant silk moths). Adults feed on nectar from flowers (they’re considered pollinators) and on honeydew from aphids that falls on the leaves; some species don’t feed as adults. Most tachinids are endoparasitoids, feeding within their host, and most are generalists, with a range of species they prey on.

Within that basic game plan lay quite a variety of strategies, mainly around where the egg is laid and what stage the embryo is in when the egg is laid.

Plan A—A common (and probably ancestral) method is to lay a standard insect egg in a hard-to-reach spot on the outside of the host’s body (for example, on one of the last few segments of a caterpillar) or to inject it directly into the host’s body (this takes a little planning, probing for weak spots in a host’s exoskeleton). The embryo develops, the larva (maggot) hatches, and it burrows into the host. Females probably use sight and smell to guide them to the right plants and the right hosts, and possibly, auditory and tactile cues, too.

Plan B—Ovoviviparity. Viviparous means that the young develop inside Mom’s body, but not in an egg. Oviparous means that the female deposits an egg that will hatch. Ovoviviparous means that the young tachinids develop in eggs in Mom’s body, but they hatch there before being deposited as larvae (in insects, synonyms are larviparous and ovolarviparous). Females of many species carry a supply of ripe eggs and can hatch a larva “on demand” onto the host or onto flowers nearby, where it can stalk its own host. In between Plans A and B are species that store the egg in the ovary so that it has only a very short incubation period after it’s deposited.

Plan C—Mom deposits eggs directly onto the plants. A host may eat the egg while feeding, or the maggots may hatch out and go hunting on their own (in one group, Mom lays the eggs directly into the host’s mouth, but the BugLady doesn’t want to know any more about that). Tachinids that lay eggs on the vegetation or the ground, where connections to the host are random, lay more eggs than those that lay directly on hosts. When more than one larva ends up in a single host; they may duke it out within the host’s body or may develop side by side.

Once on board, the first-instar maggot feeds on hemolymph, the insect equivalent of blood. The serious feeding begins during the maggot’s second instar, when it feeds on its host’s tissues and fat, and when it also attaches itself to its host’s tracheal system so it can tap into its host’s oxygen. During this stage, the host’s immune system attempts to encapsulate the invading maggot, but because of its access to oxygen, the tachinid maggot is usually able to free its head end from the capsule and keep on eating. A host species’ susceptibility to this form of attack depends on the ability of its immune system to encapsulate a maggot successfully (one source referred to “coevolutionary arms races between parasitoid and host”). In the third instar, the host’s vital organs are eaten, and if the food runs out early, the adult tachinid will be stunted. Tachinid larvae seem to be unaffected by toxins its host has eaten. The larva may pupate with the host’s body or exit and pupate elsewhere.

The big, hairy, jumpy tachinid flies that the BugLady wrote about back in 2008 were (probably) Archytas apicifer. Adults can be seen on flowers, looking like mini-bumblebees, and their offspring are parasitoids of forest tent caterpillars, tiger moths, prominent moths, corn earworms, army worms, and tomato fruitworms. Several Monarch butterfly sites list Archytas sp. as monarch predators. 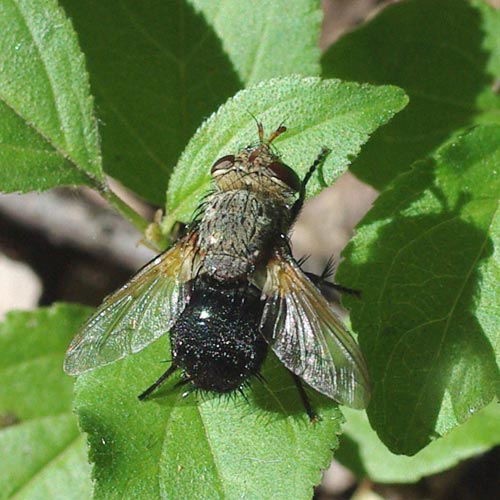 The next tachinid that the BugLady found was the excellent Feather-legged Fly (Trichopoda sp.), a completely different-looking critter (but with the same proclivities). They specialize in stink bugs, squash bugs, and leaf-footed bugs, and it is hoped that they’ll develop an appetite for the newly arrived (in Wisconsin) brown marmorated stink bug. 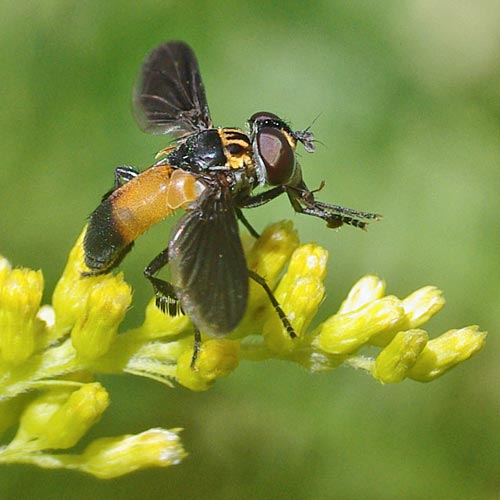 Since then, she has photographed a number of different-looking flies that, to her surprise, turned out to be tachinids, too. Meet Gymnosoma sp. (you generally can’t identify these guys to species with a photo). “Gymnosoma” means “naked body” and these house fly sized tachinids have few abdominal bristles. They lay their eggs on adult and nymphal stink/shield bugs. Adults drink nectar. 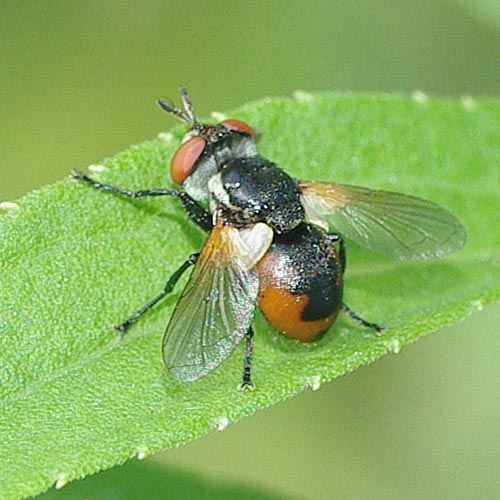 And Cylindromyia sp., a generalist feeder whose larvae develop in a variety of stink bugs that feed on fruit crops, moths, and on short-horned grasshoppers. Cylindromyia mimics wasps in color, shape and posture (but wasps have four wings). Its larvae also feed on some of the beneficial predatory stinkbugs, so it gets mixed reviews. 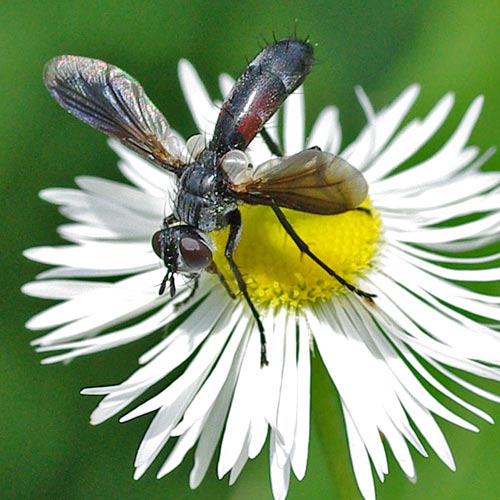 The BugLady thinks this is Belvosia sp., a predator of a number of moth caterpillars in the sphinx moth and silk moth families. Buck moth caterpillars, species of species concern in Wisconsin, are among its target species. 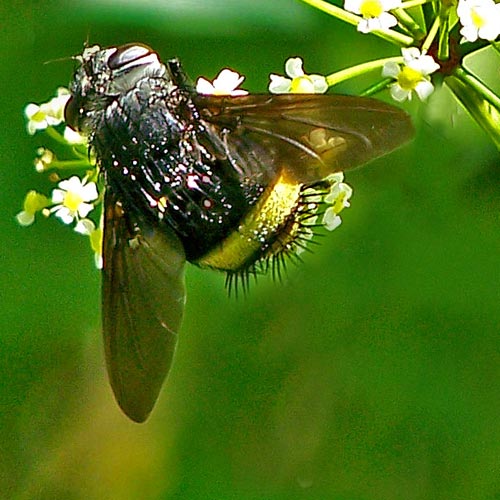 The Swallowtail That Got Away (Family Papilionidae)