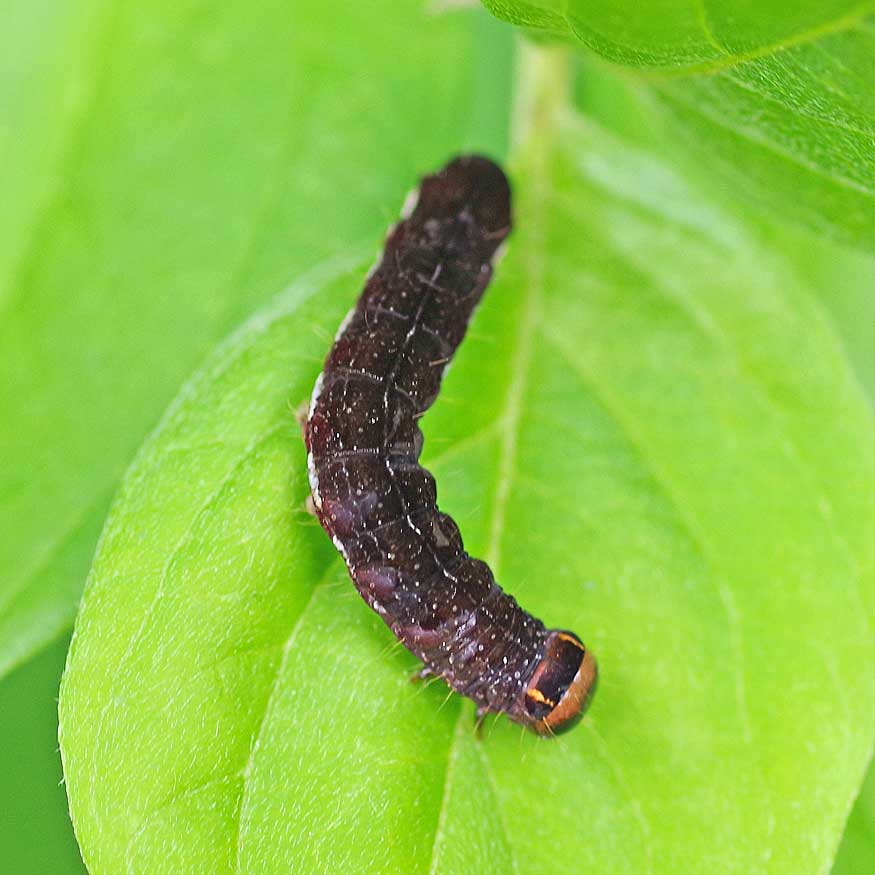 The BugLady found this velvety, deeply maroon caterpillar at the Land Trust’s CESA site on a fine June day. It’s the larva of a Straight-toothed sallow moth (Eupsilia vinulenta) (probably). (Full disclosure – the experts caution us that the only way to positively ID an Eupsilia caterpillar is by rearing it to an adult.)

Sallows are a group of Owlet moths (family Noctuidae) that are pretty hardy – depending on the latitude, moths may be active all winter, or overwintering adults may emerge from hibernation, fly around, and visit maple sugaring operations on balmy winter days when the temperature climbs above freezing (For a scenic side trip, see “Insects attracted to Maple Sap: Observations from Prince Edward Island, Canada .”). One source reported seeing the moths searching for warmer shelters on sub-freezing nights, shelters they locate using their antennae.

In Caterpillars of Eastern North America, David Wagner notes that sallows readily come to sugar baits (Eupsilia species “gather by the hundreds at beer or sugar or other baits”). He recommends to us Holland’s description of baiting moths, and the BugLady is grateful to the Alberta Lepidopterists Guild for posting it . They just don’t write science like that anymore.

The Moth Book by W.J. Holland was published in 1904, and with 48 (XLVIII) plates crammed with images, it was for decades the moth Bible. (The down side was that moths are pictured like the pinned specimens that they are, with their wings spread, rather than perched naturally.) By 1926, it had joined five other books in a set called The Nature Library, and the set that the BugLady grew up with her nose in probably belonged to her Mom.

Kirk Mona, in his Twin Cities Naturalist blog found an alternate name for the Straight-toothed sallow – he says “The name the Satellite comes from the little spots that seem to orbit like satellites around the larger spot on the fore wings. What a cool name! It is much cooler than ‘Straight-toothed Sallow’ .”

Adults are variable in color, from pale to brown, to rust . They mate in late winter and early spring. Here are the eggs . Adults nectar on early tree flowers like red maple.

Caterpillars are somewhat generalist feeders, found on the leaves of an assortment of shrubs and trees like box elder, oak, cherry and maple. Wagner says that younger larvae are “new-leaf specialists that fashion crude leaf shelters in young leaves,” and they may use the abandoned shelters made by other caterpillars. According to Owlet Caterpillars of Eastern North America, older caterpillars are found on the in leaf litter on the ground and may feed on low-growing plants or on plant material (like old flowers and catkins) that’s fallen off of trees.

On another front, Monarch butterflies are starting to reach our southern borders.  Here’s info about the status of Monarch populations in 2021 . And here’s an animated 2021 Monarch migration map.

Go outside – look for moths (and listen for owls, too)!

And Now for Something a Little Different X — Pileated Woodpeckers