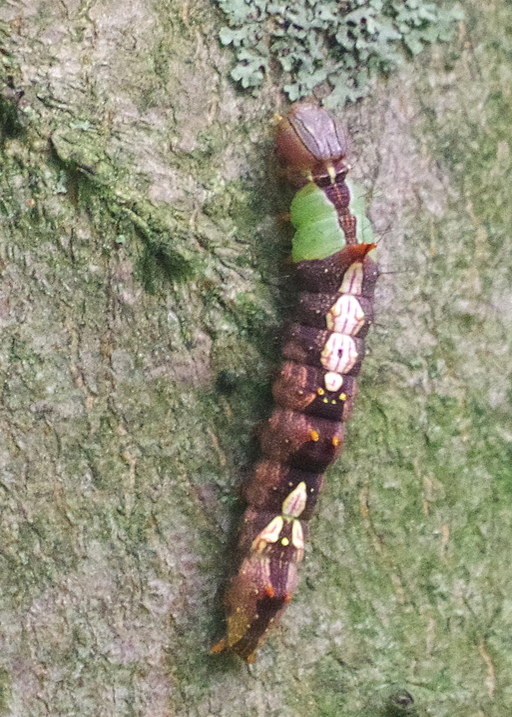 As she cruises through her moth books trying to identify what she’s photographed, the BugLady sees pictures of AMAZING caterpillars – not drab brown or grass-green caterpillars, but caterpillars that eschew camouflage in favor of some pretty gaudy togs (she has a Caterpillar Wish List that may require a Caterpillar Road Trip). For example: (All links on this page are to external sources.)

Some brightly-patterned caterpillars advertise their toxicity, but others blend in because their color patches break up the outline of their body. 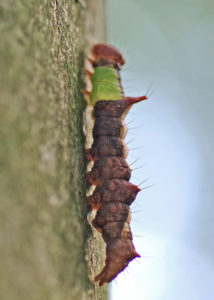 She thought she had checked off one of the caterpillars on her list this summer. It was head-high and moving smartly up a tree trunk at the Bog when she saw it, and her preliminary (and secondary) ID was a Unicorn moth caterpillar. Then she checked other genus members and changed her mind (and is hoping that she dodged a “publish in haste; repent at leisure” moment). It’s (probably) the closely-related Morning-glory Prominent (Schizura ipomoeae). (Ipomoea is the genus of morning-glory.) Unicorn caterpillars lack the striped head and that extra hump on mid-abdomen that the Morning-glory Prominent has, and the hairs on their abdomen are shorter. Here’s a better shot of the Morning-glory, and here’s the Unicorn.

No road trip is needed for the Morning Glory Prominent. It lives in deciduous woodlands across the US and southern Canada. One reference called it “common,” and it well may be, but both caterpillar and adult are awesomely camouflaged.

There are eight species in the genus Schizura in North America north of the Rio Grande. They’re in the family Notodontidae (the Prominent moths), a family that, according to Wagner in Caterpillars of Eastern North America “includes many of the most handsome and behaviorally interesting caterpillars in the temperate zone.” 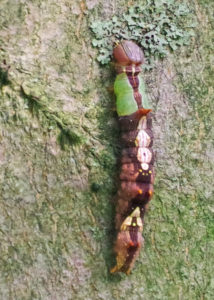 Notodontid/Prominent caterpillars are pretty cool. They’re big, with large heads, and some sport a variety of lumps and spines and decorations on their sometimes-whimsically-shaped bodies. You can find them perched on leaves in the daytime. Maybe. A “work-around” practiced by some Notodontid caterpillars involves girdling a tree stem and spreading liquid on the cuts; substances in the liquid depress a plant’s usual chemical defenses to grazing.

Caterpillars in the genus Schizura have a gland that produces a mixture of formic and acetic acids along with “lipophilic” (fat-loving) compounds. This concoction is delivered as a spray that the caterpillar can direct with accuracy up to six inches away. The gland is located right behind the head, and the spray comes through a slit in the “neck” (though some sources said it was in one of the humps). In his write-up about the Unicorn caterpillar in Moths and Caterpillars of the North Woods, Sogaard says that these glands may be so large that they “can occupy a tenth of the caterpillar’s volume,” and the BugLady assumes the Morning-glory Prominent is similar. The lipophilic compounds help the liquid to spread on and penetrate the victim’s exoskeleton/skin (it can raise a painful blister on humans).

Adult Morning-glory Prominents have wingspans of 1¾” and they’re somewhat variable in color. A rolled-up posture makes them look like broken twigs.

According to bugguide.net, caterpillars of the Morning-glory Prominent “feed on the leaves of beech, birch, elm, maple, oak, rose [including apple trees], and other woody plants; probably not on morning-glory.” Which is probably why it has alternative names like False Unicorn Caterpillar and Checkered-fringe Prominent. They are gregarious as young caterpillars and loners later – the young caterpillars feed on the leaf’s under-surface, skeletonizing it; and the older stages eat inward from the leaf edge, carving a half-circle out of the edge and curling into it, looking like a damaged leaf. They overwinter in suspended animation as pre-pupae, ready to pupate in spring.