Phyllis Fast, PhD visited UWM as part of the Visualizing Sovereignty art show at the UWM Union Art Gallery. She, along with UWM native faculty members, Bernard Perley, PhD and Kimberly Blassier, PhD, did a presentation on “Did any of it work?: A Retrospective Analysis of Alaska’s Artistic Efforts Toward Indigenous Well-Being.”
She is originally from Anchorage and is a member of the Athabascan First Nation of Alaska. More specifically she is Koyukon Athabascan; Koyukon refers to the specific tribe of the 11 languages spoken by First Nation people of Alaska. 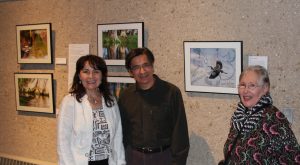 Dr.s Blaeser, Perley, and Fast in the Union Art Gallery in front of some of Dr. Blaeser’s photos. 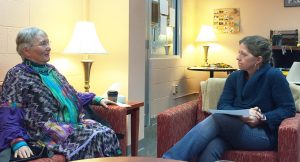 Dr. Fast with the interviewer, M. Paradise, in the EQI office.

Dr. Fast is a petite, intense artist. Her vibrant personality is reflected in her wardrobe. While speaking her intense gaze at times left me feeling as though my soul was laid bare for her examination. Dr. Fast utilized art as a way to change the energy, the “vibe”, in a class. Most often she would employ open drawing exercises as a way to open up and reconnect the creative (non-verbal) mind to the non-creative (verbal) mind. A telling story of this working is her story of the “Gang of 8” as a group of students that sat together at a large table at the back of the class became known.“They were so BORED with me”, Dr. Fast said, “So I told them to each pull out a bit of paper and to draw ‘your water’.” Most of the students, not being artistic, nor native, were confused by this vague instruction. She gave each of the students a few minutes then instructed them to trade the art with another student in the group and for that student then to work with what had been started by the other. “The transformation only took about 30 minutes”, she continues, “The drawings went from stiff to being much better.” 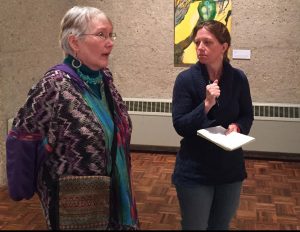 When I asked her to help me understand what she meant by “stiff” and “better” Dr. Fast laughed lightly and explained that “stiff” meant “white”, very linear, and specifically defined. Compared to the resulting art had creative was from more of a Native perspective because the result was from a collaborative effort of many and not the work of just one. It was a meaningful experience for Dr. Fast as it illustrated what can be enriched and added by another through the use of collaboration (vs competition or isolation). In closing the story, Dr. Fast lamented: “I am not sure what exactly triggered that synergy among that ‘Gang of 8’ and have tried to recreate it but have not ever succeeded to such an extent”.
It was not until Dr. Fast was well into adulthood studying anthropology that she started to connect to her Native identity. Prior to that time, she struggled to verbally express her Native Identity. She uncovered her Native expression through art. Unfortunately at the time, “no one liked it” says Dr. Fast speaking of her art, “They didn’t get it.”
While visiting her pieces in the art show (currently running through December 12, 2014) I was drawn to an element in many of her paintings. Circles. In some paintings, the circles are few and large, others many and small. “They are spirit holes”, Dr. Fast explains, “A portal through which the spirit can come through and be seen and or heard.” 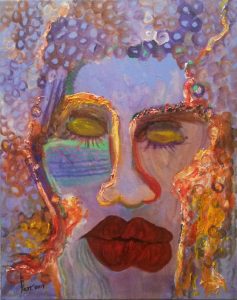 One of Dr. Fast’s pieces struck a strong cord with me. A face surrounded by spirit holes. “In Honor of A J” is her attempt to describe the many shades of grief that she felt as she help dress a teenager’s body for burial. She created the piece after the suicide (overdose) death of a young woman that she had known for many years.

Suicide is the second leading cause of death among American Indians/Alaska Natives aged 15- to 34-years. The suicide rate among American Indian/Alaska Native adolescents and young adults ages 15 to 34 (31 per 100,000) is 2.5 times higher than the national average for that age group (12.2 per 100,000). According to the CDC, Native Americans are the highest of all races to commit suicide. There are a number of organizations that have been started in an attempt to address this epidemic.