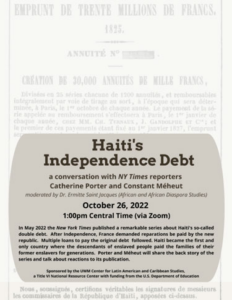 a conversation with NY Times reporters

In May 2022 the New York Times published a remarkable series about Haiti‘s so-called double debt. After Independence, France demanded reparations be paid by the new republic. Multiple loans to pay the original debt followed. Haiti became the first and only country where the descendants of enslaved people paid the families of their former enslavers for generations. Porter and Méheut will share the back story of the series and talk about reactions to its publication.

Sponsored by the UWM Center for Latin American and Caribbean Studies, a Title VI National Resource Center with funding from the U.S. Department of Education