The cutting-edge research conducted by UWM’s world-class faculty members continues to pay entrepreneurial dividends. A perfect example is the work done by the Milwaukee Institute for Drug Discovery, which performs foundational research into drug compounds that have the potential to develop into life-changing treatments. One such discovery attracted the attention of a startup company, which is now investing time and resources into moving the research forward. Work like what is described in the story below illustrates why UWM is one of America’s top research universities and has a $1.5 billion impact on the state’s economy.

In his 40-year career at the University of Wisconsin-Milwaukee, James Cook has hunted for new drugs to treat illnesses of the central nervous system without the adverse effects of existing medications, such as sedation or dependence. From this work, Cook, a distinguished professor of chemistry, has assembled a vast library of compounds that enables drug development for anxiety, depression, epilepsy and pain treatment, all grounded in innovative science. 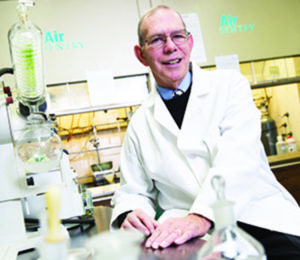 His patents captured the attention of Neurocycle Therapeutics, a startup interested in bringing such drugs to the market. In 2019, Neurocycle took an option to license one group of Cook’s compounds, set up a research lab on the UWM campus, and employed several UWM students to do a year of testing. The startup was awarded federal grant money available to investigate new drugs for a rare form of childhood epilepsy.

Getting a new drug to the market is a long and expensive process. Transitioning research into new ventures helps to fund later stages of development, says Doug Stafford, director of the Milwaukee Institute for Drug Discovery (MIDD).

Startups like Neurocycle are attracted to the MIDD not only by the novelty of the research, but also the assistance with drug validation and access to facilities such as the Shimadzu Laboratory for Advanced and Applied Analytical Chemistry, which has mass spectrometry instruments necessary to advance drug development.

The MIDD’s impact is significant. Since its inception in 2011, the MIDD has spawned one UWM drug-related startup company (with $4 million in research grants behind it) and nurtured four others. Of its 21 patents and patent applications, five are optioned or licensed.

The MIDD has matured simultaneously with UWM’s entrepreneurial curriculum, which has put innovative thinking squarely into the university’s educational fabric across disciplines. That includes the state’s only I-Corps site, established with funding from the National Science Foundation. Led by the UWM Research Foundation, I-Corps programming instructs academics about how to turn lab discoveries into startup companies.

“New venture creation is showing the economic development impacts of MIDD research,” Stafford says. “These are impressive projects that have great potential for improving health care.”

There are currently no upcoming events.