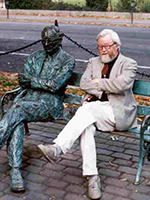 John Gleeson is well-known in the community as a speaker, storyteller, playwright, founder of Milwaukee Irish Arts, and Milwaukee Irish Fest cultural advisor. He is founding director Emeritus of the Center for Celtic Studies at UWM, and is a founder of the Irish Cultural Heritage Center.

Following a distinguished career with the Guinness Brewing Corporation, John moved to Milwaukee from his native Dublin in 1980. He holds a M.A. degree in Applied History and a M.F.A. in Film from the UW-Milwaukee.

He is a regular contributor to print and broadcast media on Irish issues. John was voted 1993 “Irishman of the Year,” 2006 “Wisconsin Celtic Person of the Year” and is numbered among Irish America Magazine’s “Top 100.”