The Center constitutes an annual group of faculty Fellows in order to support their innovative humanities research with an eye towards expanding interdisciplinary networks of knowledge creation. UWM faculty, and faculty from other UW System schools and beyond, are selected to participate as Fellows.

The Center also hosts faculty from other countries who come to us with Fulbright or ACLS Fellowships, or support from their own institutions. Typically, the Center provides these International Fellows of the Center, as they are designated, with an office in the Center along with the other Center Fellows and as much research assistance, including library privileges, as possible.

A cadre of Graduate Fellows are also supported by C21. These fellows are pulled from the ranks of UWM graduate students across the disciplines, and C21 is proud to support their academic research as they work to help run the day-to-day operations of the Center and its programming. 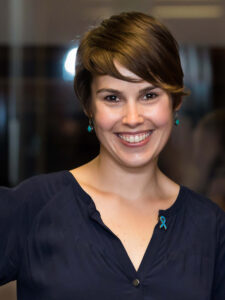 Maria Novotny is an Assistant Professor of English at the University of Wisconsin-Milwaukee, where she teaches in the Rhetoric, Professional Writing, and Community Engagement program. Much of her research is focused on how reproductive health patients advocate for their healthcare needs. A question she is exploring during fellowship year is: What are the tensions and uncertainties surrounding the language used to describe families created through alternative means (i.e. embryo donation, surrogacy, adoption)?

Derek Handley is a Navy Veteran and an assistant professor in the English Department at UW-Milwaukee. His research interests and areas of specialization include African American Rhetoric and Literature, Rhetorical History, and Rhetorics of Place. A question he is exploring during his fellowship year is: How did African American communities in the urban North respond to targeted urban renewal development in the 1950s and 1960s?

Christine Evans is an associate professor of History at UW-Milwaukee whose work focuses on Modern Russia and Eurasia, the history and theory of mass communications, socialist cultures in comparative perspective, and play, leisure, and consumption. She is the author of Between Truth and Time: A History of Soviet Central Television (Yale University Press). A question she is exploring during her fellowship year is: How did the socialist world shape global media? Ben Balcom is a filmmaker, educator, and independent programmer. His films have been exhibited at venues and festivals such as the European Media Festival, Media City Film Festival, Anti-Matter Media Arts, Alchemy Film, Ann Arbor Film Festival and Slamdance. Combining elements of documentary, fictional narrative, and abstraction, Balcom’s cinematic vocabulary is multi-faceted. He has explored melodrama, metaphysics, and, most recently, the politics of landscape. He is also the co-founder and co-programmer of Microlights Cinema. A question he is exploring during his fellowship year is: How might we understand the principle of enclosure as an active force in everyday life and how might that force be depicted in the aesthetics of cinema? 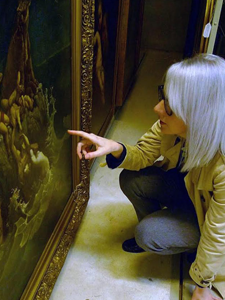 Sarah Schaefer is an assistant professor of modern art at UW-Milwaukee. Her research and teaching interests include 18th and 19th-century European visual cultures, modern religious imagery, and medieval revivalisms. A question she is exploring in her fellowship year is: How and why did conceptions of faerie and the fantastic manifest in visual and material terms in the nineteenth-century popular imagination, and, more broadly, how can the field of art history contribute to the developing discourses on fantasy cultures?

Within C21 Laya focuses her attention on our communications and archives. She is in charge of our email lists, newsletter, and social media accounts (Twitter: @center21, Facebook: Center for 21st Century Studies, Instagram: @c21cs). Outside of C21 Laya is a Cultural Anthropologist, Game Designer, and TTRPG Gaymer. She is a PhD Candidate in the Anthropology Department at UWM working on play in the pandemic and did her fieldwork within analog gaming communities during their migration and adjustment to online spaces between January 2020 and April 2021. Her previous work focused on institutionalized play and has moved to understand what happens to our play practices and fieldwork methodologies during moments of cultural trauma and when the mediums of our practices are forced to change.

Randolph Marcum focuses on running the website for C21, as well as helping to organize online events. He is a sixth-year PhD. candidate in the English department in the Literature and Cultural Theory track, with his research focusing on science fiction, affect, and media theory. He has also served as the plan representative for Literature and Cultural Theory. He enjoys strategy games and tabletop gaming in his free time.

Nasim Shareghi is a PhD candidate in Architecture at UWM. Her research focuses on human and nonhuman interaction in the built environment exploring ethical, biological and architectural aspects of this interaction. Currently, she works on the UWM Bird Conservation Project. With an interdisciplinary team of faculty, students and university administrators, they signed up to the American Bird Conservancy (ABC) program to be certified as a Bird-Safe Campus.