***We’re sad to announce our spring conference, #ALT_MKE: Stories of a 21st Century City, has been cancelled. It was going to be an extraordinary gathering, but in many ways, the work of the conference must now be done in our communities and in the forms of care and activism that we practice. Stay safe!***

A conference at the Center for 21st Century Studies, the University of Wisconsin-Milwaukee
April 30-May 2, 2020 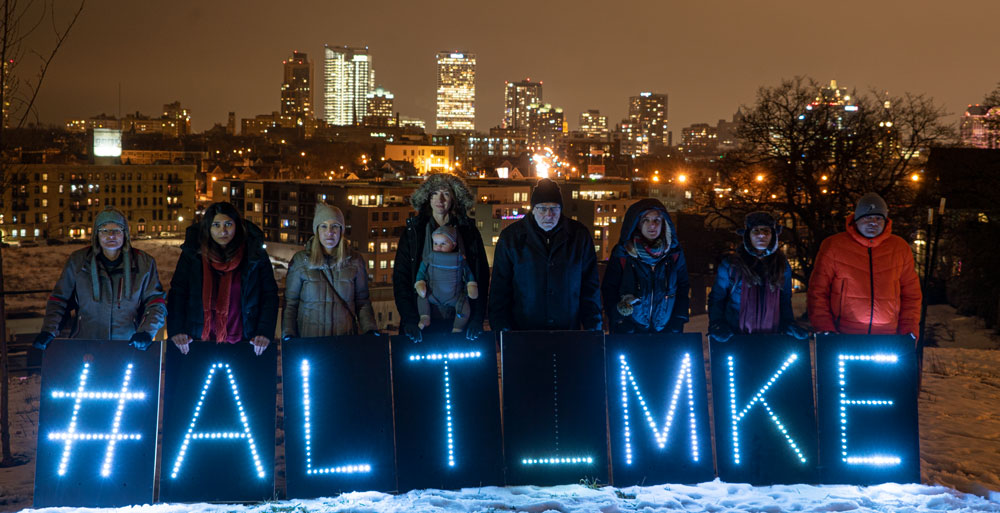 In July 2020, the City of Milwaukee will host the Democratic National Convention where leaders will gather to nominate a presidential candidate and to ratify a platform with national and global agendas. The DNC chose Milwaukee because it sees Wisconsin as emblematic of the key Midwestern and post-industrial states that the Democrats must win to retake the presidency. In turn, Milwaukee sought to host the Democratic Convention as an opportunity to remake its image as a thriving, multicultural city.

During the DNC, predictable narratives will be trotted out about Milwaukee: of segregation, crime, poverty, and blight, alongside those championing a resurgent economy and new forms of capitalist urban development. The DNC marks a supposedly transformational moment from which new solutions will emerge. But the narratives of blight and rebirth–articulated not only by political leaders but often by academics as well–often reify what they are intended to counteract. The spectacle of the DNC and of its capitalist solutions mask a panoply of more ordinary efforts underway all around us, as movements, activists, and everyday people demand new ways of seeing, organizing, and acting in the world to address the overwhelming crises of the day. Indeed, Milwaukee is like many cities in the US: a babel of ecological, social, and political perspectives, a metropolis at a crossroads of critical thinking, and a place of promise and failure.

UWM’s Center for 21st Century Studies explores these multiple perspectives in its spring 2020 conference, “#ALT_MKE: Stories of a 21st Century City.”  At this critical juncture, we must rethink our political imaginations and critical engagements. Can Milwaukee, and other urban areas like it, offer novel answers to the intractable problems that confront us?  If the city is an answer, what questions must we ask?

#ALT_MKE will highlight how the temporality and space of the ordinary city offers new epistemologies and practices that are engaged in the global struggle to combat racialized disinvestment, a fractured body politic, ecological crisis, and urban abandonment. The spectacles offered by the DNC–whether political, mediated, or financial in nature–lead only to institutional inaction and failure, wherein lie opportunities for ongoing forms of resistance to find new and stronger footings.

From the Situationists and Russian Constructivists, to suffragists, tactical urbanists, the Movement for Black Lives, and the Occupy movement, people have always imagined and sought new ways of life to challenge oppressive structures and violent erasure. Under the increasingly dire pressures of climate crisis, racial capitalism, ongoing settler displacement, destructive national politics, and crushing inequality, the time has come to reclaim our future by reframing these issues through the refocused lens of the 21st century city.

At the core of this investigation is our focus on reframing cities as political and ideological acts that hold within them normative values of aesthetics, power/resistance, public life, and citizenship. By inviting explorations of critical, decolonial, anti-racist politics, this conference hopes to bring together new forms of analysis, methods of urban historiography, organizing, and engaged forms of scholarship.

The conference seeks to highlight the undercommons and the counternarratives fomented in the ordinary life of spaces and places. We will ask how contested knowledges and stories of a city may be experienced across different and intersecting power relations that organize bodies and space. We hope that accounts of everyday practices, local knowledges, and organizing will help illuminate how urban residents resist, adapt and reformat conventional structures of power, governance, and order. We do not expect to find a single solution, but to foster a variety of grounded strategies and projects that we aim to highlight, bring together, and learn from.

The call for proposals deadline has passed. Please keep an eye on the conference website for updates on registration, the conference schedule, and more.

C21’s annual international conferences promote cross-disciplinary research in the humanities, arts, and social sciences. Plenary papers delivered at each conference are typically reworked into peer-reviewed essays that appear in our book series with the University of Minnesota Press (and earlier with Indiana University Press).

For more details on previous yearly themes, view our archive of past conferences.