Ronak Kapadia: “Reimagine Everything: How Insurgent Aesthetics and Queer Collective Care are Transforming Our Worlds” 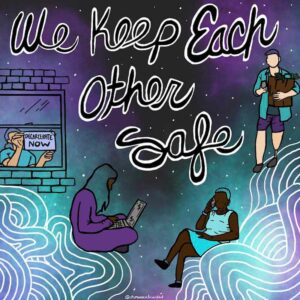 Monica Trinidad, We Keep Each Other Safe, monicatrinidad.com

Join us for a conversation with Ronak K. Kapadia (UIC) as he explores how the Black and brown Midwest has become the epicenter of a twenty-first century insurgent rebellion against the dominant militarized policing order in the United States. From abolition to healing justice and transformative justice and mutual aid, a new generation of visionary artists and activists from queer and trans Black Indigenous and People of Color (QTBIPOC) communities are offering a crucial wellspring for ideas about survival, healing, and justice in the waning years of twenty-first century US empire. These strategies and tactics circulate widely within contemporary social movements that are working to turn the tide against prisons, policing, and American warfare. At a time when the proliferating calamities of global fascism, neoliberal austerity, carceral governance, climate chaos, and endless warfare appear to be ascendant across the planet, how do minoritarian cultural workers living and laboring in the heart of empire make sense of this dying world order while dreaming up new worlds through their art-making and organizing? The ecology of minoritarian art and activism emerging from today’s overlapping protest movements offer a powerful roadmap for understanding the dystopian here and now of US imperial decline and imagining rebellious futures that can move us from despair and isolation to coalition and transformation.

This event is cosponsored jointly with the Cultures & Communities program.

**Please note: Closed captioning will be provided by YouTube within 24 hours after the event has concluded. 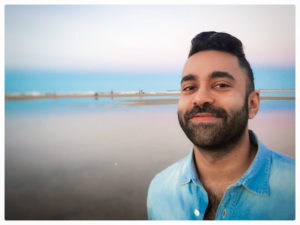 Ronak K. Kapadia is Associate Professor and Director of Graduate Studies in the Gender and Women’s Studies Program at the University of Illinois at Chicago. He is the author of Insurgent Aesthetics: Security and the Queer Life of the Forever War (Duke University Press 2019) and at work on a new book-length project titled “Breathing in the Brown Queer Commons: Migrant Futurisms of Survival/Healing/Justice.”